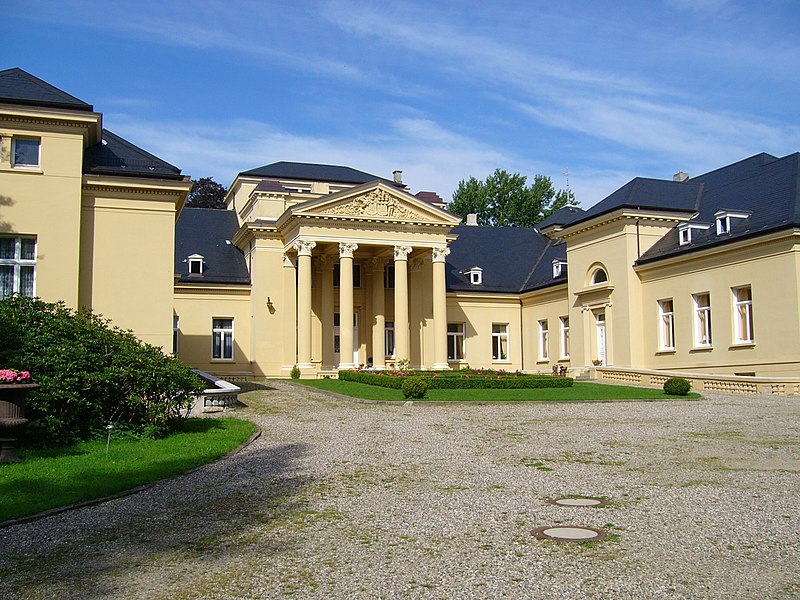 Lehmkuhlen is a municipality in the district of Plön, in Schleswig-Holstein, Germany.

listen); Danish: Slesvig-Holsten) is the northernmost of the 16 states of Germany, comprising most of the historical duchy of Holstein and the southern part of the former Duchy of Schleswig. Its capital city is Kiel; other notable cities are Lübeck and Flensburg.

The former English name was Sleswick-Holsatia, the Danish name is Slesvig-Holsten, the Low German name is Sleswig-Holsteen, and the North Frisian name is Slaswik-Holstiinj. Historically, the name can also refer to a larger region, containing both present-day Schleswig-Holstein and the former South Jutland County (Northern Schleswig) in Denmark.

The Duchy of Schleswig or Southern Jutland was originally an integral part of Denmark, but was in medieval times established as a fief under the Kingdom of Denmark, with the same relation to the Danish Crown as for example Brandenburg or Bavaria vis-à-vis the Holy Roman Emperor. Around 1100, the Duke of Saxony gave Holstein, as it was his own country, to Count Adolf I of Schauenburg.

Schleswig and Holstein have at different times belonged in part or completely to either Denmark or Germany, or have been virtually independent of both nations. The exception is that Schleswig had never been part of Germany until the Second Schleswig War in 1864. For many centuries, the King of Denmark was both a Danish Duke of Schleswig and a German Duke of Holstein. Essentially, Schleswig was either integrated into Denmark or was a Danish fief, and Holstein was a German fief and once a sovereign state long ago. Both were for several centuries ruled by the kings of Denmark. In 1721, all of Schleswig was united as a single duchy under the king of Denmark, and the great powers of Europe confirmed in an international treaty that all future kings of Denmark should automatically become dukes of Schleswig, and consequently Schleswig would always follow the same order of succession as the one chosen in the Kingdom of Denmark.

The German national awakening that followed the Napoleonic Wars gave rise to a strong popular movement in Holstein and Southern Schleswig for unification with a new Prussian-dominated Germany. This development was paralleled by an equally strong Danish national awakening in Denmark and Northern Schleswig. This movement called for the complete reintegration of Schleswig into the Kingdom of Denmark and demanded an end to discrimination against Danes in Schleswig. The ensuing conflict is sometimes called the Schleswig-Holstein Question. In 1848, King Frederick VII of Denmark declared that he would grant Denmark a liberal constitution and the immediate goal for the Danish national movement was to ensure that this constitution would not only give rights to all Danes, i.e., not only in the Kingdom of Denmark, but also to Danes (and Germans) living in Schleswig. Furthermore, they demanded protection for the Danish language in Schleswig (the dominant language in almost a quarter of Schleswig had changed from Danish to German since the beginning of the 19th century).

A liberal constitution for Holstein was not seriously considered in Copenhagen, since it was well known that the political élite of Holstein were more conservative than Copenhagen’s. Representatives of German-minded Schleswig-Holsteiners demanded that Schleswig-Holstein receive its own constitution and that Schleswig join Holstein as a member of the German Confederation. These demands were rejected by the Danish government in 1848, and the Germans of Holstein and southern Schleswig rebelled. This began the First Schleswig War (1848–51), which ended in a Danish victory at Idstedt.

In 1863, conflict broke out again when King Frederick VII of Denmark died without legitimate issue. According to the order of succession of Denmark and Schleswig, the crowns of both Denmark and Schleswig would pass to Duke Christian of Glücksburg, who became Christian IX); the transmission of the duchy of Holstein to the head of the (German-oriented) branch of the Danish royal family, the House of Augustenborg was more controversial. The separation of the two duchies was challenged by the Augustenborg heir, who claimed, as in 1848, to be rightful heir of both Schleswig and Holstein. The promulgation of a common constitution for Denmark and Schleswig in November 1863 prompted Otto von Bismarck to intervene and Prussia and Austria declared war on Denmark. This was the Second War of Schleswig, which ended in Danish defeat. British attempts to mediate in the London Conference of 1864 failed, and Denmark lost Schleswig (Northern and Southern Schleswig), Holstein, and Lauenburg to Prussia and Austria.

Following the Austro-Prussian War in 1866, section five of the Peace of Prague stipulated that the people of Northern Schleswig would be consulted in a referendum on whether to remain under Prussian rule or return to Danish rule. This condition, however, was never fulfilled by Prussia.

Following the defeat of Germany in World War I, the Allied powers arranged a plebiscite in northern and central Schleswig. The plebiscite was conducted under the auspices of an international commission (the Commission Internationale de Surveillance du Plébiscite au Slesvig), which designated three election zones to cover the northern, central, and southern parts of Schleswig. The prevailing vote in an entire zone was to decide the outcome, even if voters in a single Kreis (district) or city voted differently. In Northern Schleswig (10 February 1920), 75% voted for reunification with Denmark and 25% voted for Germany. In central Schleswig (14 March 1920), the results were reversed; 80% voted for Germany and just 20% for Denmark, primarily in Flensburg. No plebiscite was ever held in Zone III (southern Schleswig), as Denmark waived an election in this zone.

Kiel is the state’s capital and largest city.

Lübeck is famous for its marzipan industry. According to local legend, marzipan was first made in Lübeck, possibly in response either to a military siege of the city or a famine year. The story, perhaps apocryphal, is that the town ran out of all food except stored almonds and sugar, which were used to make loaves of marzipan “bread”.

The city of Lübeck was the centre of the Hanse, and its city centre is a World Heritage Site today. 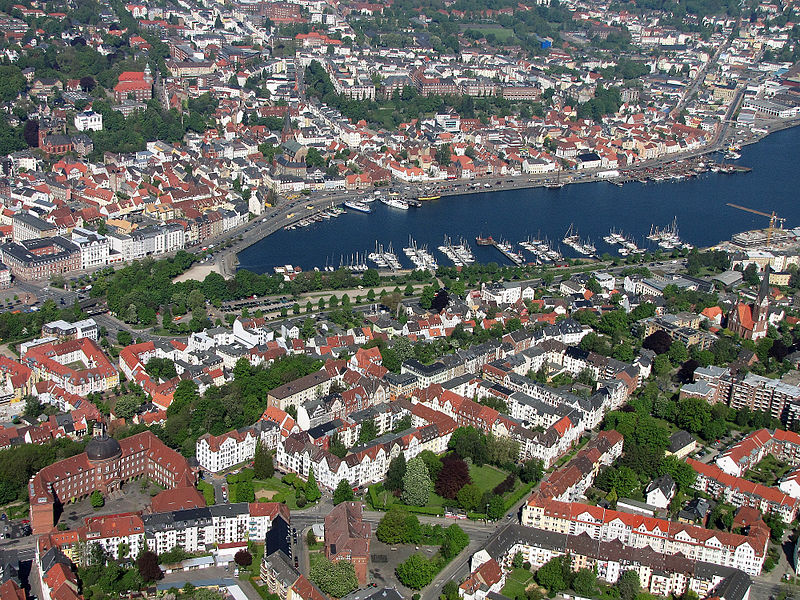 Flensburg (above and below) 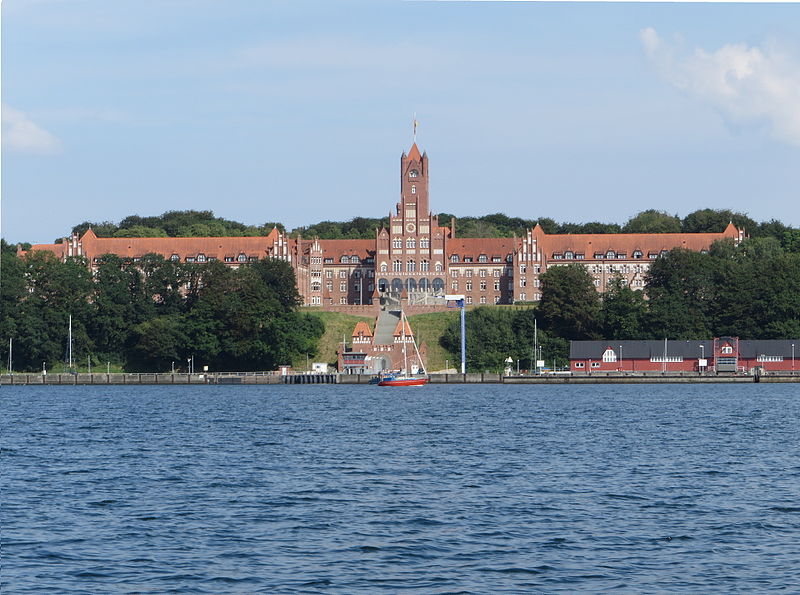 The Mürwik Naval School (German: Marineschule Mürwik) is the main training establishment for all German Navy officers and replaced the German Imperial Naval Academy in Kiel.

It is located at Mürwik which is a part of Germany’s northernmost city, Flensburg. Built on a small hill directly by the coast, it overlooks the Flensburg Fjord.

Flensburg is Germany’s second most northerly placed city (after Westerland,) and it lies barely 4 miles from the Danish border.