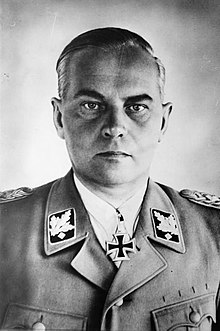 Felix Martin Julius Steiner (23 May 1896 – 12 May 1966) was a German SS commander during the NS era. During World War II, he served in the Waffen-SS, the combat branch of the SS, and commanded several SS divisions and corps. He was awarded the Knight’s Cross of the Iron Cross with Oak Leaves and Swords. Together with Paul Hausser, he contributed significantly to the development and transformation of the Waffen-SS into a combat force made up of volunteers and conscripts from both occupied and un-occupied lands.

Steiner was chosen by Heinrich Himmler to oversee the creation of and then command the SS Division Wiking. In 1943, he was promoted to the command of the III SS Panzer Corps. On 28 January 1945, Steiner was placed in command of the 11th SS Panzer Army, which formed part of a new Army Group Vistula, an ad-hoc formation to defend Berlin from the Soviet armies advancing from the Vistula River.

On 21 April, during the Battle for Berlin, Steiner was placed in command of Army Detachment Steiner, while Adolf Hitler ordered Steiner to envelop the 1st Belorussian Front through a pincer movement, advancing from the north of the city. However, as his unit was outnumbered by ten to one, Steiner made it clear that he did not have the capacity for a counter-attack on 22 April during the daily situation conference in the Führerbunker.

After the capitulation of Germany, Steiner was imprisoned and indicted as part of the Nuremberg Trials. He was cleared of war crimes charges and released in 1948. He was a founding member of HIAG, a lobby group of “negationistic apologists”, founded by former high-ranking Waffen-SS personnel in 1951 to campaign for the legal, economic and historical rehabilitation of the Waffen-SS.

Born in 1896, Felix Steiner joined the Royal Prussian Army as an infantry cadet. During World War I, he was awarded the Iron Cross 1st and 2nd class. In 1919, Steiner joined the paramilitary Freikorps in the East Prussian city of Memel and was incorporated into the Reichswehr in 1921. In 1933, he left the army having attained the rank of major.

Steiner first joined the NS Party (NSDAP) (membership number: 4,264,295) and the Sturmabteilung (SA). In 1935 he enlisted in the SS. He took command of a battalion of SS-Verfügungstruppen (SS-VT) troops, and within a year had been promoted to SS-Standartenführer; and later was put in command of the SS-Deutschland Regiment.

At the outbreak of World War II, he was SS-Oberführer (general) in charge of the Waffen-SS regiment SS-Deutschland. He led this regiment through the invasion of Poland and the Battle of France, for which he was awarded the Knight’s Cross of the Iron Cross on 15 August 1940. Steiner was introduced to Heinrich Himmler, the head of the SS, to oversee the creation of, and then command the new SS Division Wiking. At the time of its creation, it consisted mostly of non-German volunteers (Dutch, Flemish, Finns and Scandinavians), including the Danish regiment Frikorps Danmark.

In April 1943, he was placed in command of a newly formed III SS Panzer Corps. The unit participated in anti-partisan actions in Yugoslavia. In November/December 1943 his corps was transferred to the Eastern Front and positioned in the northern sector at Leningrad under Army Group North. Steiner’s Panzer Corps played a leading role during the Battle of Narva and the Battle of Tannenberg Line. His unit then withdrew with the rest of Army Group North to the Courland Peninsula.

In January 1945, Steiner along with the III SS Panzer Corps was transferred by ship from the Courland Pocket to help with the defence of the German homeland. The corps was assigned to Army Group Vistula under the new Eleventh SS Panzer Army, although this army really only existed on paper. Once the Soviet Army reached the Oder river, the Eleventh SS Panzer Army became inactive and the III SS Panzer Corps was reassigned to the German Third Panzer Army as a reserve during the Soviets’ Berlin Offensive Operation. During the Battle of Halbe, the first major battle of the offensive, General Gotthard Heinrici, the commander of Army Group Vistula, transferred most of the III SS Panzer Corps’ divisions to General Theodor Busse‘s Ninth Army.

By 21 April, Soviet Marshal Zhukov’s 1st Belorussian Front had broken through the German lines on the Seelow Heights. Hitler, ignoring the facts, started to call the ragtag units that came under Steiner’s command Army Detachment Steiner (Armeeabteilung Steiner). An army detachment was something more than a corps but less than an army.

Hitler ordered Steiner to attack the northern flank of the huge salient created by the 1st Belorussian Front’s breakout. Steiner’s attack was due to coincide with General Busse’s Ninth Army, attacking from the south in a pincer attack. The Ninth Army had been pushed to south of the 1st Belorussian Front’s salient. To facilitate this attack, Steiner was assigned the three divisions of the Ninth Army’s CI Army Corps: the 4th SS Panzergrenadier Division Polizei, the 5th Jäger Division, and the 25th Panzergrenadier Division. All three divisions were north of the Finow Canal on the Northern flank of Zhukov’s salient. Weidling‘s LVI Panzer Corps, which was still east of Berlin with its northern flank just below Werneuchen, was also ordered to participate in the attack.

The three divisions from CI Army Corps planned to attack south from Eberswalde on the Finow Canal towards the LVI Panzer Corps. The three divisions from CI Army Corps were 24 kilometres (about 15 miles) east of Berlin and the attack to the south would cut the 1st Belorussian Front’s salient in two. Steiner called Heinrici and informed him that the plan could not be implemented because the 5th Jäger Division and the 25th Panzergrenadier Division were deployed defensively and could not be redeployed until the 2nd Naval Division arrived from the coast to relieve them. This left only two battalions of the 4th SS Panzergrenadier Division available and they had no combat weapons.

Based on Steiner’s assessment, Heinrici called Hans Krebs, Chief of Staff of the German General Staff of the Army High Command (Oberkommando des Heeres or OKH), and told him that the plan could not be implemented. Heinrici asked to speak to Hitler, but was told Hitler was too busy to take his call. On 22 April 1945, at his afternoon conference, Hitler became aware that Steiner was not going to attack and he fell into a tearful rage. The Fuhrer declared the war was lost, he blamed the generals and announced that he would stay on in Berlin until the end, then kill himself. On the same day, General Rudolf Holste was given what few mobile forces Steiner commanded so that he could participate in a new plan to relieve Berlin. Holste was to attack from the north while General Walther Wenck attacked from the west and General Theodor Busse attacked from the south. These attacks amounted to little and, on 25 April, the Soviet forces attacking to the north and to the south of Berlin linked up to the west of the city.

After the surrender, Steiner was incarcerated until 1948. He faced charges at the Nuremberg Trials, but they were dropped and he was released. Alongside with Paul Hausser, Herbert Gille and Otto Kumm, Steiner became a founding member of HIAG, the lobby group founded by former high-ranking Waffen-SS officers in West Germany in 1951. From his home in West Germany he published Die Freiwilligen der Waffen-SS: Idee und Opfergang; English: “The Volunteers of Waffen-SS: Idea and Sacrifice” in 1958. Steiner’s books and memoirs have been characterised by historian Charles Sydnor as one of the “most important works of apologist literature,” together with warfare analyses Grenadiere by Kurt Meyer and Waffen-SS in Action by Paul Hausser. These works demanded rehabilitation of the military branch of the NSDAP, with Steiner’s works being important in stressing the theme of the purely military Waffen-SS. A second book was published in 1963 under the title Die Armee der Geächteten (English: “The Army of the Outlaws”) and was equally tendentiously received. Steiner died on 12 May 1966, shortly before his 70th birthday. He never married.