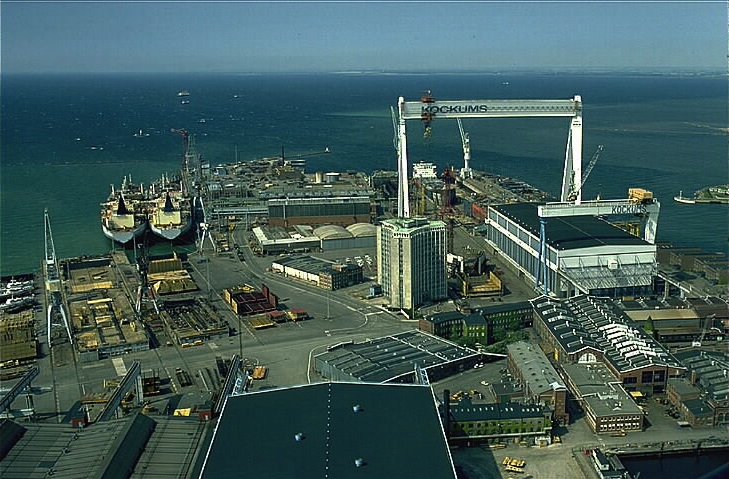 Kockums AB is a shipyard in Malmö, Sweden, owned by the Swedish defence company Saab Group. While having a history of civil vessel construction, Kockums’ most renowned activity is the fabrication of military corvettes and submarines.

Kockums worked with Northrop Grumman and Howaldtswerke-Deutsche Werft (HDW) to offer a Visby-class corvette derivative in the American Focused Mission Vessel Study, a precursor to the Littoral Combat Ship program. It competed with several other concepts, including Norway’s Skjold class (part of a Raytheon led group).

Prior to 1999, Kockums was controlled by the Swedish state through the company Svenska Varv AB. Having implemented a highly advanced variety of the Stirling engine for low noise submarine propulsion, Kockums was considered to have strategic value for the Swedish Navy. However, in 1999, Kockums’ main competitor on the submarine market, the German ship-building company HDW, acquired Kockums. In 2005, HDW was bought by the German industrial conglomerate Thyssen Krupp. The time after 1999 was beridden with conflicts between Kockum’s only Swedish customer, the Defence Materiel Administration (Sweden) (FMV), and Kockum’s German owners. The Swedish view was that the technical advancements made in collaboration between Kockums and FMV ought to be used to create a new generation of submarines for lucrative export: the A26 submarine. On the German side, the A26 project was said to be regarded as a high-risk project that could lead to uncontrollably growing costs. Superficially, the major source of conflict seemed to be that neither ThyssenKrupp nor FMV would accept carrying unforeseen development costs. As several technical innovations to be implemented in the A26 were kept in classified status at the FMV, ThyssenKrupp argued that the implied costs were too difficult to predict. This deadlock persisted for months until the FMV decided to cancel the order of the A26 submarines.

Globally, the conflict also concerned the general business strategy. ThyssenKrupp insisted that Kockums ought to discontinue large submarine construction and to focus on the development of small submarines. Meanwhile, anonymous sources from inside Kockums claimed that ThyssenKrupp’s goal in acquiring Kockums was never to reach synergies with HDW, but only to eliminate its main competitor.

When the Crimea crisis erupted in March 2014, Sweden’s defence interests in the future of Kockums came under closer scrutiny. The turning point was described by the chairman of the Swedish parliament’s Standing Committee on Defense (SCD), Peter Hultquist:

The wheels have turned. The government, possibly in response to Russia’s aggression in Crimea and the Ukraine, has decided that a strong industrial defense capacity that is Swedish-controlled will be the cornerstone that underpins defense policy and future capability.

In the search for a partner to develop the next generation of submarines, the FMV approached the SAAB Group. During autumn 2013, Saab tried to reach an agreement to buy Kockums from ThyssenKrupp. ThyssenKrupp demanded to keep its monopoly position in the A26 deal, which Saab refused to accept, causing the negotiations to fail. Saab responded by approaching Kockums’ engineers, offering them employment at Saab Naval Systems. Thyssen Krupp tried in vain to keep its engineers at Kockums, proposing an extra month’s salary.

The hositility towards ThyssenKrupp reached a new level during the Kockums equipment repossession incident on 8 April 2014. As per protocol, two military trucks accompanied by armed soldiers entered the Kockums shipyard in Malmö to reclaim all materiel and equipment belonging to the Defence Materiel Administration (Sweden), FMV, as well as all secret blueprints and images. By orders from a manager, Kockums staff tried to sabotage the repossession by locking the gates with the repossession crew and escort still inside. According to a spokesperson from FMV this is the first time they have had to forcefully repossess equipment.

Shortly after, ThyssenKrupp initiated discussions to sell Kockums to Saab. The deal was finalized on 22 July 2014, making Saab the new owner of Kockums.