Protesting #feesmust fall and #rhodesmustfall black students at South Africa’s University of Cape Town (UCT) have demanded that the discipline of science be completely scrapped because it is a product of white people.

“Science as a whole is a product of Western modernity and the whole thing should be scratched off. Especially in Africa‚” a black “student” was recorded as saying. 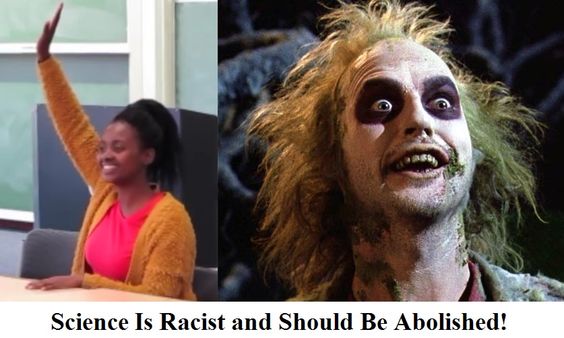 A report in the Business Times said that the incident happened during a panel discussion this week in which the “student” responded to a question about the decolonization of science.

“Science as a whole is a product of Western modernity and the whole thing should be scratched off. Especially in Africa‚” she said.

“I have a question for all the science people. There is a place in KwaZulu-Natal called Umhlab’uyalingana. They believe that through the magic‚ you call it black magic‚ they call it witchcraft‚ you are able to send lightning to strike someone. Can you explain that scientifically because it’s something that happens?”

Someone in the audience—sounding like a white student—shouted out “it’s not true,” and the majority black meeting then erupted into chaos.

The meeting chairman, a dreadlocked black woman, eventually restored order and forced the heckler to apologize to the speaker and agree to “abide by the terms of the meeting” or be thrown out.

The heckler apologized, and the original speaker then continued to explain why even Newton’s Law of Gravity is nonsense because it was invented by a white person:

“Western knowledge is totalizing,” the “student” said. “It is saying that it was Newton and only Newton who knew and saw an apple falling and out of nowhere decided gravity existed and created an equation and that is it.

“So if you are saying that you disagree with her approach [sic], it means that you are vested in the Western and Eurocentric way of understanding, which means you yourself still need to go back and internally decolonize your mind, come back and say how can I relook at what I have been studying all these years, because Western knowledge is very pathetic to say the least.

“I from a decolonized perspective that we can do more as new knowledge producers as people who are given the benefits to reason, whatever, people say we do or thing when we rationalize, [sic] so decolonizing the science would mean doing away with it entirely and starting all over again to deal with how we respond to the environment and how we understand it.”