Thousands of German children — many of them toddlers fleeing the Soviet advance — died in Danish refugee camps at the end of World War II. A crusading doctor has set out to document their suffering and break long-standing beliefs about post-war Danish humanity.

Their names were Heinrich, Helmut and Walter, Gudrun, Karin or Ingelore. Hundreds of them lie buried in the farthest corners of Copenhagen’s largest cemetery, Vestre Kirkegaard. Hardly any local mourners ever see them.

Plain crosses or stone slabs bear their names and mark graves in which as many as twelve small corpses were hastily buried. Sometimes they are only partially identified, like “Kottmann Child 7.4.45” or “unknown refugee child,” written in now-weathered writing.

The birth dates and death dates have been recorded for most of them, but the death registers contain few other details. Still, the silent numbers nonetheless hint at their tragic fates. Like what happened to Adelheid Wandke.

Out of danger, into suffering

Little Adelheid, was not yet two when the Red Army began battling for Berlin and the US Armed Forces reached the Elbe River in Magdeburg. Adelheid was one of the lucky ones. She escaped just in time — boarded onto one of the last refugee boats crossing the Baltic Sea, headed for the seemingly peaceful country of Denmark. For her, the danger seemed to be over.

Unfortunately, Adelheid never saw the end of the war. She also never saw her second birthday. On April 21, 1945, Adelheid was dead. Eighteen-month-old Lissy Engel was no more fortunate: 46 days after the surrender of the Germans in Denmark, on May 5th, she, too, was dead.

Adelheid, Lissy and the others are, according to a plaque on their graves, among the last German “victims of World War II.” There were many more and Copenhagen is not the only supposedly safe Danish city where they were laid to rest.

Some ten thousand German children under five died in Danish camps after liberation even though they — and their families, if they had any — seemed to be in safety.

Kirsten Lylloff, 64, a Danish physician and historian, has just written the previously untold story of these unfortunate and forgotten children. She calls their deaths “the biggest humanitarian catastrophe in modern Denmark.” Joergen Poulsen, director of the Red Cross, speaks of a “dark chapter” in Danish history, a chapter “we will always have to be ashamed of.”

Lylloff’s courageous documentation does much to debunk Danish myths about the nation’s humanity during World War II. In documenting the suffering of what she calls the “tyske flygtningebørn,” she has opened debate on just how willing Danish doctors — and the local population — were to help German refugees. The answers, less positive than most Danes would like to believe, have created an emotional swelling in Denmark and have forced Danes — 60 years later — to come to terms with the truth about their past.

In the final weeks of the war, between February 11 and May 5, about 250,000 German refugees fled across the Baltic Sea to escape the sinking German Reich. Most were from East Prussia, Pomerania and the Baltic provinces and were fleeing the Soviet Army. And most were women, children or elderly. A third of the refugees were younger than 15 years old.

When they landed, they found themselves stranded in putative freedom and at the start of a new martyrdom. The refugees were interned in hundreds of camps from Copenhagen to Jutland, placed behind barbed wire and guarded by heavily armed overseers. The largest camp was located in Oksboll, on the west coast of Jutland, and had 37,000 detainees.

Nutrition was terrible, medical care was miserable. In 1945 alone, more than 13,000 people died, among them some 7,000 children under five. According to Lylloff’s research, more German refugees died in Danish camps, “than Danes did during the entire war.” Lylloff, a long-time senior physician and department head of immunology in Hilerod near Copenhagen, examined 6,200 death certificates and 6,500 grave stones. The result: A dissertation (“Children or enemies?”) and a crushing verdict on members of her own profession: “What kind of monsters masquerading as human beings were those Danish doctors of 1945?” she asks.

Lylloff discovered that the Danish Association of Doctors had decided in March 1945 that German refugees would not receive any medical care. That same month the Red Cross refused to take any action, according to the newspaper “Politiken,” because public sentiment was “against the Germans.” The result: 80% of the small children that landed on Denmark’s shores did not survive the following months.

They either starved or were unable to fight infections due to extreme malnutrition. Detailed medical reports don’t exist. All that’s left are endless rows of sad grey grave stones.

Lylloff’s research is not disputed, but the reasons for what happened are being debated vehemently. Was it Danish “hatred” of everything German as a reaction to the oppressive Nazi occupying forces, as Lylloff believes? Or was it an attempt to wipe away memories of their own collaboration? “We had enough to do, taking care of ourselves,” explains Arne Gammelgaard, a historian of the older generation, in order to excuse the negligent treatment. His view is shared by many. 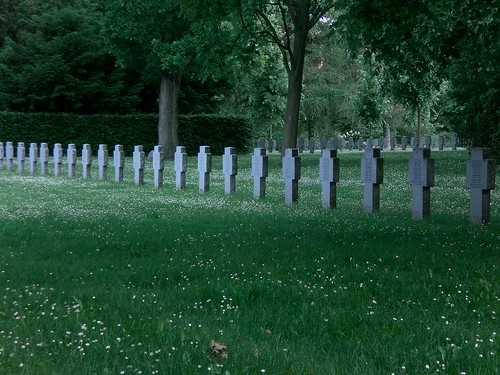