German soldiers being welcomed by danes, at Tønder.

“On 9. april 1940 from early morning 4.15 until midday Denmark was invaded by Nazi German Army, Marine and Air Force. The German Government gave the Danish Government an ultimatum of total surrender – if not the German Air Force would destroy the capital of Copenhagen by bombing.

At 7 a.m. the german marines landed on Langelinie quai in Copenhagen with thousands of soldiers and occupied the Fortress Kastellet. Thousands of german soldiers invaded Jutland and were fighting with danish soldiers until 8 a.m.  – 17 danish soldiers died in the fightings.

Before midday Ålborg Military Airbase i Jutland was bombarded and invaded by the German Airforce.

Denmark had within 6 hours been occupied of a huge german military power created by a nazi regime from 1933-40 with a population of more than 60 millions against a danish population of 5 millions – it was a elefant against a mouse!

It was a humiliation of the danish national pride of not defending their nation, as they have done in the passed 1000 years!”

“From 9. april 1940 to 29. august 1943 the Danish Government and Parliament “Folketinget” reigned Denmark in co-operation with the German Government i Berlin through a german political coordinator Renthe-Fink (1940-42) and Werner Best (1942-45) and the high commander of the German Military in Denmark general von Hanneken.”

“One of the reasons by the double attack by Nazi-Germany on Denmark and Norway on the same day 9. april 1940 was to protect Germany from an British/USA invasion and later attack from Scandinavia – from northern Europe. The Nazi Germany wanted to get the supreme military power by submarines in the Northern Atlantic Ocean between Denmark, Norway in the east and Greenland, Iceland, Svalbard and the Faerø Islands in the west.

Thats why England invaded the Faerø Islands in the Atlantic Ocean the 12. april 1940. On 9. april 1941 USA signed a treaty with Danish ambassador in Washington Henrik Kaufmann by a secret permission of the danish King Christian 10 (Hull-Kauffmann) agreement.  This treaty “Grønlandstraktaten” allowed U.S.A. to build 14 naval bases, airfields, meteorological- and radiostations in north-, west- and south Greenland: Bluie West 1-9  on the west coast and Bluie East 1-5 on the east coast of Greenland. In 1942-43 the american military builded Narsarsuaq Air Field and Naval Support Base Grondal, Bluie West Seven (Flådestation Grønnedal) close to Ivigtuut Cryolite mine in South Greenland and in Iceland Keflavik Airfield to protect the allied ship traffic between Europe and United States against nazi germans submarines attacks in North Atlantic Ocean. American military personal on american military installations in Greenland 1941-45: in average 5.500 men and woman.

The 10. may 1940 Nazi-Germany attacked Holland, Belgium, Luxembourg and France an a “Blizkrieg”. Holland og Belgium surrended and exil governments were established i London, England. On 22. june 1940 France surrounded to Nazi Germany and was divided in German occupied zone north/west and a german friendly zone in south/west of France and governed by marchal Pétain (Vichy-government).

From july 1940 the fascist government in Italy led by Benito Mussulini (Partito Nazionale Fascsita (PNF) joined actively in the War as a military partner with Nazi-Germany. The fascist and totalitarian  governments in Spain (General Franco) and Portugal (Salazar) supported Nazi Germany politically and military.” 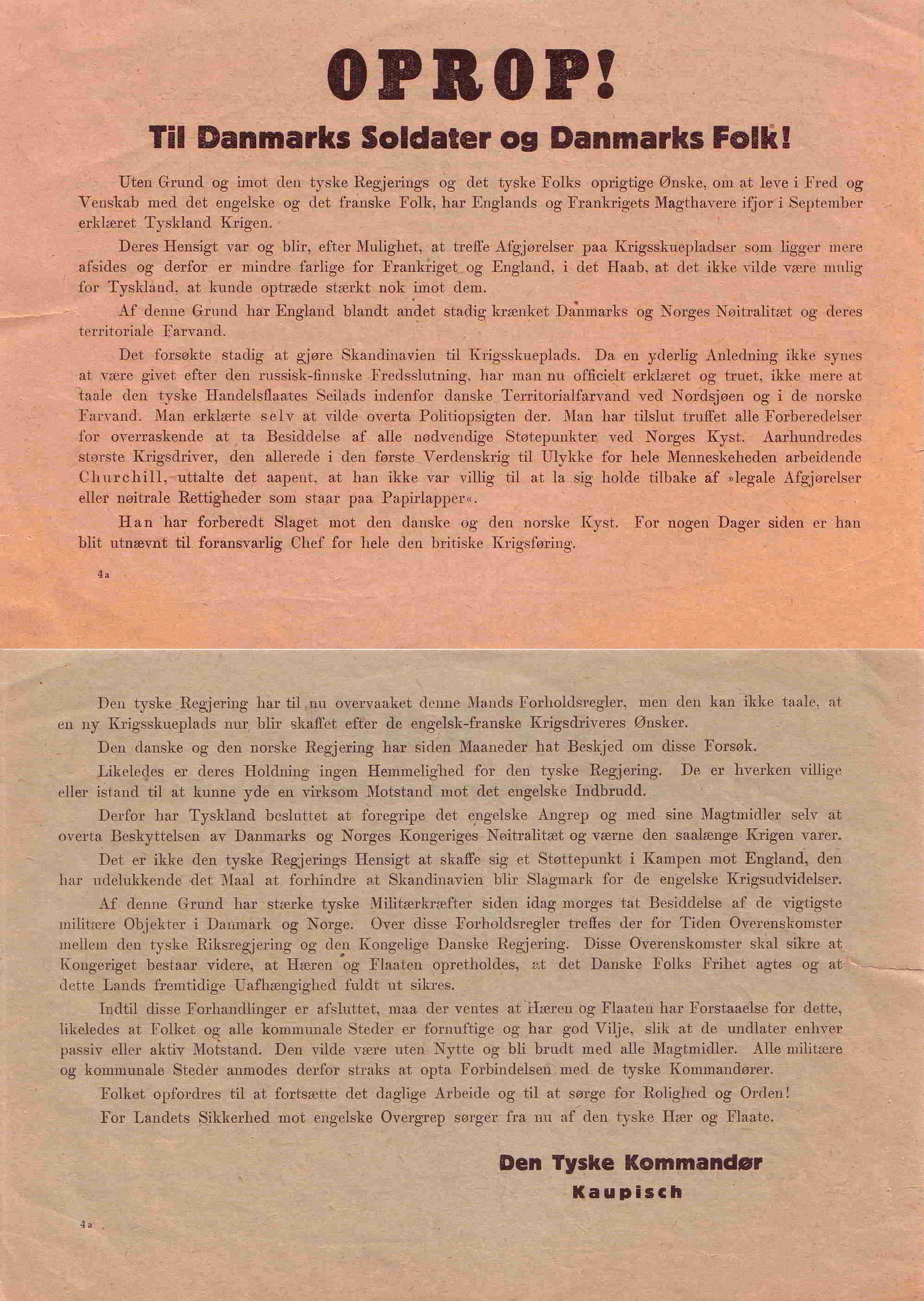 OPROP! (Opraab! in correct 1940-Danish; proclamation) was a German leaflet dropped over several Danish cities at the German invasion of Denmark on April 9, 1940. The leaflets were signed by the head of Operation Weserübung Süd, General Leonhard Kaupisch. The text, written in very broken but understandable Danish mixed with Norwegian, justified the German invasion as fraternally protecting Danish and Norwegian neutrality against British aggression, denounced Winston Churchill as a warmongerer, and exhorted the Danish populace not to resist the German presence while an arrangement with the Danish government was being negotiated.

The OPROP! leaflet had a notable impact in regards to the Danish capitulation. When the German infantry arrived at the Amalienborg Palace in the morning of April 9, 1940, they were met with determined opposition from the King’s Royal Guard, which repulsed back the initial attack, suffering three wounded. This gave Christian X and his ministers time to confer with the Danish Army chief General William Wain Prior. As the discussions were ongoing, several formations of Heinkel He 111 and Dornier 17 bombers roared over the city dropping the OPROP! leaflets. Faced with the explicit threat of the Luftwaffe bombing the civilian population of Copenhagen, and only General Prior in favour of continuing the fighting, the Danish government capitulated in exchange for retaining political independence in domestic matters.

In 2016 historian Hans Christian Bjerg argued that the poor broken Danish on the leaflet could be because it was a rushed translation of a similar leaflet written by the Germans for use over Norway the same day. The reason would be that Operation Weserübung initially called for invasion only of Norway and that the additional invasion of Denmark was decided at a late stage in the planning.

The germans made a few bullet holes in general Priors car.

German soldiers being welcomed by danes, at Aabenraa.

A bombed out danish airplane at Værløselejren near Copenhagen.