Colditz Castle (or Schloss Colditz in German) is a Renaissance castle in the town of Colditz near Leipzig, Dresden and Chemnitz in the state of Saxony in Germany. It gained international fame as Oflag IV-C, a prisoner-of-war camp during World War II for “incorrigible” Allied officers who had repeatedly escaped from other camps.

The castle lies between the towns of Hartha and Grimma on a hill spur over the Zwickauer Mulde. It had the first wildlife park in Germany when, in 1523, the castle park was turned into one of the largest zoos in Europe.

In 1046, Henry III of the Holy Roman Empire gave the burghers of Colditz permission to build the first documented settlement at the site. In 1083, Henry IV urged Margrave Wiprecht of Groitzsch to develop the castle site, which Colditz accepted. In 1158, Emperor Frederick Barbarossa made Thimo I “Lord of Colditz”, and major building works began. By 1200, the town around the market was established. Forests, empty meadows, and farmland were settled next to the pre-existing Slavic villages Zschetzsch, Zschadraß, Zollwitz, Terpitzsch and Koltzschen. Around that time the larger villages Hohnbach, Thierbaum, Ebersbach and Tautenhain also emerged.

In the Middle Ages, the castle played an important role as a lookout post for the German Emperors and was the centre of the Reich territories of the Pleißenland (anti-Meißen Pleiße-lands). In 1404, the nearly 250-year rule of the dynasty of the Lords of Colditz ended when Thimo VIII sold Colditz Castle for 15,000 silver marks to the Wettin ruler of the period in Saxony.

As a result of family dynastic politics, the town of Colditz was incorporated into the Margraviate of Meissen. In 1430, the Hussites attacked Colditz and set town and castle on fire. Around 1464, renovation and new building work on the castle were carried out by Prince Ernest, who died in Colditz Castle in 1486. Under Frederick the Wise and John the Gentle, Colditz was a royal residence of the electors of Saxony.

In 1504, the servant Clemens the baker accidentally set Colditz on fire, and the town hall, church, castle and a large part of the town went up in flames. In 1506, reconstruction began and new buildings were erected around the rear castle courtyard. In 1523, the castle park was turned into one of the largest zoos in Europe. In 1524, rebuilding of the upper floors of the castle began. The castle was reconstructed in a fashion that corresponded to the way it was divided up—into the cellar, the royal house and the banqueting hall building. There is nothing more to be seen of the original fortified castle, where the present rear of the castle is located, but it is still possible to make out where the original divisions were (the Old or Lower House, the Upper House and the Great House).

The structure of the castle was changed during the long reign of the Elector Augustus of Saxony (1553–86), and the complex was reconstructed into a Renaissance style castle from 1577 to 1591, including the portions that were still in the gothic architectural style. Architects Hans Irmisch (de) and Peter Kummer supervised further restoration and rebuilding. Later, Lucas Cranach the Younger was commissioned as an artist in the castle.

During this period the portal at what is known as the church house was created in 1584, made of Rochlitz Porphyr (rhyolite tuff) and richly decorated in the mannerist style by Andreas Walther II. This dimension stone has been in use in architecture for over 1,000 years. It was at this time that both the interior and the exterior of “the Holy Trinity” castle chapel that links the cellar and electors’ house with one another were redesigned. Shortly thereafter the castle became an administrative centre for the Office of Colditz and a hunting lodge. In 1694, its then-current holder, Augustus the Strong, began to expand it, resulting in a second courtyard and a total of 700 rooms.

In the 19th century, the church space was rebuilt in the neo-classic architectural style, but its condition was allowed to deteriorate. The castle was used by Frederick Augustus III, Elector of Saxony as a workhouse to feed the poor, the ill, and persons under arrest. It served this purpose from 1803 to 1829, when its workhouse function was taken over by an institution in Zwickau. In 1829, the castle became a mental hospital for the “incurably insane” from Waldheim. In 1864, a new hospital building was erected in the Gothic Revival style, on the ground where the stables and working quarters had been previously located. It remained a mental institution until 1924.

For nearly 100 years, from 1829 to 1924, Colditz was a sanatorium, generally reserved for the wealthy and the nobility of Germany. The castle thus functioned as a hospital during a long period of massive upheaval in Germany, from slightly after the Napoleonic Wars destroyed the Holy Roman Empire and created the German Confederation, throughout the lifespan of the North German Confederation, the complete reign of the German Empire, throughout the First World War, and until the beginnings of the Weimar Republic. Between 1914 and 1918, the castle was home to both psychiatric and tuberculosis patients, 912 of whom died of malnutrition. The castle was home to several notable figures during its time as a mental institution, including Ludwig Schumann, the second youngest son of the famous composer Robert Schumann and Ernst Baumgarten (de), one of the original inventors of the airship.

When the Nazis came to power in 1933, they turned the castle into a political prison for communists, homosexuals, Jews and other people they considered undesirable. Starting in 1939, allied prisoners were housed there. The larger outer court, known as the Kommandantur, had only two exits and housed a large German garrison. The prisoners lived in an adjacent courtyard in a 90 ft (27 m) tall building. Outside, the flat terraces which surrounded the prisoners’ accommodation were constantly watched by armed sentries and surrounded by barbed wire. Although known as Colditz Castle to the locals, its official German designation was Oflag IV-C and it was under Wehrmacht control.

Although it was considered a high security prison, it had one of the highest records of successful escape attempts. This could be owing to the general nature of the prisoners that were sent there; most of them had attempted escape previously from other prisons and were transferred to Colditz, because the Germans had thought the castle escape-proof.

One lavish scheme even included a glider, the “Colditz Cock“, that was kept in a remote portion of the castle’s attic, completed in the winter of 1944–45, but following the Great Escape, in which 50 escapees were executed, all further escape attempts were officially discouraged and the glider was never used. When the camp was liberated by the Americans in late April, 1945 the glider was brought down from the hidden workshop to the attic below and assembled for the prisoners to see. It was at this time that the only known photograph of the glider was taken. For some time after the war the glider was regarded as either a myth or tall story, as there was no solid proof that the glider had existed and Colditz was then in the Soviet Occupation Zone. Bill Goldfinch, however, took home the drawings he had made when designing the glider and, when the single photograph finally surfaced, the story was taken seriously.

In 1999, a full-sized replica of the Colditz Cock was commissioned by Channel 4 Television in the UK and was built by Southdown aviation Ltd. at Lasham Airfield, closely following Goldfinch’s drawings. Watched by several of the former prisoners of war who worked on the original, it was test flown at RAF Odiham in 2000. The escape plan could have worked.

Captain Patrick R. Reid, who successfully escaped from Colditz in 1942, wrote two detailed books about the living conditions and various escape attempts at Colditz from 1940 to 1945: The Colditz Story and The Latter Days at Colditz. In the early 1970s, these were made into a BBC television series starring David McCallum, Edward Hardwicke and Robert Wagner.

In April 1945, U.S. troops entered Colditz town and, after a two-day fight, captured the castle on 16 April. In May 1945, the Soviet occupation of Colditz began. According to the agreement at the Yalta Conference it became a part of East Germany. The Soviets turned Colditz Castle into a prison camp for local burglars and non-communists. Later, the castle was a home for the aged and nursing home, as well as a hospital and psychiatric clinic. For many years after the war, forgotten hiding places and tunnels were found by repairmen, including a radio room set up by the French POWs, which was then “lost” again only to be re-discovered some twenty years later. 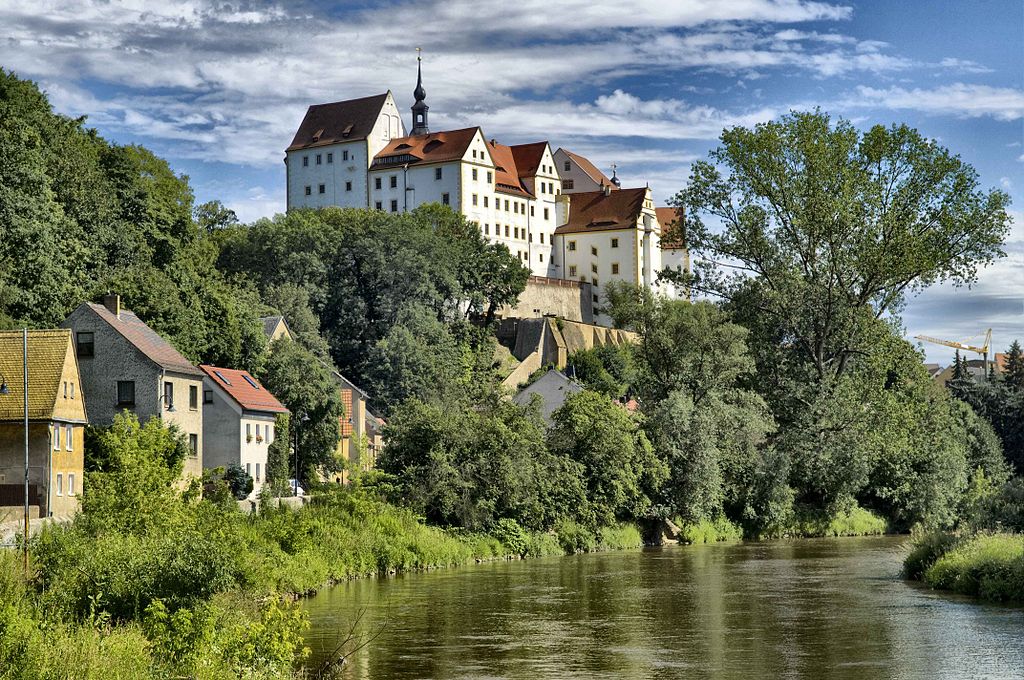 During 2006 and 2007, the castle underwent a significant amount of refurbishment and restoration which was paid for by the state of Saxony. The castle walls were repainted to reflect the look of the castle prior to World War II.

With renovations largely completed, the castle now includes both a museum and guided tours showing some of the escape tunnels built by prisoners of the Oflag during the war. The chapel has recently completed a very impressive restoration to its prewar decoration, where glass panels have been inserted to the flag stone flooring revealing the escape tunnel dug by French escapees.

The outer courtyard and former German Kommandantur (guard quarters) have been converted into a youth hostel / hotel and the Gesellschaft Schloss Colditz e.V. (the Colditz Castle historical society), founded in 1996, has its offices in a portion of the administration building in the front castle court.