Lichtenstein Castle (German: Schloss Lichtenstein), also known as the “Fairy tale castle of Württemberg“, is an 1840s Biedermeier-style Gothic Revival castle built on a large rock situated in the Swabian Jura and overlooking the Echaz valley near Honau, Reutlingen in the Tübingen region of Baden-Württemberg, Germany. Though a few prior structures have stood on this spot, the current edifice was built between 1840 and 1842.

The castle is located on the Albtrauf of the Swabian Jura in the Reutlingen district at an altitude of 817 metres (2,680 feet) above sea level and about 250 metres (820 feet) above the Echaz river, a small tributary of the Neckar river. The ruins of Schloss Lichtenstein’s medieval predecessor, Burg Alt-Lichtenstein (English: Old Lichtenstein castle), lie 500 metres (1,600 feet) away. 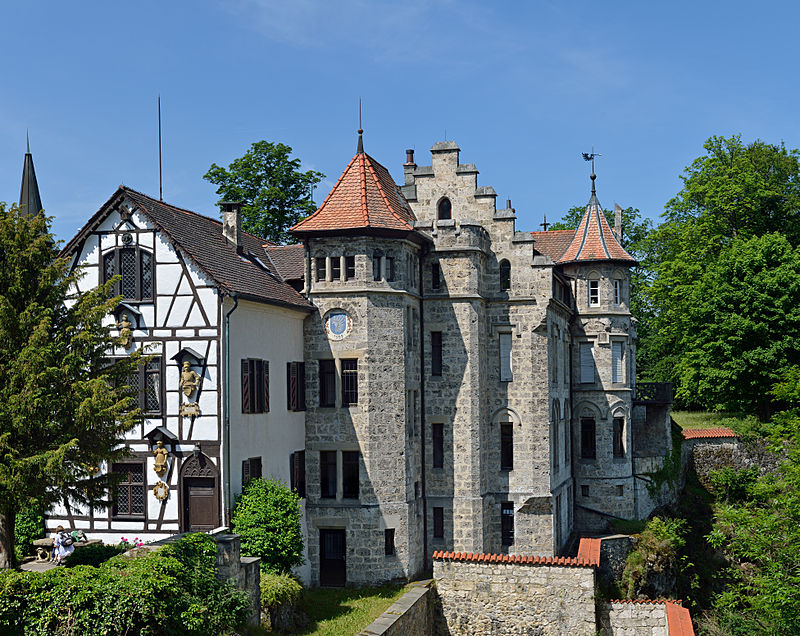 The castle was damaged during World War II, but efforts to restore the castle began in the immediate aftermath of the war. Once again, and thanks to local non-profit organizations like the Wüstenrot Foundation and Community Fund for the Preservation of Lichtenstein Castle, the walls were restored in 1980, followed by the second floor in 1998. The upper floor and roof were restored in 2002.

Still owned by the Dukes of Urach, the castle is open to the public via guided tour, although some rooms may not be entered. The courtyard is open to the general public, allowing the gun emplacements on the walls to be viewed.