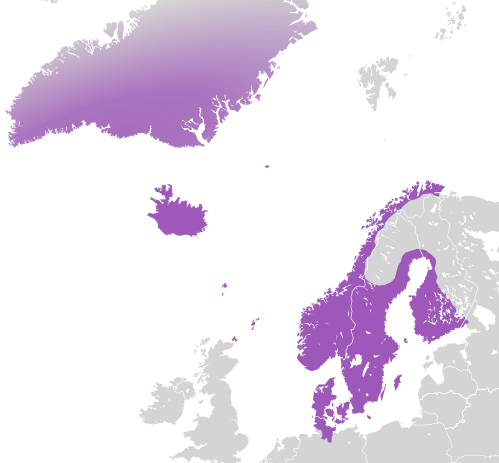 The Kalmar Union or Union of Kalmaris (Danish, Norwegian and Swedish: Kalmarunionen; Latin: Unio Calmariensis) was a personal union that from 1397 to 1523 joined under a single monarch the three kingdoms of Denmark, Sweden (then including Finland), and Norway, together with Norway’s overseas dependencies (then including Iceland, Greenland, the Faroe Islands and the Northern Isles). The Union was not quite continuous; there were several short interruptions. Legally the countries remained separate sovereign states, but with their domestic and foreign policies being directed by a common monarch.

One main impetus for its formation was to block German expansion northward into the Baltic region. The main reason for its failure to survive was the perpetual struggle between the monarch, who wanted a strong unified state, and the Swedish and Danish nobility which did not. Diverging interests (especially the Swedish nobility‘s dissatisfaction with the dominant role played by Denmark and Holstein) gave rise to a conflict that would hamper the union in several intervals from the 1430s until its definitive breakup in 1523 when Gustav Vasa became king of Sweden.

Norway continued to remain a part of the realm of Denmark–Norway under the Oldenburg dynasty for nearly three centuries until its dissolution in 1814. Then Union between Sweden and Norway lasted until 1905, when a grandson of the incumbent king of Denmark was elected its king, whose direct descendants still reign in Norway.

Flag of the Kalmar Union 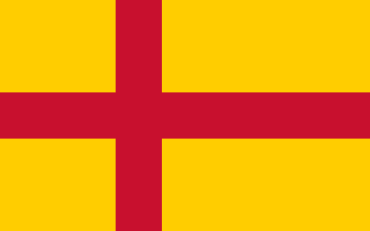 The union was the work of Scandinavian aristocracy wishing to counter the influence of the Hanseatic League. Margaret (1353–1412), a daughter of King Valdemar IV of Denmark, married King Haakon VI of Norway and Sweden, who was the son of King Magnus IV of Sweden, Norway and Scania. Margaret succeeded in having her son Olav recognized as heir to the throne of Denmark. In 1376 Olav inherited the crown of Denmark from his maternal grandfather as King Oluf III, with his mother as guardian; when Haakon VI died in 1380, Olaf also inherited the crown of Norway. The two kingdoms were united in a personal union under a child king, with the king’s mother as his guardian; later, Olav had designs on the throne of Sweden (in opposition to Albert of Mecklenburg) from 1385 until 1387. 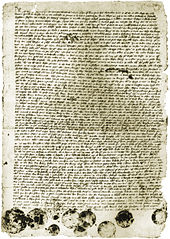 The Letter of Union from July 1397. It never properly entered into force.

Olav died in 1387, before he came of age and could take over the government, so Margaret made the Danish Council of the Realm elect her as regent of Denmark, but she did not attempt to assume the title of queen. On 2 February the next year (1388), she was also recognized as regent of Norway. She adopted her sister’s grandson Bogislav, a son of Prince Vartislav of Pomerania, and gave him the more Nordic name Erik, and manoeuvred to have the Norwegian Council recognize him as heir to the throne of Norway, in spite of his not being first in the line of succession, and he was installed as king of Norway in 1389, still with Margaret as his guardian. In Sweden, this was a time of conflict between King Albert of Mecklenburg and leaders of the nobility; Albert’s enemies in 1388 elected Margaret as regent in the parts of Sweden that they controlled, and promised to assist her in conquering the rest of the country. Their common enemy was the Hanseatic League and the growing German influence over the Scandinavian economy. After Danish and Swedish troops in 1389 defeated the Swedish king, Albert of Mecklenburg, and he subsequently failed to pay the required tribute of 60,000 silver marks within three years after his release, her position in Sweden was secured. The three Nordic kingdoms were united under a common regent, and Margaret promised to protect the political influence and privileges of the nobility under the union; her grandnephew Erik, already king of Norway since 1389, succeeded to the thrones of Denmark and Sweden in 1396.

The Nordic union was established on 17 June 1397 by the Treaty of Kalmar, signed in the Swedish castle of Kalmar on Sweden’s south-east coast, which in medieval times was close to the Danish border. The treaty stipulated an eternal union of the three realms under one king, who was to be chosen among the sons of the deceased king; they were to be governed separately, together with the respective councils, and according to their ancient laws, but foreign policy was to be conducted by the king. It has been doubted[by whom?] that several of the signatories were present (for example, the entire Norwegian “delegation”), and it has been argued[by whom?] that the Treaty was only a draft document; it appears[according to whom?] that the treaty was never ratified by “constitutional” bodies of the three kingdoms.

The short-term effects of the treaty were achieved anyway, independently of whether the treaty was binding or not, because the stipulations as to day-to-day governmental operations were mostly matters which were in the power of the king to decide; moreover, until Eric was deposed in the late 1430s, he made decisions as to each of the kingdoms in accordance with the treaty intentions. Long-term stipulations, such as what should happen when the monarch ceases to reign and a new monarch succeeds, were not among those achieved without problems, as subsequent events show during the next 130 years. At each junction, installation of a new monarch tended to mean a break-up of the union for a while. Eric of Pomerania, however, became the monarch of all three kingdoms. At Kalmar, the 15-year-old Eric of Pomerania was crowned king of all three kingdoms by the archbishops of Denmark and Sweden, but Margaret managed to remain in control until her death in 1412.

The Swedes were not happy with the Danes’ frequent wars on Schleswig, Holstein, Mecklenburg, and Pomerania, which were a disturbance to Swedish exports (notably iron) to the European continent. Furthermore, the centralization of government in Denmark raised suspicions. The Swedish Privy Council wanted to retain a fair degree of self-government. The unity of the union eroded after the Danish defeat against the German Hanseatic League in the 1430s, even to the point of armed rebellion (the Engelbrecht rebellion), leading to the expulsion of Danish forces from Sweden. Erik was deposed (1438–39) as the union king and was succeeded by his nephew, the childless Christopher of Bavaria. In the power vacuum that arose following Christopher’s death (1448), Sweden elected Charles VIII king with the intent to reestablish the union under a Swedish king. Charles was elected king of Norway in the following year, but the counts of Holstein were more influential than the Swedes and the Norwegians together, and made the Danish Privy Council appoint Christian I of Oldenburg as king. During the next seven decades struggle for power and the wars between Sweden and Denmark would dominate the union.

After the briefly successful reconquest of Sweden by Christian II and the subsequent Stockholm bloodbath in 1520, the Swedes rose in another rebellion which ousted the Danish forces again in 1521, though Stockholm did not surrender until the summer of 1523. While independence was being reclaimed, the election of King Gustav of the Vasa at Strängnäs on 6 June 1523, has been seen as a declaration of independence, and as the de facto end of a union that had lost all long-term support in Sweden. On that date Gustav Vasa was hailed as king, though he was not crowned until 1528. In 1983, June 6 became the National Day of Sweden.

One of the last structures of the Kalmar Union, or, rather, medieval separateness, remained until 1536 when the Danish Privy Council, in the aftermath of a civil war, unilaterally declared Norway to be a Danish province, without consulting their Norwegian colleagues.

Although the Norwegian council never recognized the declaration formally, and Norway kept some separate institutions and its legal system, this had the practical effect that the Norwegian possessions of Iceland, Greenland and the Faroe Islands came under direct control of the crown. In principle this meant that the Norwegian crown, under the Danish union (the monarch lived in Denmark), was henceforth controlled from Denmark and not from Norway.

In the 1814 Treaty of Kiel, the king of Denmark–Norway was forced to cede mainland Norway to the King of Sweden, Charles XIII. Norway, led by the viceroy Prince Christian Frederick, objected to the terms of the treaty. A constitutional assembly declared Norwegian independence, adopted a liberal constitution, and elected Christian Frederick king. After a brief war with Sweden the peace terms of the Convention of Moss recognized Norwegian independence, but forced Norway to accept a personal union with Sweden.

In the middle of the 19th century, many intellectuals joined the Scandinavist movement, which promoted closer contacts between the three countries. At the time, the union between Sweden and Norway under one monarch, together with the fact that King Frederick VII of Denmark had no male heir, gave rise to the idea of reuniting the countries of the Kalmar Union, except for Finland, which was annexed by the Russian Empire in 1809-1917.

In 1953–1955 the former territories of the Kalmar Union, Denmark (with Greenland and the Faroes), Finland (with Åland), Iceland, Norway, and Sweden, formed the Nordic Council, a discussion forum for members of the parliaments. In addition, two important treaties were agreed in 1955. First, the Nordic countries were formed as a passport-free zone which was somewhat similar to modern day Schengen treaty. Also, citizens of the Nordic countries were allowed to live and work in any member state without limitation. These treaties still exist but their importance has waned due to the EU/EEA and Schengen. The background for the treaties was Sweden’s need of labour for her fast-growing industry in the 1950s.

Denmark with Copenhagen as the capital of the North.

Perhaps Eric’s most far-ranging act was the introduction of the Sound Dues (Øresundtolden) in 1429, which was to last until 1857. By this he secured a large stable income for his kingdom that made it relatively rich and which made the town of Elsinore flowering. It showed his interest in Danish trade and naval power, but also permanently challenged the other Baltic powers, especially the Hanseatic cities against which he also fought. From 1426 to 1435 Eric was at war with the German Hanseatic League and Holstein. Another important event was his making Copenhagen a royal possession in 1417, thereby assuring its status as the capital of Denmark. However, when the Hanseats and Holsteiners attacked Copenhagen in 1428 Eric left the city and his wife, Queen Philippa managed the defence of the capital.