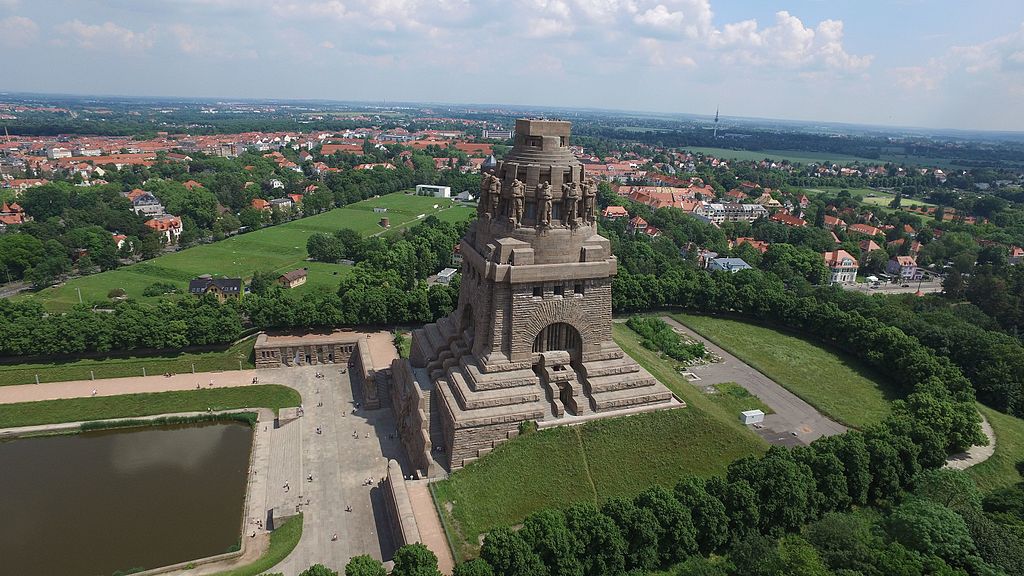 The monument commemorates Napoleon’s defeat at Leipzig, a crucial step towards the end of hostilities in the War of the Sixth Coalition, which was seen as a victory for the German people, although Germany as it is known today did not begin to exist until 1870. There were German speakers fighting on both sides, as Napoleon‘s troops also included conscripted Germans from the French-occupied left bank of the Rhine as well as from the Confederation of the Rhine.

The structure is 91 metres (299 ft) tall. It contains over 500 steps to a viewing platform at the top, from which there are spectacular views across the city and environs. The structure makes extensive use of concrete, although the facings are of granite. The monument is widely regarded as one of the best examples of Wilhelmine architecture. It is said to stand on the spot of some of the bloodiest fighting, from where Napoleon ordered the retreat of his army 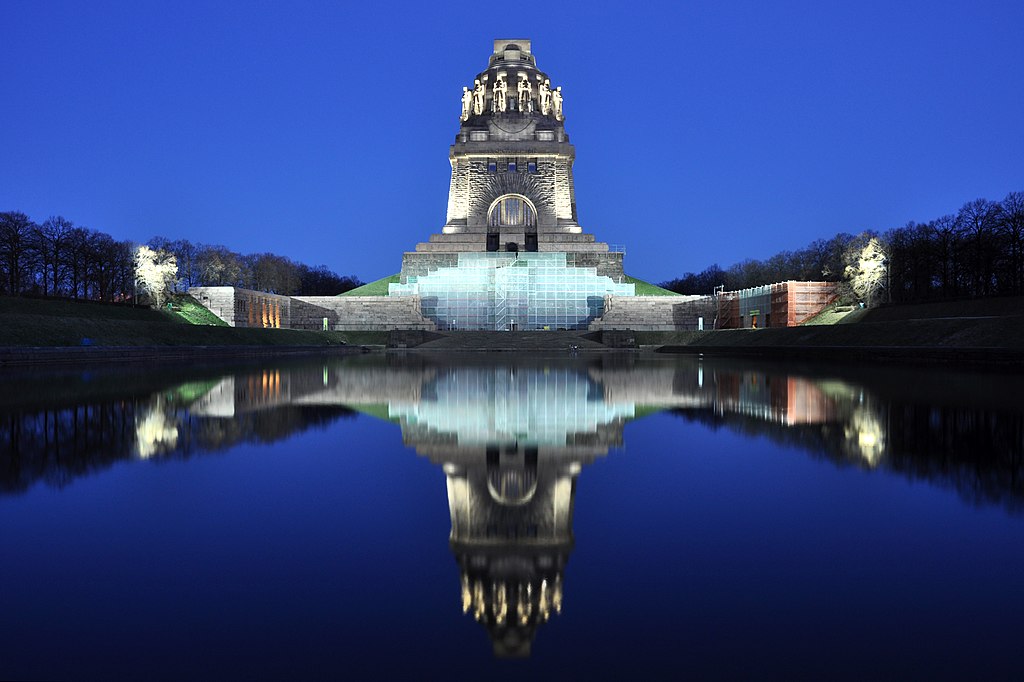 Between 16–19 October 1813, the Battle of the Nations was fought by the coalition armies of Russia, Prussia, Austria, and Sweden against the French army of Napoleon aided by Polish and Italian troops as well as German-speakers from the Confederation of the Rhine. Napoleon’s army was defeated and compelled to return to France while the Allies invaded France early the next year. Napoleon was forced to abdicate and was exiled to Elba in May 1814.

In 1814 proposals to build a monument to commemorate the battle were made. Among the supporters of the project, author Ernst Moritz Arndt called for the construction of “a large and magnificent (monument), like a colossus, a pyramid, or the cathedral of Cologne“. Architect Friedrich Weinbrenner created a design for the monument that ultimately was not used. 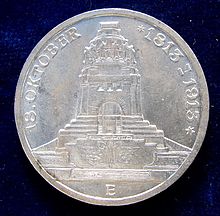 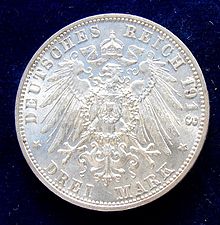 In 1863, commemorating the 50th anniversary of the battle, a foundation stone was placed, but the memorial was not built. Clemens Thieme, a member of the Verein für die Geschichte Leipzigs (Association for the History of Leipzig) learned during a meeting of the association about the past plans to build a monument. Interested in resuming the project, Thieme, who was also a member of the Apollo masonic lodge, proposed the project during a meeting and gained the support of his fellow masons. In 1894, he founded the Deutsche Patriotenbund (Association of German Patriots) which raised, by means of donations and a lottery, the funds necessary to construct the monument for the 100th anniversary . The following year, the city of Leipzig donated a 40,000-square-metre (9.9-acre) site for the construction. The project was commissioned to Bruno Schmitz, due to his previous works at the Kyffhäuser. The construction began in 1898. The chosen construction site was the spot where Napoleon ordered the retreat of his army. Thieme financed part of the construction as well, and for his complete dedication to the project, he was named an Honorary Citizen of Leipzig. Inspired by Weinbrenner’s early project, Schmitz constructed the monument over an artificial hill, and selected a pyramidal shape for a clear view of the surroundings. The base is 124 metres (407 ft) square. The main structure, at 91 metres (299 ft), is one of the tallest monuments in Europe. It is composed of two storeys. On the first story, a crypt is adorned by eight large statues of fallen warriors, each one next to smaller statues called the Totenwächter (Guardians of the Dead). On the second story, the Ruhmeshalle (Hall of Fame) features four statues, each 9.5 metres (31 ft) tall, representing the four legendary historic qualities ascribed to the German people: bravery, faith, sacrifice, and fertility. The statues of the monument were sculpted by Christian Behrens and his apprentice Franz Metzner, who finished the remaining statues after Behrens’s death in 1905. Metzner worked on the sculptures at the top and inside the memorial 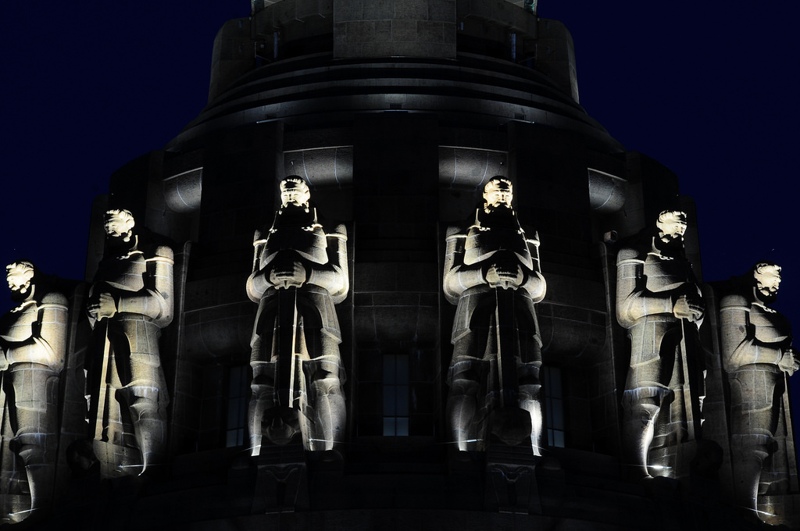 The memorial is constructed in granite and sandstone. The cupola is decorated with primitive Germanic shapes, inspired by Egyptian and Assyrian sculpture. Schmitz also planned to create an accompanying complex for ceremonies that would include a court, a stadium and parade grounds. However, only a reflecting pool and two processional avenues were ultimately completed. Surrounding the monument are oaks, a symbol of masculine strength and endurance to the Germanic people of antiquity. The oaks are complemented by evergreens, symbolising feminine fecundity, and they are located in a subordinate position to the oaks. The 12 metres (39 ft) main figure on the front of the memorial represents the archangel Michael, considered the “War god of Germans”.

During the Third Reich, Hitler frequently used the monument as a venue for his meetings in Leipzig.