Eutin Castle (German: Eutiner Schloss) in Eutin in the north German district of Ostholstein is the cultural centre and nucleus of the town and, together with Gottorf and Glücksburg Castles, belongs to the most important courtly secular buildings in the state of Schleswig-Holstein.

The four-winged palace originated from a medieval castle and was expanded over several centuries into a Residenz. The castle originally belonged to the Lübeck prince-bishops, later it became the summer residence of the Dukes of Oldenburg. The castle was regularly occupied until the 20th century and most of the interior has survived to the present-day. Today the castle houses a museum and is open to the public in summer. It is now owned by a family foundation headed by Anton-Günther, Duke of Oldenburg. The former Baroque garden was converted during the 18th and 19th century to a landscaped park; this is the venue for the Eutin festivals. 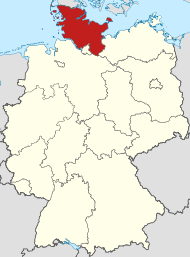