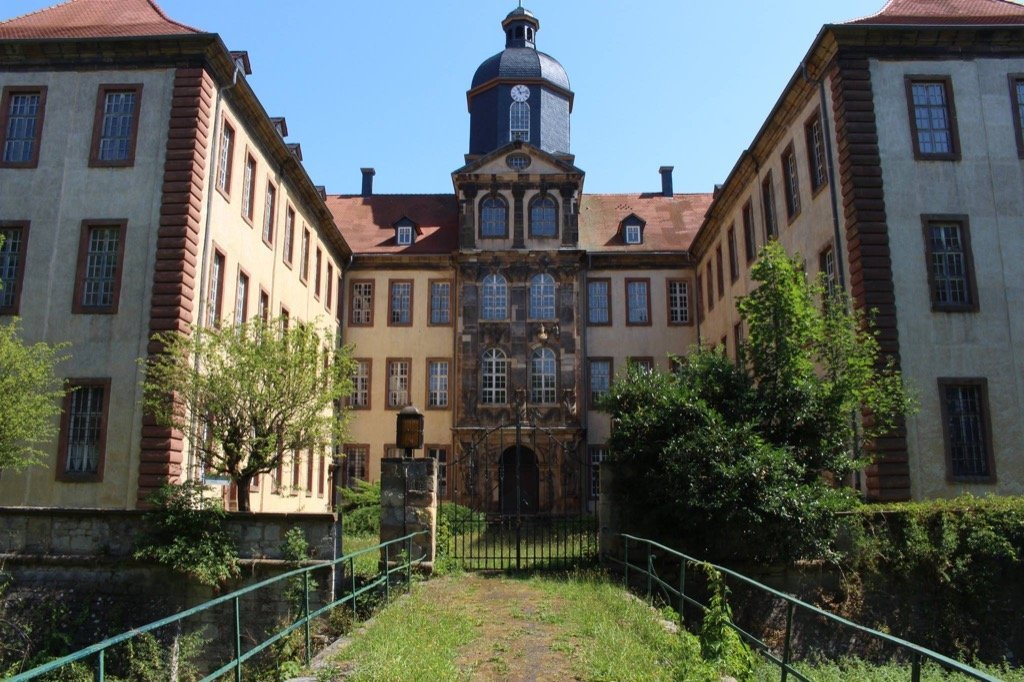 The Castle Friedrichswerth is located 13 km northwest of Gotha in the valley of the Nesse. The castle was built on the square of the previously Water Castle Erffa.

In the year 1677, the Duke Frederick I of Gotha commissioned his master builder Jeremiah Tütleb with the construction of a representative country castle and chose the village of Erffa with the homonymous water Castle as a building site. The construction of the castle was completed only 1689 and was solemnly concluded in July of the same year. The building served the ducal family as a pleasure castle and summer residence. Also a church was built at the same time as the castle. The village was renamed Friedrichswerth in honor of the Duke. The Duke, however, had only a short time to delight in his magnificent buildings, he died already in August 1691 at Schloss Friedrichswerth on the consequences of a stroke.
In the following years the castle served as a summer residence for the Dukes of Gotha as intended and became the centre of Splendour full of festivities. Under Duke Frederick III, the order of the hermit-an elitist club-was founded here. During the seven Years ‘ War, the castle was largely dispelled for fear of looting. The administrative buildings of the castle were already used to house the administration of Friedrichswerth, in March 1855 parts of the castle were handed over to the Ducal judicial administration.
From 1923 the castle was used as an educational institution and youth Centre.
In the 1930s, until 1942, the baroque interior design of the castle was partially restored. In the Second World War, extensive library collections were outsourced to the castle from the bomb-prone Berlin. At times, foreign workers also lived in the castle. In 1948, neglected children came to the building, then it became Youth Depot. During this time the illegal demolition of the Castle Church (only the altar painting was preserved) and the intake of intermediate ceilings fell. However, the stucco and the ceiling paintings remained intact. After the turnaround in 1990, the “International Confederation” established a training centre in the castle, which was abandoned at the end of the 1990s. Since then, the castle is empty and unused.

The castle complex consists of a three-symmetrical building complex in the centre of which the clock tower rises over a small courtyard and the ensuing park. The main entrance to the castle is via a bridge from the west.

The park.
This strictly symmetrical, rectangular area, limited by a circulating moat and walls, has an extension of about 290 x 80 m. In addition to exotic plants, fontainen and a grotto.

Friedrichswerth in Thuringia is a significant construction due to its fortification, the garden and the large chapel. It is one of the most elaborate pleasure castles of its time.