The Schloss Oberhausen is a classical castle complex in the upper district of Alt-Oberhausen-Mitte. The property gave the name to the 1846 station, which was built nearby and 1847 opened, and thus the later town of Oberhausen.
A predecessor from the 12th/13th century was around 200 meters away from the present location and has now disappeared completely. After the estate of the family of Dücker over the from the Hoven at the beginning of the 17th. In the 13th century, the family of Boenen had arrived, was built on the plot between 1804 and 1818 according to plans of the Münster builder August reinking a new castle for Maximilian Friedrich von West recovered-Gysenberg and his wife Friederike Karoline of Bretzenheim.
After serious damage in the Second World War, the manor house was rebuilt in the late 1950s according to old original plans. Today it houses an internationally renowned art museum with the Ludwig Galerie; The Castle Park with its leisure activities is a popular excursion destination of the people of the inhabitants of the city. Under the name “Schloss Oberhausen and Kaiser Garten” the buildings and the park have been a station of the theme route Oberhausen since the beginning of 2011: Industrial Power City of the route of industrial culture.

The castle Complex is located south of the A 42 on the Rhine-Herne Canal. On its east side is Konrad-Adenauer-Allee (b 223), the main connecting road between the districts of Sterkrade, Easterfield and old Oberhausen. The west-located Gasometer and Centro are within walking distance, as are the grounds of the former Gutehoffnungshütte, whose former head office is located southeast at approximately 900 metres distance.

The classicist complex consists of two complexes of buildings, which limit a square 50-metre-long courtyard. The facades are painted pink, cornices as well as window and Türfassungen in white.
The entire building complex used to serve as a farm, the northern wing was used as a horse stable.  in front of the southern wing, now used as a memorial, the basalt statue of Willy Meller is erected by the mourners. A inscription in front of her in the ground reminds the victims of both world wars.

The Gasometer Oberhausen is a former gas holder in Oberhausen, Germany, which has been converted into an exhibition space. It has hosted several large scale exhibitions, including two by Christo and Jeanne-Claude. The Gasometer is an industrial landmark, and an anchor point of the European Route of Industrial Heritage and the Industrial Heritage Trail. It was built in the 1920s, and reconstructed after World War II. 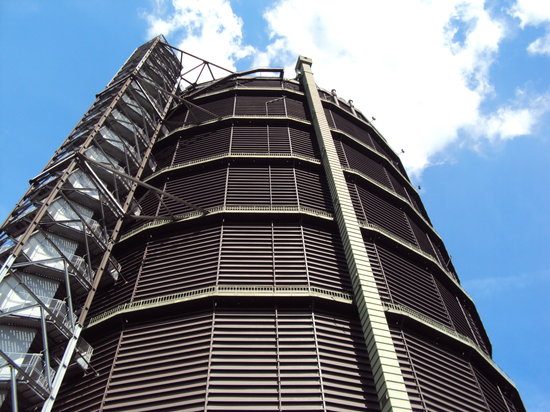 In the 1920s the coal and steel industry in the Ruhrgebiet produced blast furnace gas and coal gas as a by-product of iron production and coking, while the steel industry as well as coking used large amounts these gasses or alternative fuels. As supply and demand of gas varied independently, sometimes excess gas had to be flared off, while at other times additional fuel had to be purchased. The Gasometer was built as a buffer: storing excess gas and releasing it again when demand exceeded production.

The Gasometer was built by Gutehoffnungshütte, by the side of the Rhine-Herne Canal. Construction started 27 February 1927 and cost 1.74 million Reichsmark. A framework of 24 steel girders was built on a concrete base, and a skin of 5mm thick sheet metal was riveted to the framework. Inside, a 1,207,000 kg pressure disc was mounted which could freely move up and down, floating on top of the gas underneath and keeping it at a constant pressure. 15 May 1929 the Gasometer was first put into operation, with a maximum capacity of 347,000m³, a height of 117.5m and diameter of 67.6m.
During World War II, the Gasometer was hit by bombs several times, but kept operating. When it was shelled by allied forces it did not explode, but the gas burned up and the pressure disc slowly descended. The Gasometer officially stopped operating 31 December 1944. It was completely disassembled after it had caught fire during repair work on 10 June 1946. Reconstruction began 1949 using the original pressure disc and roof. By 1 June 1950 the Gasometer was operational again.

In 1977 the Gasometer was repainted, at a cost of 3.5 million DM. In later years many coking plants and iron works closed, reducing supply as well as demand for the gas stored in the Gasometer. In addition, natural gas became cheaper. The Gasometer became superfluous and in 1988 it was decommissioned by its owner, Ruhrkohle AG.

A discussion ensued about the dismantling or possible reuse of the Gasometer. In 1992 the city council of Oberhausen, with a margin of 1 vote decided to acquire the building and convert it to an exhibition space. At the time, plans were being developed for building shopping mall (CentrO) on an adjacent plot, and Internationale Bauausstellung Emscher Park planned to use the Gasometer for its exhibition. Ownership transferred to the city of Oberhausen, with Ruhrkohle AG paying 1.8 million DM in saved demolition costs to the city.

Conversion and restoration were done by Deutsche Babcock AG in 1993–1994. The former pressure disc was fixed at 4.5m height, with a 3000m² exhibition space on the ground floor below. The main exhibition space, on top of the pressure disc, was fitted with a stage and seating for 500 people. Lifts and stairs were fitted to provide visitors access to the roof. Conversion cost approximately DM 16 million.