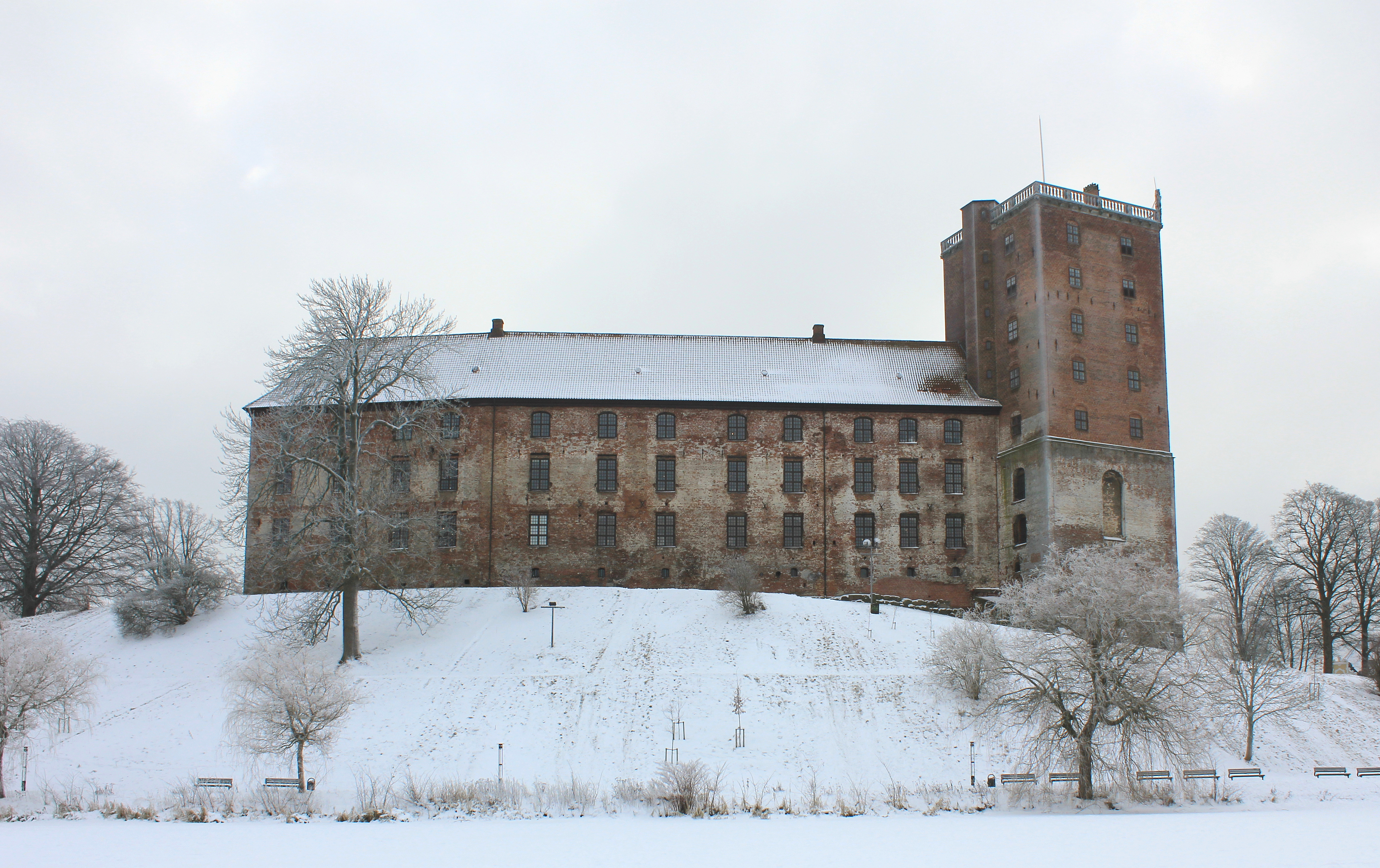 Koldinghus is a Danish royal castle in the town of Kolding on the south central part of the Jutland peninsula. The castle was founded in the 13th century and was expanded since with many functions ranging from fortress, royal residency, ruin, museum, and the location of numerous wartime negotiations.

Today the restored castle functions as a museum containing collections of furniture from the 16th century to present, Roman and Gothic church culture, older Danish paintings, crafts focused on ceramics and silver and shifting thematized exhibitions.

In 1250 Abel of Slesvig succeeded his older brother, Eric IV, as king of Denmark after the latter was murdered. Abel sent word for his son Valdemar studying in Paris to join him in Denmark for the crowning ceremony. During his trip home Valdemar was apprehended by the Archbishop of Cologne who demanded a ransom for his release. Abel did not have the required funds to have his son released and reasoning that it was Abel, not Valdemar, who was king of Denmark the Danish people had little sympathy for the predicament of their new king and no funds were thus raised.

In 1252 Abel suddenly died during an expedition to Friesland leaving the kingdom without a leader. The natural order of things would be to elect Valdemar as king but this seemed a poor choice since he was preoccupied in a prison cell in Cologne. This prompted the pragmatic election of Abel’s brother, Christoffer I, as the new king. Valdemar was released one year later when his family had finally succeeded to collect the funds for his ransom. Upon his return to Denmark Valdemar immediately challenged Christoffer for the throne but found little support. It was finally agreed that Valdemar would become Duke of Schleswig. This not being the optimal outcome for Valdemar several wars between the king of Denmark and the Duke of Schleswig ensued until it was finally decided to build a fortress to defend the southern borders against its troublesome neighbour.

After Christoffer I died in 1259, his son Eric was elected king. Eric V was just ten years old at the time and faced claims to the throne from Abel’s sons. It was in the context of this dynasytic intrigue the Koldinghus was built. Between 1267 and 1268 two towns on the border between the kingdom of Denmark and the Duchy of Schleswig: Kolding and Ribe. At Kolding, a hill in the centre of the town was chosen as the site for a castle. A moat was dug and wooden palisades erected. This was later to become Koldinghus.

In the 16th century cannons became more frequent tools of war and thick walled fortresses like Koldinghus partly lost their defensive significance. For this reason king Christian III added several buildings to the fortress and eventually turned it into a royal residence instead. The new residence became popular among the royal family and Prince Frederick, the heir apparent, grew up at Koldinghus. Christian III sometimes held court at the castle and it was here on 1 January 1559 that he died. When Christian IV became king in 1588 he choose to expand it further with the addition of the “Giant tower”. The tower was so named because of the 4 statues of giants from the Greek and Roman mythology (Hannibal, Hector, Scipio and Hercules) which adorned it. Today, the only statue on the tower is that of Hercules, since Hannibal and Hector were crushed during the 1808 fire and in a storm in 1854, Scipio fell to the ground.

Over the course of time Copenhagen became the focal point of the political power and the outlying local royal residences were used less and less frequently. When Frederik IV became king he decided to remove most of the remaining surrounding walls leaving Koldinghus as it can be seen today. 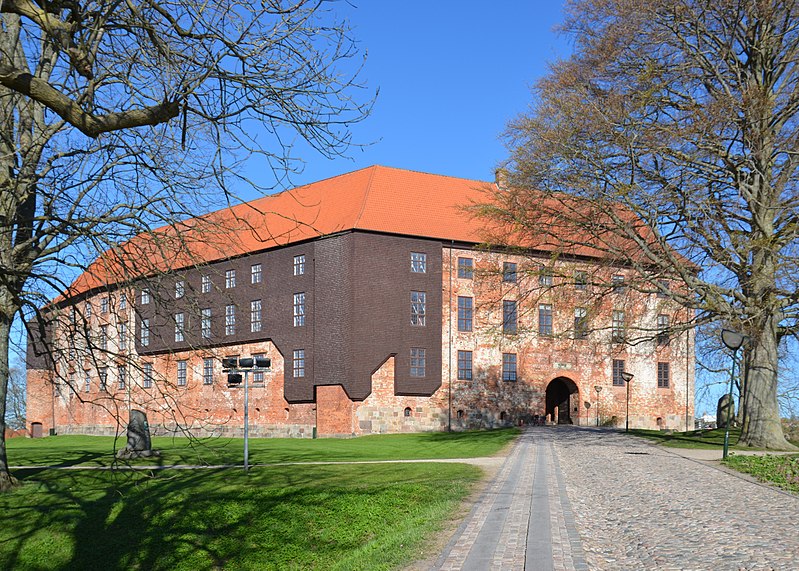 During the Napoleonic wars in 1808 Denmark had allied herself with France and Spain against among others Sweden and England. It was decided that 30.000 French and Spanish soldiers were to be stationed in Denmark to assist in a campaign to recuperate the Scanian lands lost to Sweden 150 years earlier.

The Spanish soldiers arrived during the winter of 1808 and were quartered at Koldinghus under the supervision of their French commander Jean-Baptiste Bernadotte (later to become king of Sweden and Norway). The Scandinavian climate typically being somewhat colder than that of Spain and France reportedly resulted in much activity around the furnaces and stoves to the extent of even furniture being set alight. This combined with the unusually large number of people concentrated in the castle may have been contributing factors to the fire which erupted in the early hours of a winter night.

The danger of a fire had been anticipated and fire guards had been posted to patrol the castle throughout the nights. However, one was ill and had not reported that he stayed home and the other had left his post for some hours. In any event, the fire was discovered all too late to salvage the main buildings. Only the “Giant tower” remained untouched by the flames.

Another unhappy turn of events saw the Spanish contingent defect and return to Spain at the prospect of spending the Danish winter nights without shelter.

On March 29, 2008, the fire was re-enacted by use of smoke, lighting and sound because of the 200 year anniversary of the fire.

The ongoing events in the Napoleonic wars were not favourable to the kingdom and funds remained too tight to immediately warrant a reconstruction of the castle. It remained a ruin for several decades to come and over time became a popular landmark visited by among others HC Andersen. It was eventually decided to restore the old castle and in 1991 it was completed. 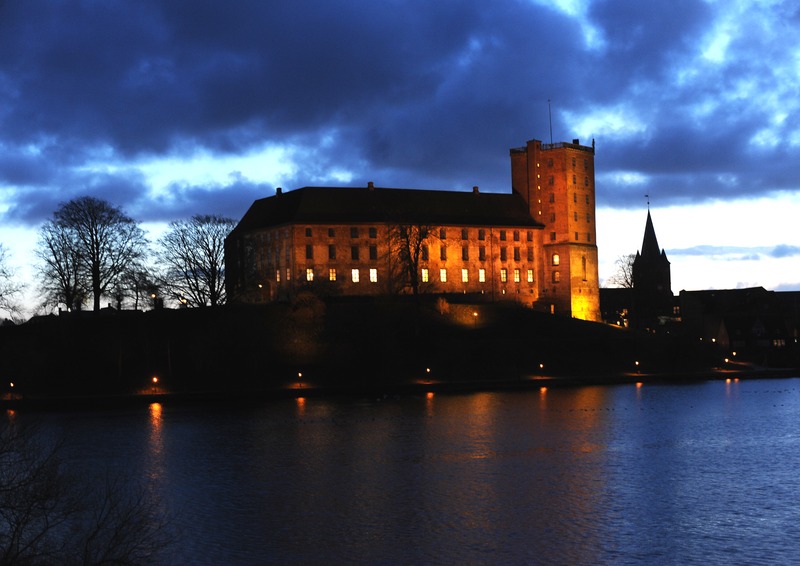