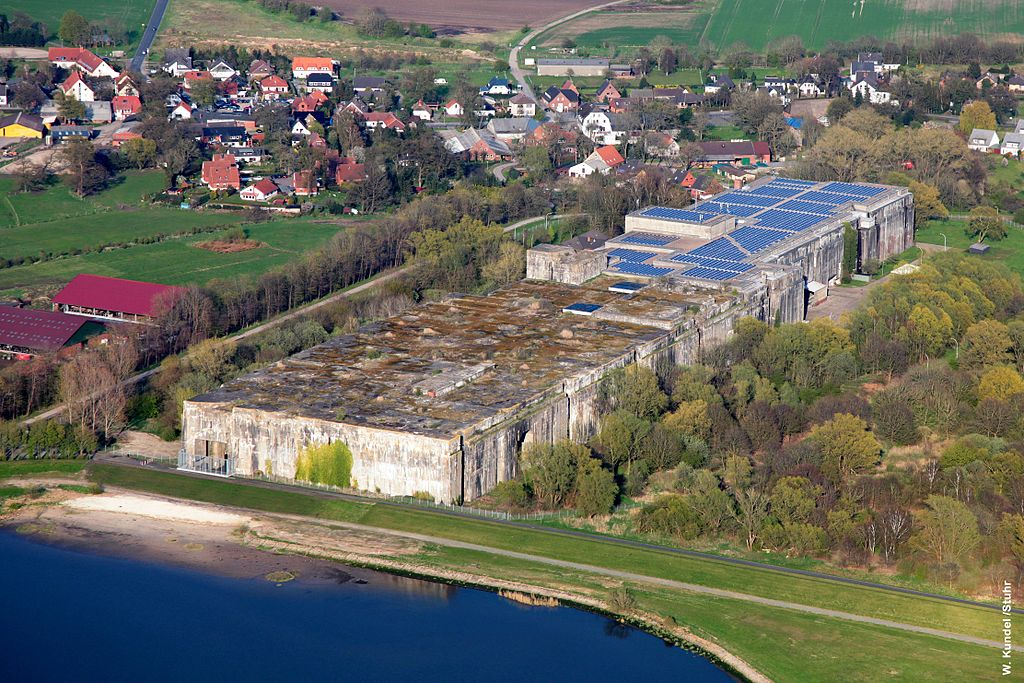 The Valentin submarine factory is a protective shelter on the Weser River at the Bremen suburb of Rekum, built to construct German U-boats during World War II. The factory was under construction from 1943 to March 1945 using forced labour, but was damaged by air-raids and unfinished by the end of the war. The Valentin factory was the largest fortified U-boat facility in Germany, and was second only to those built at Brest in France.

As a manufacturing facility, it differed from conventional U-boat pens, which were designed to house and service operational U-boats. Production of U-boats by German shipyards had been dramatically reduced as a result of bombing by the (((Royal Air Force))) and the (((United States Army Air Forces))), necessitating the creation of bomb-proof production sites. Many such sites were in use in 1944, including the U-boat pen Nordsee III on the German island of Helgoland, Fink II and Elbe II in Hamburg and Kilian in Kiel. Other sites in Germany and other occupied countries were under construction or planned, such as Hornisse in Bremen, Elbe XVII and Wenzel in Hamburg, Wespe in Wilhelmshaven, Kaspar in Kiel. Under the codename Valentin a submarine factory was to be built directly on the Weser river between the Bremen suburbs Rekum and Farge. It was intended the facility would be used for the final assembly of Type XXI submarines, starting in April 1945 with three boats and from August 1945 a monthly delivery of a minimum of 14 boats. A second bunker called Valentin II was planned as well.

The design and oversight of the Valentin’s construction was carried out by the Organisation Todt. Marineoberbaurat Edo Meiners was in charge overall; the on-site supervising engineer was Erich Lackner. He had a lengthy post-war career, becoming one of Germany’s most prominent civil engineers.

By March 1945, the facility was 90% completed and the most of the necessary machine tools had been installed. Production of U-boats was due to begin within two months.

After completion, the bunker would have had a work–force of around 4,500 slave workers. Under the management of the Bremer Vulkan shipyard, it would assemble U-boats. Each would be built from eight, large, pre-fabricated sections manufactured in other shipyards such as Bremer Vulkan, Deschimag AG Weser with its bunker Hornisse, Kriegsmarinewerft Wilhelmshaven with bunker Wespe and Deschimag Seebeckwerft in Bremerhaven, and then shipped to Valentin on barges.

The bunker was to house 13 assembly bays (calledTaktplatz in German, or Takt for short), each carrying out one part of the assembly process. Two bays, Takt 9 and Takt 10, were underneath box-like structures on the roof that allowed the extra height needed for the installation of periscopes, snorkels and antennas. The two last bays, Takt 12 and Takt 13, were separated by high walls from the rest of the building and could be closed by water-tight floodgates. Takt 13, the final bay, was a dry dock with an 8-metre (26 ft) deep pool of water. The two separated bays could be flooded to give a total water depth of about 20 metres from the bottom of Takt 13’s dry dock to the water-surface at the building’s roof-level. Takt 13 was to be used for leak–tests of the completed U-boats as well as engine starts and other tests. In addition to the 13 assembly bays, the bunker housed workshops and store-rooms for the prefabricated sections, diesel-engines and batteries, and storage tanks for fuel and lubricants.

The gateway in the western wall could be closed by means of a sliding bomb-proof door which opened to a small canal, a creek and then directly onto the Weser river. Through this, sections of submarine would be delivered by barges and completed submarines could leave.

Operations at Valentin were intended to commence by late 1944, but was postponed to mid-1945 due in part to a combination of manpower and supply shortages and bombing. It is likely that production would have been limited due to the severe quality control problems experienced with the prefabricated sections. Albert Speer (the Reich armaments minister) had directed that the sections be made by inland companies and then assembled at the shipyards so as to ease production. However, these companies had little experience in shipbuilding resulting in lengthy re-working to rectify flaws in the sections. Out of the 118 boats completed, only four were rated fit for combat before the war ended in Europe.

After the war, when the already installed machine tools had been removed, further bombing of Valentin was carried out. Beginning in March 1946, Project Ruby was a joint Anglo-American affair to investigate the use of penetration bombs against heavily protected concrete targets.

The U-boat pen Nordsee III and subterranean bunkers on the island of Heligoland were also selected as targets for this testing. Bombs were carried by Avro Lancasters from No. 15 Squadron RAF and US Boeing B-29 Superfortress and Boeing B-17 Flying Fortress aircraft operating from RAF Marham. Around 140 sorties were flown, testing a range of different bombs.

Because it seemed impossible to destroy Valentin by bombing it, the decision was made to destroy it by blasting. This idea was later abandoned because the blasting would have caused severe damage to the nearby villages of Rekum and Farge including the power-station in Farge. In 1960 the bunker was taken over by the German Navy, for use as a storage depot.

In 1983, a memorial to the workers who built Valentin was erected. Titled Vernichtung durch Arbeit (Extermination through labour), it was by Bremen artist Fritz Stein.[10]

High maintenance costs forced the German Defence Ministry to offer the bunker for sale in 2008. Military use finally came to an end on 31 December 2010. Its custodianship was passed to a group called Denkort Bunker Valentin with the intention of developing it as a museum and a memorial. The group currently offers guided tours of the bunker to the public.