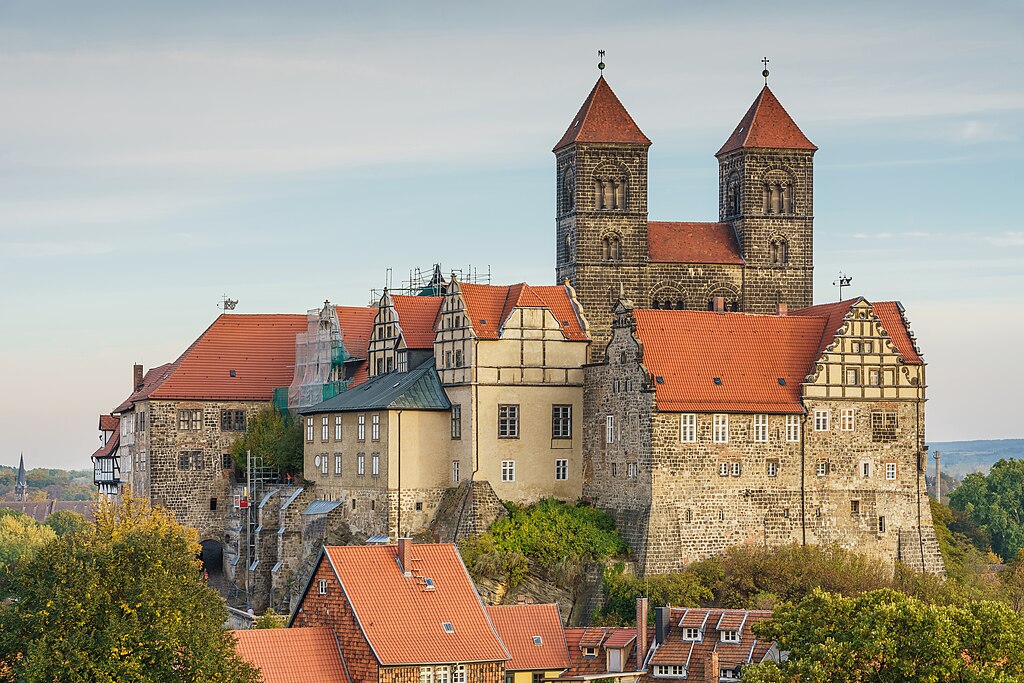 Quedlinburg (German pronunciation: [ˈkveːdlɪnbʊʁk]) is a town situated just north of the Harz mountains, in the district of Harz in the west of Saxony-Anhalt, Germany. In 1994, the castle, church and old town were added to the UNESCO World Heritage List.

The town of Quedlinburg is known to have existed since at least the early 9th century, when there was a settlement known as Gross Orden on the eastern bank of the River Bode. It was first mentioned as a town in 922 as part of a donation by King Henry the Fowler (Heinrich der Vogler). The records of this donation were held by the abbey of Corvey.

According to legend, Henry had been offered the German crown at Quedlinburg in 919 by Franconian nobles, giving rise to the town being called the “cradle of the German Reich”.

During the National Socialism , the memory of Henry I became a sort of cult, as Heinrich Himmler saw himself as the reincarnation of the “most German of all German” rulers. The collegiate church and castle were to be turned into a shrine for National Socialist Germany. The National Socialist Party tried to create a new religion. The cathedral was closed from 1938 and during the war. The local crematory was kept busy burning the victims of the Langenstein-Zwieberge concentration camp. Georg Ay was local party chief from 1931 until the end of the war. Liberation in 1945 brought back the Protestant bishop and the church bells, and the National Socialist-style eagle was taken down from the tower.

During the last months of World War II, the United States military had occupied Quedlinburg. In the 1980s, upon the death of one of the US military men, the theft of medieval art from Quedlinburg came to light.

Quedlinburg was administered within Bezirk Halle while part of the Communist East Germany from 1949 to 1990. It became part of the state of Saxony-Anhalt upon German reunification in 1990.

The town is located north of the Harz mountains, about 123 m above NHN. The nearest mountains reach 181 m above NHN. The largest part of the town is located in the western part of the Bode river valley. This river comes from the Harz mountains and flows into the river Saale, a tributary of the river Elbe. The municipal area of Quedlinburg is 120.42 square kilometres (46.49 square miles). Before the incorporation of the two (previously independent) municipalities of Gernrode and Bad Suderode in January 2014 it was only 78.14 square kilometres (30.17 square miles).

In the centre of the town, a wide selection of half-timbered buildings from at least five different centuries are to be found (including a 14th-century structure, one of Germany’s oldest), while around the outer fringes of the old town are examples of Jugendstil buildings, dating from the late 19th and early 20th centuries.

Since December 1994, the old town of Quedlinburg and the castle mount with the Stiftskirche (collegiate church) are listed as one of UNESCO‘s World Heritage Sites. Quedlinburg is one of the best-preserved medieval and Renaissance towns in Europe, having escaped major damage in World War II.

In 2006, the Selke valley branch of the Harz Narrow Gauge Railways was extended to Quedlinburg from Gernrode, giving access to the historic steam narrow gauge railway, Alexisbad and the high Harz plateau.

The castle and Stifstkirche St. Servatius still dominate the town like in the early Middle Ages. The church is a prime example of German Romanesque style. The treasure of the church containing ancient Christian religious artifacts and books, was stolen by an American soldier but brought back to Quedlinburg in 1993 and is again on display here.

The former Stiftskirche St. Wiperti was established in 936 when the Kanonikerstift St. Wigpertus (of male canons) was moved from the castle hill to make way for what became Quedlinburg Abbey. The church was built at the location of the first, Ottonian, Royal palace at Quedlinburg. Around 1020, a three-aisled crypt was added to the basilica. The crypt, which survived all later alterations to the church, today is also a designated stop on the Romanesque Road.