MV Wilhelm Gustloff was a German military transport ship which was sunk on 30 January 1945 by Soviet submarine S-13 in the Baltic Sea while evacuating German civilians, German officials and military personnel from Gdynia (Gotenhafen) as the Red Army advanced. By one estimate, 9,400 people died, which makes it the largest loss of life in a single ship sinking in history.

Constructed as a cruise ship for the Kraft durch Freude (Strength Through Joy) organisation in 1937, she had been requisitioned by the Kriegsmarine (German navy) in 1939. She served as a hospital ship in 1939 and 1940. She was then assigned as a floating barracks for naval personnel in Gdynia (Gotenhafen) before being put into service to transport evacuees in 1945. 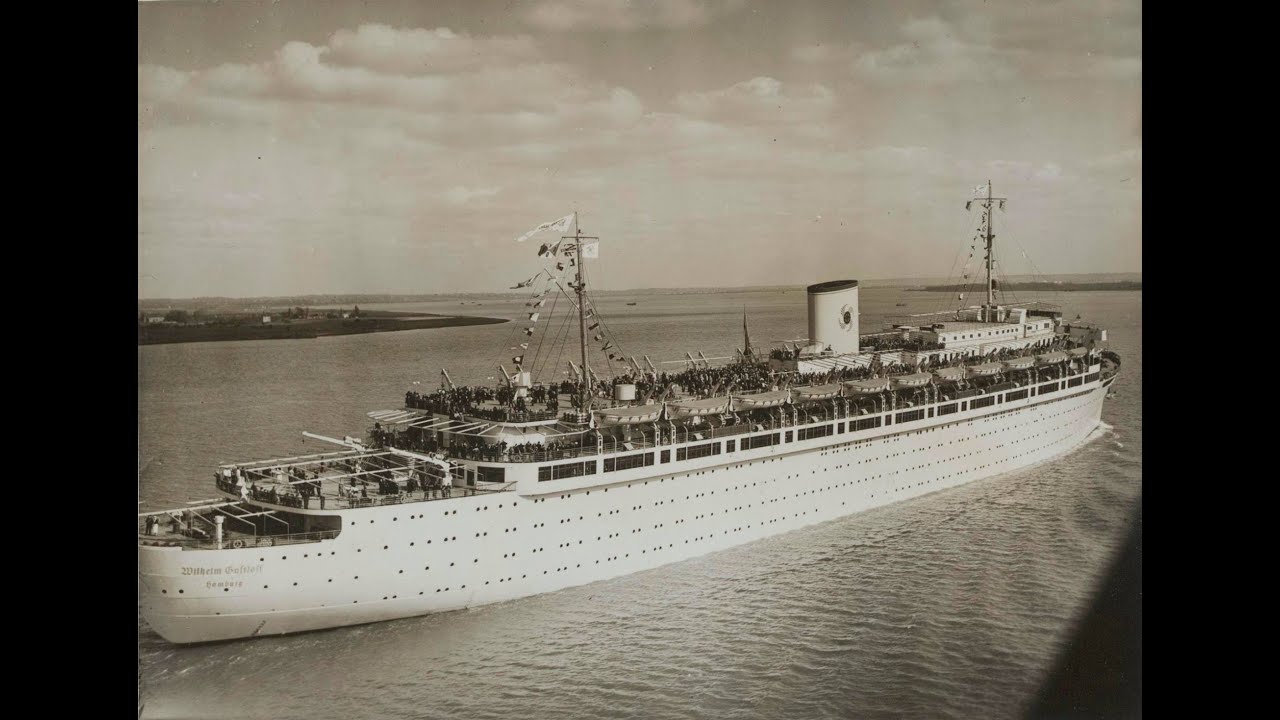 The ship was originally intended to be named Adolf Hitler but was named after Wilhelm Gustloff, a leader of the National Socialist Party‘s Swiss branch, who had been assassinated by a Jewish medical student in 1936. Hitler decided on the name change after sitting next to Gustloff’s widow during his memorial service.

The ship was sighted by the Soviet submarine S-13, under the command of Captain Alexander Marinesko. The submarine sensor on board the escorting torpedo boat had frozen, rendering it inoperable, as had Wilhelm Gustloff‘s anti-aircraft guns, leaving the vessels defenseless. Marinesko followed the ships to their starboard (seaward) side for two hours before making a daring move to surface his submarine and steer it around Wilhelm Gustloff’s stern to attack it from the port side closer to shore, where the attack would be less expected. At around 9 pm (CET), Marinesko ordered his crew to launch four torpedoes at Wilhelm Gustloff‘s port side about 30 km (16 nmi; 19 mi) offshore between Großendorf and Leba. The first was nicknamed “for the Motherland,” the second “for Leningrad,” the third “for the Soviet people” and the fourth torpedo which got jammed in the torpedo tubes and had to be dismantled was called “for Stalin.”

The three torpedoes which were fired successfully all struck the Gustloff on its port side.

The first torpedo which struck the Gustloff’s bow caused the watertight doors to seal off the bow which contained the crews’ quarters where off-duty crew members were sleeping. The second torpedo hit the accommodations for the women’s naval auxiliary located in the ship’s drained swimming pool; dislodging the pool tiles at high speed, which caused heavy casualties, and only three of the 373 quartered there survived. The third torpedo was a direct hit on the engine room located amidships, disabling all power and communications. Reportedly, only nine lifeboats were able to be lowered; the rest had frozen in their davits and had to be broken free. About 20 minutes after the impact of the torpedoes, Wilhelm Gustloff listed dramatically to port so that the lifeboats lowered on the high Starboard side crashed into the ship’s tilting side, destroying many lifeboats and spilling their occupants across the ship’s side. The water temperature in the Baltic Sea at that time of year is usually around 4 °C (39 °F); however, this was a particularly cold night, with an air temperature of −18 to −10 °C (0 to 14 °F) and ice floes covering the surface. Many deaths were caused either directly by the torpedoes or by drowning in the onrushing water. Others were crushed in the initial stampede caused by panicked passengers on the stairs and decks. Many others jumped into the icy Baltic. The majority of those who perished succumbed to exposure in the freezing water.

Less than 40 minutes after being struck, Wilhelm Gustloff was lying on her side and sank bow-first ten minutes later, in 44 m (144 ft) of water.

All four captains on Wilhelm Gustloff survived her sinking, but an official naval inquiry was started only against Wilhelm Zahn. His degree of responsibility was never resolved, however, because of Germany’s collapse in 1945.

The figures from the research of Heinz Schön make the total lost in the sinking to be 9,343 total, including about 5,000 children.

Heinz Schön’s more recent research is backed up by estimates made by a different method. An episode of Unsolved History that aired in March 2003 on the Discovery Channel program undertook a computer analysis of her sinking. Using software called maritime EXODUS  it was estimated 9,600 people died out of more than 10,600 on board. This analysis considered the passenger density based on witness reports and a simulation of escape routes and survivability with the timeline of the sinking.