The Rotes Rathaus (German: [ˈʁoːtəs ˈʁaːtˌhaus], Red City Hall) is the town hall of Berlin, located in the Mitte district on Rathausstraße near Alexanderplatz. It is the home to the governing mayor and the government (the Senate of Berlin) of the Federal state of Berlin. The name of the landmark building dates from the facade design with red clinker bricks.

The Rathaus was built between 1861 and 1869 in the style of the north Italian High Renaissance by Hermann Friedrich Waesemann. It was modelled on the Old Town Hall of Toruń, today Poland, while the architecture of the tower is reminiscent of the cathedral tower of Notre-Dame de Laon in France. It replaced several individual buildings dating from the Middle Ages and now occupies an entire city block.

The building was heavily damaged by Allied bombing in World War II and rebuilt to the original plans between 1951 and 1956. The Neues Stadthaus, which survived the bombing and had formerly been the head office of Berlin’s municipal fire insurance Feuersozietät in Parochialstraße served as the temporary city hall for the post-war city government for all the sectors of Berlin until September 1948. Following that time, it housed only those of the Soviet sector. They reconstructed Rotes Rathaus, then located in the Soviet sector, served as the town hall of East Berlin, while the Rathaus Schöneberg was the town hall of West Berlin. After German reunification, the administration of reunified Berlin officially moved into the Rotes Rathaus on 1 October 1991. 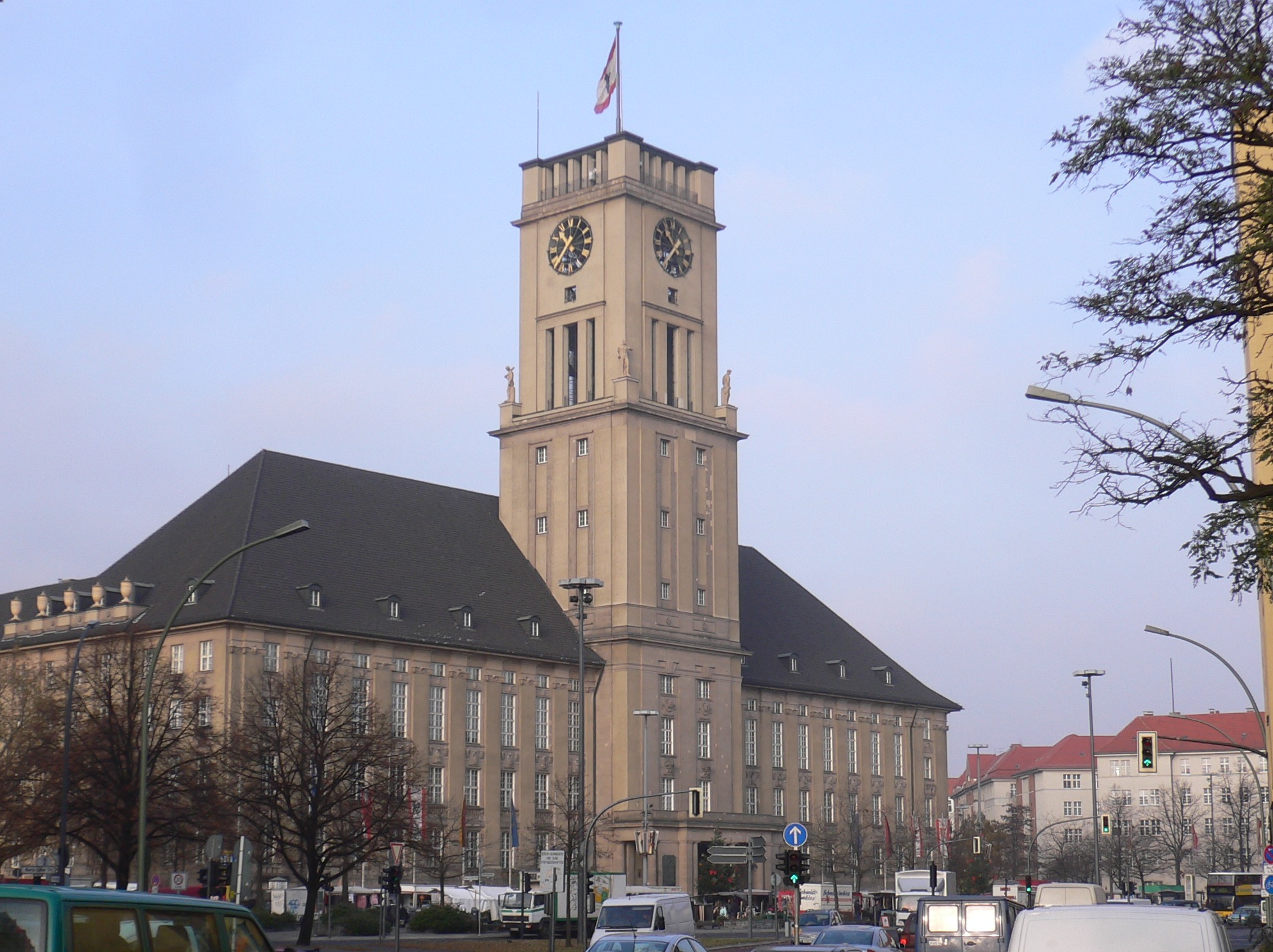 The sandstone building was constructed between 1911–1914, when it replaced the old town hall of Schöneberg, at that time an independent city (German: Stadtkreis) not yet incorporated into Greater Berlin, which took place in 1920. In World War II the building was severely damaged by Allied bombing and during the final Battle of Berlin. During the Berlin Blockade, the Uprising of 1953 and the Hungarian Revolution of 1956, Rudolph-Wilde-Platz in front of the building became a gathering place for protest rallies. After the construction of the Berlin Wall in 1961, the steps of Rathaus Schöneberg were the location where U.S. President John F. Kennedy spoke on 26 June 1963, proclaiming “Ich bin ein Berliner“. On the night of his assassination, several thousand Berliners spontaneously gathered at the square, which was officially renamed John-F.-Kennedy-Platz three days later. A large memorial plaque, mounted on a column at the entrance of the building, and the room above the entrance overlooking the square are dedicated to Kennedy and his visit.

There was a large assembly in front of the Rathaus on 10 November 1989, the day after the fall of the Berlin Wall. Prominent people attending were chancellor Helmut Kohl, former chancellor Willy Brandt and foreign minister Hans-Dietrich Genscher.