SSCV Thialf is a semi-submersible crane vessel operated by Heerema Marine Contractors, and it is the largest crane vessel in the world.

The ship was constructed in 1985 as DB-102 for McDermott International by Mitsui Engineering & Shipbuilding Co., Ltd. In 1997, it was taken over by Heerema Marine Contractors after discontinuation of their joint venture with McDermott, HeereMac, and renamed Thialf.

It is equipped with a class III dynamic positioning system. Propulsion and position keeping is by six 5,500 kW retractable azimuthing thrusters. For shallow waters there are 12 Flipper Delta anchors, 22.5 t, with 2,500 meter, 80 mm mooring wire.

The hull consists of two pontoons with four columns each. Transit draught is about 12 metres. For lifting operations it will normally be ballasted down to 26.6 m (87 ft). This way the pontoons (with a draught of 13.6 metres) are well submerged to reduce the effect of waves and swell.

It is able to accommodate 736 people. Semi-submersible crane vessel (SSCV) Sleipnir is a large lifting ship owned and operated by Heerema Marine Contractors. It is named for Sleipnir, the eight-legged horse ridden by Odin in Norse mythology. The vessel is equipped with two revolving cranes built by Huisman Equipment B.V., each with a capacity of 10,000 t (11,000 short tons); the main cranes can be operated in tandem to jointly lift 20,000 t (22,000 short tons). It was ordered in 2015 and built in Singapore by Sembcorp Marine. After its completion in 2019, SSCV Sleipnir succeeded Heerema’s earlier SSCV Thialf as the largest crane vessel in the world.

The vessel is essentially a large platform supported by eight columns (four on each side), with one pontoon per side. Typical SSCVs use larger columns under the cranes to provide support, which can lead to severe pitching in rough seas; SSCV Sleipnir uses columns that are symmetrical fore and aft for calmer motions under higher sea states. The columns are rounded to reduce wave interactions, and the pontoons are streamlined to reduce drag.

The ship’s ballast tanks and LNG storage are contained within the eight columns. Each column is 23.75 m (77.9 ft) tall and has a staircase connecting the deck with the pontoon below.

Sleipnir outside Aibel in Haugesund, Norway 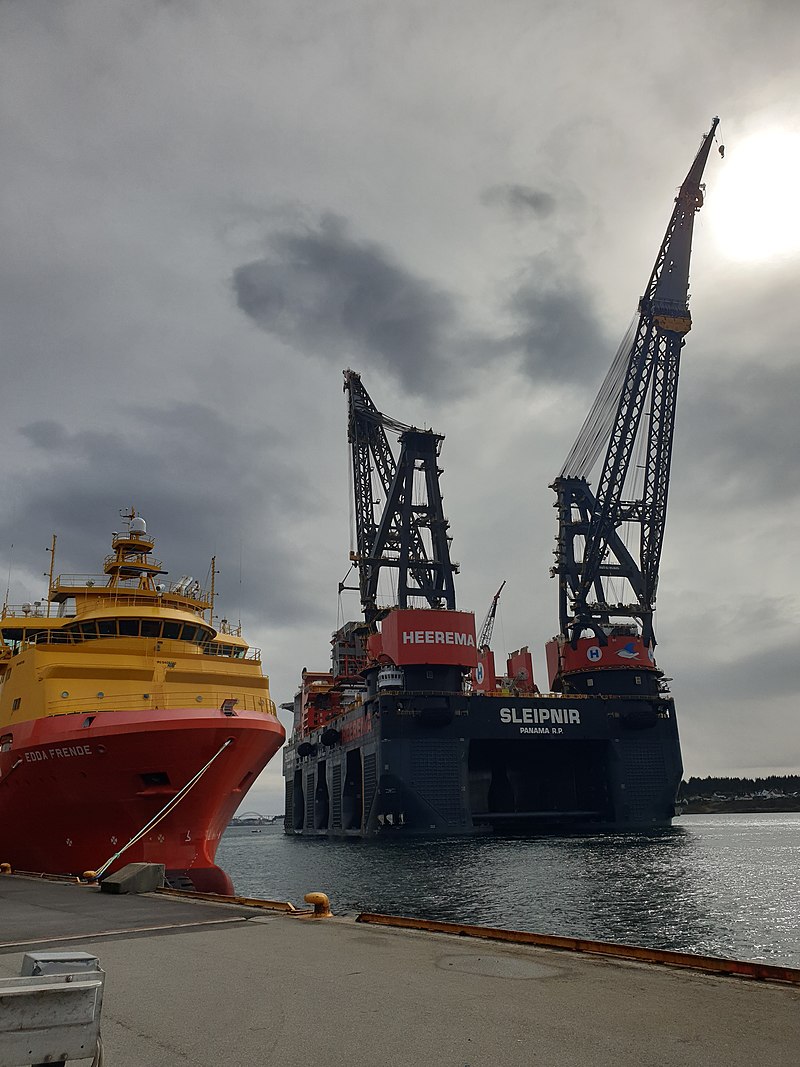 The two large port and starboard tub-mounted cranes are provided by Huisman; overall boom length is 144 m (472 ft). The slewing system, which allows the cranes to rotate in their tub, uses the world’s largest bearings at 30 m (98 ft) in diameter. Conventional tub-mounted cranes ride on bogies or wheels, while the Huisman 10,000t cranes use the bearing directly. Prior to the cranes for Sleipnir, the largest bearings Huisman had used for tub-mounted cranes were only 12 m (39 ft) in diameter. The crane house is secured to the foundation using 1,100 bolts 82 mm (3.2 in) in diameter, held in place by nuts weighing more than 40 kg (88 lb).

Each lifting frame weighs 1,170 t (1,290 short tons), and each boom weighs 1,465 t (1,615 short tons). The large port and starboard cranes were fabricated at Huisman’s factory in Xiamen, China, and shipped in pieces to Singapore; the BigLift Shipping RoRo ship Baffin was used to ferry the luffing frame and boom along with other large pieces in 2018.

The fuel capacity is 8,000 m3 (280,000 cu ft) of LNG, which allows Sleipnir to cross the Atlantic or remain on station for one month. Heerema intends to use primarily LNG fuel, except where terminals lack the infrastructure to provide LNG bunkers. SCR will be used with MGO to reduce NO
x emissions.

For SSCV Sleipnir, the forward thrusters are retractable to increase overall efficiency and protect them from damage in shallow waters; a rack-and-pinion system is used to retract the thrusters with a cycle time of 10 minutes. The WST-65U has a propeller 4.2 m (14 ft) in diameter driven by a propeller shaft tilted at 8° from horizontal to reduce the interaction with the hull and associated hydrodynamic losses.

SSCV Sleipnir is equipped with nine Harding FF1200 freefall lifeboat systems, including davits; each lifeboat has a capacity of 70.

Although the concept of a crane vessel larger than SSCV Thialf was studied as early as 2008, market conditions precluded formal design work until 2011. Heerema developed the concept internally from 2011 to 2012, determining the optimum vessel type and capabilities.

GVA Consultants completed preliminary conceptual studies for a new crane vessel for Heerema in March 2013, and were awarded a basic design contract in February 2014. Heerema intended for the new crane vessel to provide lifting capacities in the segment between the largest SSCVs (such as SSCV Thialf and Saipem 7000, capable of lifting 14,000 t (15,000 short tons) using deck-mounted revolving cranes) and floatover lifters (such as Pioneering Spirit, capable of 48,000 t (53,000 short tons) with significantly less flexibility). One month later, in March 2014, Heerema signed a letter of intent with Huisman to supply the world’s largest offshore cranes; the cranes were to be equipped on the new crane vessel, designated NSCV, for New Semi-submersible Crane Vessel, in lieu of a name.

In March 2015, Heerema Offshore Services B.V. signed a letter of intent with Jurong Shipyard Pte Ltd to build NSCV in Singapore; Jurong’s parent Sembcorp Marine announced the contract, worth US$1 billion, had been awarded on July 15, 2015. NSCV was planned to be built at Phase II of Sembcorp’s Tuas Boulevard Yard, in an offshore dock measuring 255 by 110 m (837 by 361 ft), and was scheduled for delivery at the end of 2018. The drydock construction was a unique factor in Sembcorp’s favor when Heerema was evaluating bids for construction. The first steel was cut for the cranes, which were being built in China, in July 2015. Heerema announced the NSCV would be named Sleipnir, for Odin’s eight-legged horse, on December 18, 2015.

The two main port and starboard cranes were installed by August 2018. The vessel was christened SSCV Sleipnir by Mrs. Maha Hatfield on May 24, 2019, and embarked on sea trials and crane load tests afterwards.  Sea trials were completed in late June 2019.

Heerema booked its first contracts for SSCV Sleipnir in 2017, two years before it was completed. During the ship’s maiden voyage from Singapore to Spain via the Cape of Good Hope, it set a world record for the largest LNG bunkering operation on July 10, when 3,000 t (3,300 short tons) of LNG were transferred to it off the coast of Sumatra from Coral Fraseri, chartered by Titan LNG from Anthony Veder. Coral Fraseri was scheduled to refuel Sleipnir in Spain, prior to it passing into the Mediterranean Sea.

Sleipnir is next contracted to install the production and living quarters platforms of the Tyra Future project for Maersk Oil. The existing Tyra platforms will be picked by Sleipnir and loaded on barges for recycling. Other future contracts include Brae Bravo (jacket and topsides removal) and Hollandse Kust Zuid Alpha (HVAC platform installation).