In general, public opinion in these countries has supported membership of the EU, which was associated with the security and prosperity of the liberal West. What’s more, Central Europeans benefit economically from the many billions of euros in financial aid and from the right to work in Western Europe with its much higher salaries. 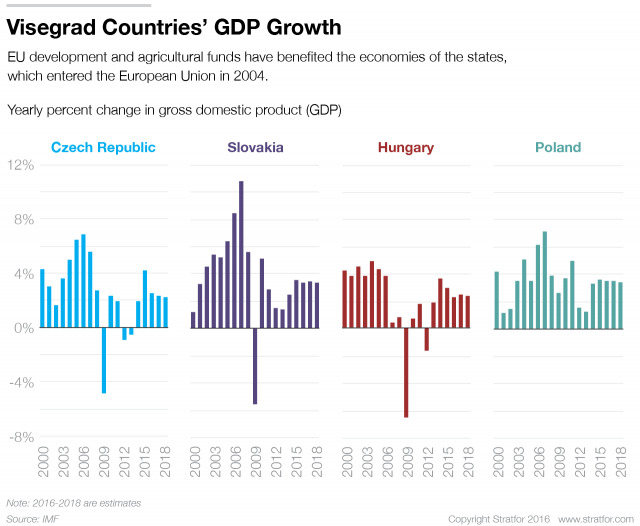 The Visegrad Group has gained from its membership in the European Union. Its members are among the main beneficiaries of EU development and agricultural funds, and they experienced high economic growth rates in the decade leading up to their accession to the bloc and in the years directly after joining. Recent years, however, have proved more difficult for the Visegrad states. The mounting pressures caused by the 2008 European financial crisis and the more recent migrant crisis have widened the divisions within the bloc; each of the Visegrad countries has experienced an economic slowdown, and border fences have been erected to mitigate refugee flows. In the meantime, political tension between the European Union and some of its member states over domestic policies such as media freedom and constitutional changes has grown. 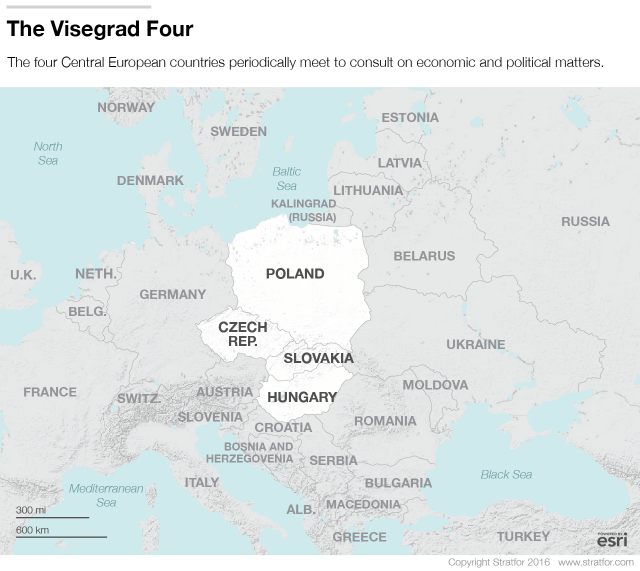 I don’t know why they keep calling them Central European.

While in terms of the population the V4 group could be compared with Germany, its GDP is nearly 4 times smaller, and the exports are 2.5 times lower. The total GDP of the V4 at current prices is a little larger than that of the Netherlands, and after adjusting for the purchasing power of the currencies it is more or less equal to the GDP of Spain.

The V4 countries are connected by history, including economic history. For hundreds of years the Czech Republic, Slovakia and Hungary were part of the Austrian Empire, and for several decades they were part of the economic organization Comecon (Council for Mutual Economic Assistance), alongside Poland. In the 20th century, the Czech Republic and Slovakia were one state. Therefore, the trade ties between the countries of the V4 should be very strong.

Also in terms of direct investment it is capital from Western Europe that prevails in the countries of the V4. In Poland, until the end of 2014 the largest investments were made by capital from the Netherlands, followed by Germany, Luxembourg, France, Spain, Italy, Cyprus, Austria, the USA and the United Kingdom. Hungarian companies invested EUR648m, Slovakian companies – EUR337m and Czech companies – EUR172m. More money was invested by companies from more distant countries: Malta (EUR733m), Norway (EUR1.032bn), Finland (EUR1.5bn) and Denmark (nearly EUR3bn).

In the Czech Republic until the end of 2014 (the Czech National Bank still has not published the data for 2015) first place was occupied by capital from the Netherlands, followed by Austria, Germany, Luxembourg, France, Switzerland, Cyprus, Slovakia and the USA. Until the end of 2014 Polish investment in the Czech Republic amounted to EUR1.314bn, which puts Poland in 13th position in the ranking.

The National Bank of Slovakia provides information about foreign direct investment only up to the year 2008. Up to that year the largest direct investments were carried out by companies from the Netherlands, followed by capital from Austria, Italy, Hungary, the Czech Republic, Cyprus, Luxembourg, South Korea, the USA and France.

The economies of the four countries of the Visegrad Group are similar to each other. They have a high share of industry in their GDP, they are trying to attract foreign investment and they are competing against each other in that field by striving to offer the best conditions. They are dependent on the import of raw materials (mainly from Russia) and they are looking for markets, primarily in Western Europe. With all due sympathy – for the time being the conditions for a deeper economic integration of the Visegrad countries are nowhere in sight.