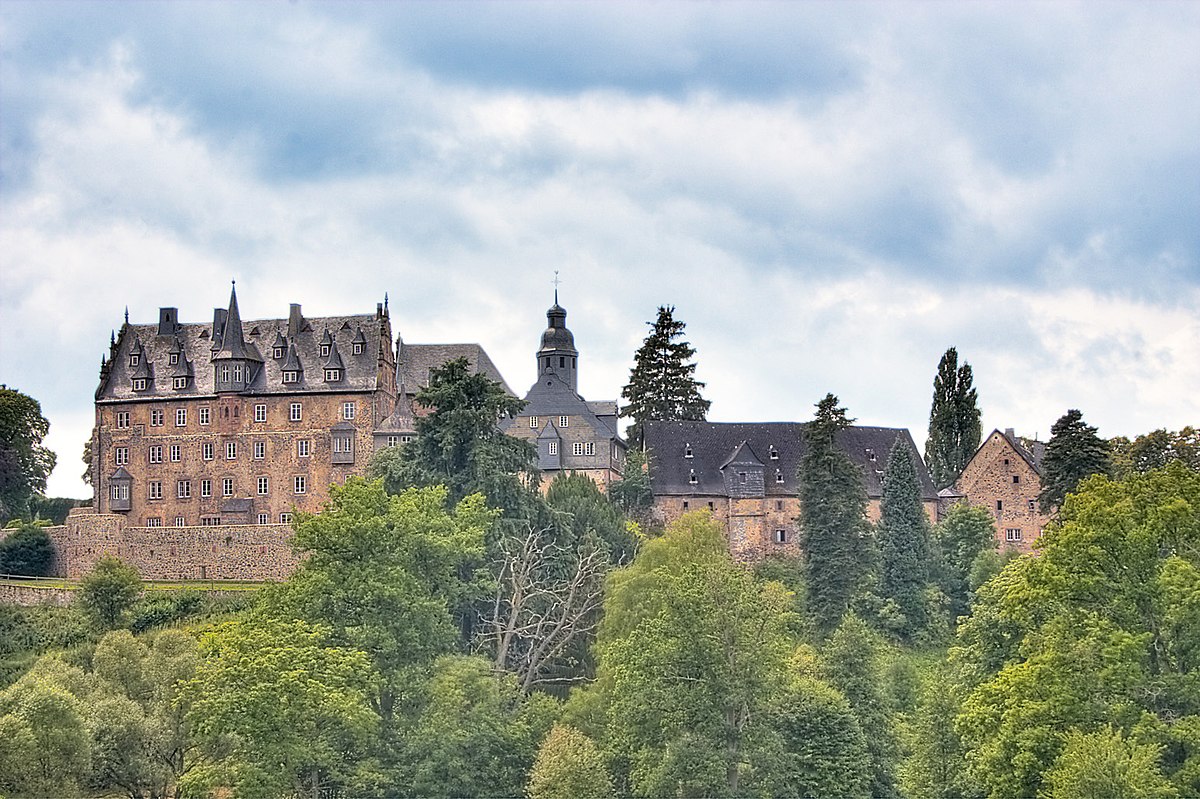 Schloss Eisenbach is a 1217 first mentioned plant, located about three kilometres south of Lauterbach in the Vogelsbergkreis on the northeast edge of the Vogelsberg mountains. The castle is also called the “Wartburg Upper Hesse”.

The castle is located about 1.8 km southeast of the Lauterbacher district of Frischborn Am Eisenbach, a tributary of the Lauter, and about 3.7 km south of the district town of Lauterbach. The volcano cycle path passes at the foot of the resort directly at the expansive Castle Park. From the cycle, section Glauburg-slit You have a good view of the complete system of the castle.

The castle to Eisenbach was presumably built as a road safety castle by the Counts von Ziegenhain Obervögte of the abbey of Fulda around or before 1200 and given to the Knights of Eisenbach to feud. The castle was first mentioned 1217 under Cunradus de Isenbach in the Hanau documents, but then 1269 from the Fulda Abbot Bertho II of Leibolz destroyed in the course of his fight against the robbery Chivalry (Fuldische Stift feud). The feudal knight Eisenbach built it up again within ten years. After the Eisenbacher 1429 were extinct, Hermann Riedesel (the “Golden Knight”) received the fief. The Castle Lords now called themselves Riedesel to Eisenbach. 1432 They were land beautifully hessian Erbmarschälle. At later splits of the Riedesel into different lines, Eisenbach remained a common possession. Two of the lines built the castle in the 16th century into a castle. Due to his key position in the introduction of the Lutheran Reformation, Schloss Eisenbach received the popular nickname “Upper Hessian Wartburg”. Hermann IV Riedesel to Eisenbach had accepted the Lutheran faith by his connection to the Landgrave of Hesse during an encounter with Luther’s reformer, Melanchthon, and thus introduced 1527 in the Junker land of Riedesel the reform. The Riedesel were raised 1680 by Emperor Leopold in the free-standing stand.

The castle in its present form dates back to the 16th century. It consists of a four-wing Kernburg, a farmhouse with a chapel, a barn, a residential building, a gateway and other economic buildings, and two farmhouses (to the west and north-west of the castle). The castle, or today’s castle, occupies a mountain spur in the Lautertal and acted as a dam. In addition to the Ringmauer, the five-storey Bergfried and walls in the Kernburg are preserved from the original castle. At the gate tower, a staircase, is the all-round (Riedesel-Boyneburg) from the end of the 16th century. After Dehio, the tower dates from 1586. Through a gateway from 1557 one enters the courtyard of the Vorburg, which limit the commercial buildings from 1559 to 1587.
Between this and the main castle lies the chapel, a new building from 1671 to 1675 on gothic substructure and with separate living surface. It was the first church building of this area, with a purely Protestant arrangement in the interior, with galleries on three sides and a richly carved altarpiece from 1674, one of the few pulpits of this kind in Oberhessen. It was built by Kaspar Wiedemann in the so-called “cartilaginous or auricle style”. In the niches of the pulpit stand the four evangelists. The crowning conclusion is Christ as Savior of the world. Also worth a visit are the late-Gothic baptismal font as well as the remains of high-quality wall frescoes on the eastern wall dating back to the middle of the 15th century. Behind the moat rises the main castle. The gateway of the early 16th century is flanked by a protruding five-fence tower of the fifteenth century, which originally served as a gate tower with drawbridge and whose gate was moored at the beginning of the 16th century. The one-time gateway in this gate was spanned simultaneously with a rich net vault. On the left, east of today’s gateway, 1595 – partly built into the moat – was a Renaissance building. The small castle courtyard borders on three sides of the building. On the east side is the former palace, in the 16th century substructure, the superstructure with Renaissance gables and stair tower around 1580. On the west side is a residential building with the same construction times; there is a beautiful stone portal on its staircase. The two buildings on the south side are linked by a neo-gothic building by the architect Hugo von Ritgen from the middle of the 19th century.
The inscription in the gatehouse notes: “For 500 years, the Riedesel Freiherrn to Eisenbach Erbmarschalle to Hesse maintain this possession”. The castle can be viewed from the outside.

The Annenkapelle
The extensive castle grounds are open to the public. It was built as a mountain park and has a rich tree population. There is also the Catholic Annenkapelle from 1517 from pre-reformist times directly at the Eisenbach. The builder Hermann IV von Riedesel erected this at the request of his wife Agnes von Hopfgarten. Ten years later he introduced the Reformation in Lauterbach. The Annenkapelle is the only completely preserved late-Gothic building in Lauterbach, providing an insight into the piety of the faithful before the Reformation. The cemetery of the Riedesel family is integrated into the park. In the extended park area stands an oak with a height of 6.85 m (2015).