The New Town Hall (German: Neues Rathaus) is a town hall at the northern part of Marienplatz in Munich, Bavaria, Germany. It hosts the city government including the city council, offices of the mayors and part of the administration. In 1874 the municipality had left the Old Town Hall for its new domicile.

The decision to constructed a new building came due to the lack of space in the Old Town Hall and the small Town Hall on Petersbergl (destroyed in 1944). In memory of the bourgeois high season during the Gothic period, the choice fell upon a neo-gothic design, which allowed an implement an independent architectural accent in contrast to the buildings of the royal family.

The North side of the Marienplatz was chosen as the building site, where the house of the Landstände still stood which had been erected by the Bavarian Duke throughout the Middle Ages as a sort of representation of the opposing Landstände.

The first section of the building in the Eastern part of the Marienplatz, on the corner of Dienerstrasse, was the results of an idea competition won by Georg Hauberrisser and carried out between 1867 and 1874. When it became clear that this new building would not be able to accommodate the entire administration, the city began purchasing all the properties on the Dienerstrasse, Landschaftstrasse and Weinstrasse adjacent to the Town Hall started in 1887. From 1889 to 1892, the section on the corner of Dienerstrasse and Landschaftstrasse was constructed. In 1897, the Magistrate and municipal council decided to extend the buildings on the Marianplatz as well as the Weinstrasse and Landschaftstrasse to create a four-sided complex. For this, the entire area between the Marienplatz and Landschaftstrasse was used and on the other side, between Weinstrasse and Dienerstrasse. In 1898, the work for the extension began with the tower (Rathausturm), also under architect Georg von Hauberrisser. In December 1905, the shell of the third building section was finished with the setting of the keystone on the Rathausturm. For the architectural design of the Munich Rathausturm, Hauberrisser was clearly inspired by the Brussels Rathausturm. The 96-meter late-Gothic Belfry was built by Jan van Ruysbroeck in the years 1449 to 1455.

By the end of 1906, the offices were handed over. The façade area in the Marienplatz was then 98.5 meters long, of which 48 meters belong to the first construction section. Examples that were used for the design were the City Hall in Brussels and the New Town Hall in Vienna.

The minimal damages to the New Town Hall that occurred during the air raids on Munich 1944, was rebuilt after the war. The portion constructed at the Marienplatz received an additional floor, which were hidden behind the neo-gothic balustrade so that the buildings image was preserved. The façade on the Landschaftstrasse was very simply restored. At the end of the 1990s, the New Town Hall was rebuilt and reconstructed identically, including the neo-gothic ornaments, which crown the roof.

The building covers an area of 9159 m2 having 400 rooms. The 100 meters long main facade towards the Marienplatz is richly decorated. It shows the Guelph Duke Henry the Lion, and almost the entire line of the Wittelsbach dynasty in Bavaria and is the largest princely cycle in a German town hall. The central monument in the center of the main facade between the two phases at Marienplatz above the guard house, is an equestrian statue of Prince Regent Luitpold. The bay of the tower contains statues of the first four Bavarian kings.

The main facade is placed toward the plaza, while the back side is adjacent to a small park (Marienhof). The basement is almost completely occupied by a large restaurant called Ratskeller. On the ground floor, some rooms are rented for small businesses. Also located in the ground floor is the major official tourist information.

The first floor hosts a big balcony towards the Marienplatz which is used for large festivals such as football championships or for concerts during the Weihnachtsmarkt. Its main tower has a height of 85 m and is available for visitors with an elevator. On the top thrones the Münchner Kindl. The Rathaus-Glockenspiel, performed by an apparatus daily at 11am, 12pm and 5pm, is a tourist attraction. 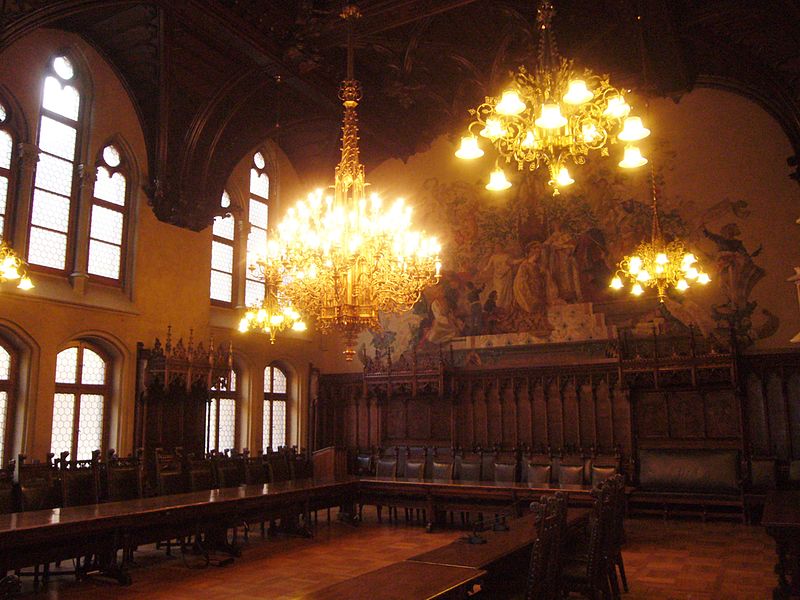 The Old Town Hall (German Altes Rathaus), until 1874 the domicile of the municipality, serves today as a building for representative purposes for the city council in Munich. The Old Town Hall bounds the central square Marienplatz on its east side.

The building, documented for the first time in 1310, had its Grand Hall (Großer Saal) constructed in 1392/1394. The former Talburg Gate (Talburgtor) of the first city wall serves as spire. The Old Town Hall was re-designed in late-gothic style by Jörg von Halsbach 1470-1480. The Grand Hall was decorated by the Morris dancers, created by Erasmus Grasser. After alterations of the facade during the Renaissance and again in the Baroque the building was restored in neo-gothic style 1861-1864. In 1874 the municipality moved to the New Town Hall.

For the passage of increased road traffic the Old Town Hall was tunneled in 1877 with a drive-through and a separate pedestrian’s passage, as well as once again in 1934/35, this time finally destroying the original ground floor. During World War II the building was severely damaged and the spire was reconstructed in 1971-1974. Parts of the neo-Gothic elements, especially the statues of Ludwig the Bavarian (west facade) and Henry the Lion (east facade) and the gable design are preserved.

The Grand Hall was the venue for the speech of Joseph Goebbels on November 9, 1938 which is known as the prelude for the Kristallnacht.