The flag of Denmark (Danish: Dannebrog, pronounced [ˈdanəˌbʁoːˀ]) is red with a white Scandinavian cross that extends to the edges of the flag; the vertical part of the cross is shifted to the hoist side.

A banner with a white-on-red cross is attested as having been used by the kings of Denmark since the 14th century. An origin legend with considerable impact on Danish national historiography connects the introduction of the flag to the Battle of Lyndanisse of 1219. The elongated Nordic cross reflects the use as maritime flag in the 18th century. The flag became popular as national flag in the early 19th century. Its private use was outlawed in 1834, and again permitted in a regulation of 1854. The flag holds the world record of being the oldest continuously used national flag. 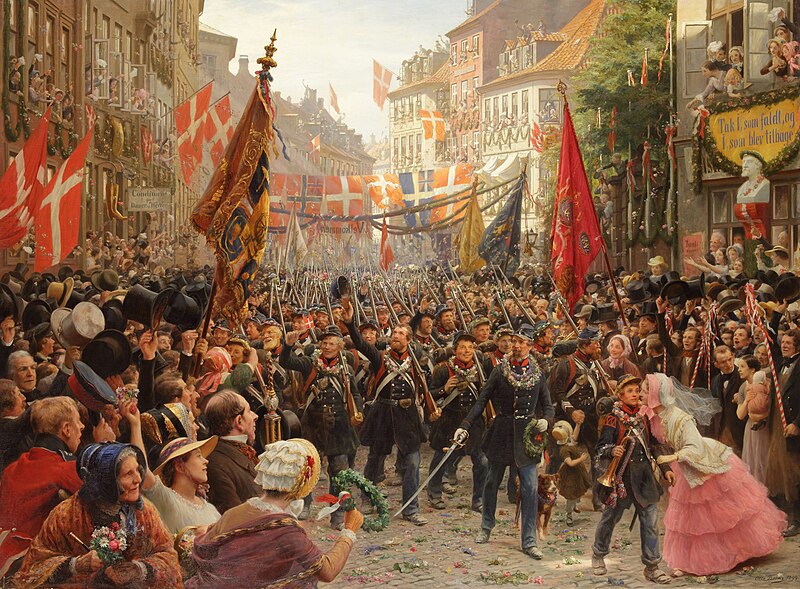 The white-on-red cross emblem originates in the age of the Crusades. In the 12th century, it was also used as war flag by the Holy Roman Empire.

In the Gelre Armorial, dated c. 1340–1370, such a banner is shown alongside the coat of arms of the king of Denmark. (The King of Denmark). This is the earliest known undisputed colour rendering of the Dannebrog. At about the same time, Valdemar IV of Denmark displays a cross in his coat of arms on his Danælog seal (Rettertingsseglet, dated 1356). The image from the Armorial Gelre is nearly identical to an image found in a 15th-century coats of arms book now located in the National Archives of Sweden, (Riksarkivet) The seal of Eric of Pomerania (1398) as king of the Kalmar union displays the arms of Denmark chief dexter, three lions. In this version, the lions are holding a Danebrog banner.

The reason why the kings of Denmark in the 14th century begin displaying the cross banner in their coats of arms is unknown. Caspar Paludan-Müller (1873) suggested that it may reflect a banner sent by the pope to the Danish king in support of the Baltic countries. Adolf Ditlev Jørgensen (1875) identifies the banner as that of the Knights Hospitaller, which order had a presence in Denmark from the later 12th century.

Several coins, seals and images exist, both foreign and domestic, from the 13th to 15th centuries and even earlier, showing heraldic designs similar to Dannebrog, alongside the royal coat of arms (three blue lions on a golden shield.)

A tradition recorded in the 16th century traces the origin of the flag to the campaigns of Valdemar II of Denmark (r. 1202–1241). The oldest of them is in Christiern Pedersen‘s “Danske Krønike“, which is a sequel to Saxo’s Gesta Danorum, written 1520–23. Here, the flag falls from the sky during a Russian campaign of Valdemar’s. Pedersen also states that the very same flag was taken into exile by Eric of Pomerania in 1440.

The second source is the writing of the Franciscan monk Petrus Olai (Peder Olsen) of Roskilde (died c. 1570). This record describes a battle in 1208 near a place called “Felin” during the Estonia campaign of King Valdemar II. The Danes were all but defeated when a lamb-skin banner depicting a white cross falls from the sky and miraculously leads to a Danish victory. In a third account, also by Petrus Olai, in Danmarks Tolv Herligheder (“Twelve Splendours of Denmark”), in splendour number nine, the same story is re-told almost verbatim, with a paragraph inserted correcting the year to 1219. Now, the flag is falling from the sky in the Battle of Lyndanisse, also known as the Battle of Valdemar (Danish: Volmerslaget), near Lyndanisse (Tallinn) in Estonia, of June 15, 1219.

It is this third account that has been the most influential, and some historians have treated it as the primary account taken from a (lost) source dating to the first half of the 15th century.

In Olai’s account, the battle was going badly, and defeat seemed imminent. However the Danish Bishop Anders Sunesen on top of a hill overlooking the battle prayed to God with his arms raised, which meant that the Danes moved closer to victory the more he prayed. When he raised his arms the Danes surged forward and when his arms grew tired and he let them fall, the Estonians turned the Danes back. Attendants rushed forward to raise his arms once again and the Danes surged forward again. At a second he was so tired in his arms that he dropped them and the Danes then lost the advantage and were moving closer to defeat. He needed two soldiers to keep his hands up and when the Danes were about to lose, ‘Dannebrog’ miraculously fell from the sky and the King took it, showed it to the troops and their hearts were filled with courage and the Danes won the battle.

The possible historical nucleus behind this origin legend was extensively discussed by Danish historians in the 19th to 20th centuries. Jørgensen (1875) argues that Bishop Theoderich was the original instigator of the 1218 inquiry from Bishop Albert of Buxhoeveden to King Valdemar II which led to the Danish participation in the Baltic crusades. Jørgensen speculates that Bishop Theoderich might have carried the Knight Hospitaller’s banner in the 1219 battle and that “the enemy thought this was the King’s symbol and mistakenly stormed Bishop Theoderich tent. He claims that the origin of the legend of the falling flag comes from this confusion in the battle.” The Danish church-historian L. P. Fabricius (1934) ascribes the origin to the 1208 Battle of Fellin, not the Battle of Lyndanisse in 1219, based on the earliest source available about the story. Fabricius speculated that it might have been Archbishop Andreas Sunesøn‘s personal ecclesiastical banner or perhaps even the flag of Archbishop Absalon, under whose initiative and supervision several smaller crusades had already been conducted in Estonia. The banner would then already be known in Estonia. Fabricius repeats Jørgensen’s idea about the flag being planted in front of Bishop Theodorik’s tent, which the enemy mistakenly attacks believing it to be the tent of the King. A different theory is briefly discussed by Fabricius and elaborated more by Helge Bruhn (1949). Bruhn interprets the story in the context of the widespread tradition of the miraculous appearance of crosses in the sky in Christian legend, specifically comparing such an event attributed to a battle of 10 September 1217 near Alcazar, where it is said that a golden cross on white appeared in the sky, to bring victory to the Christians.

In Swedish national historiography of the 18th century, there is a tale paralleling the Danish legend, in which a golden cross appears in the blue sky during a Swedish battle in Finland in 1157.