Schloss Oberwerries is a two wing water castle in the Lippeauen (river) of the Hammer borough of Hamm-Heessen in North Rhine-Westphalia, Germany. It comprises several buildings, which have grown up over the centuries to the present castle complex. 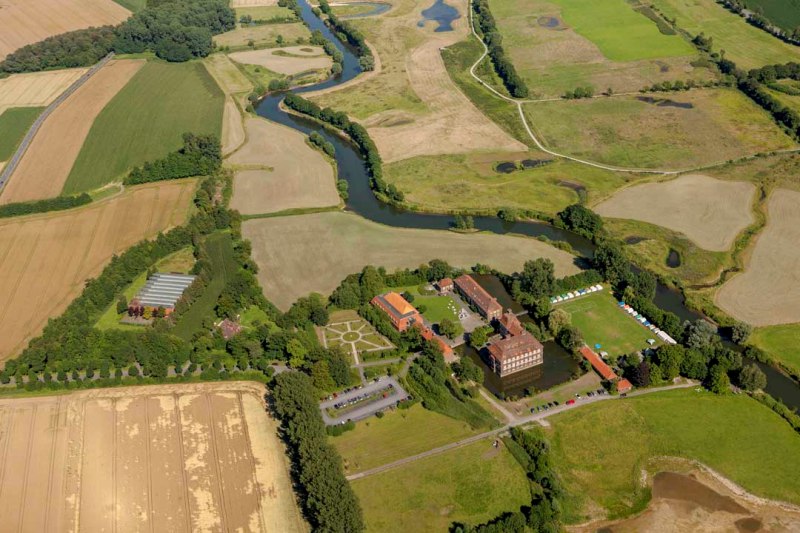 The brick masonry consists of a two-manor house, which is located east of a stables.
To the north of the manor is a gatehouse, which joins a small baroque garden in the north.

The manor house consists of a main building with two storeys and a two-storey wing that is connected to the south, but is narrower and slightly lower than the main one.
The wing east is a square pavilion tower.
The three building elements of the manor House have belt cornices and window mounts made of tree-wood sandstone as a common architectural element. However, their roof shapes are partly different. While the main house and the Pavilion Tower have a roof, the wing is completed by a kinked pitched.
Both the main house and the southern wing of the manor House have a separate entrance, but they are both accessible via a common free-stair system.

The gatehouse is the oldest part of the plant, with its iron wall anchors with the year 1667 witnesses. Inside the building there is a fireplace from the year 1672. Due to a bricked, but still visible, Gothic Spitz headed, which was part of the former Castle chapel, however, building historians assume that the gate is older and that 1667 it was only renewed and rebuilt.

To the east of the manor stands the so-called stables, which is the youngest building of the castle. It is a long-stretched rectangular structure with window framings made of tree-wood sandstone, on the eastern side of which a former dog barn borders.

Already in 1284 a castle is mentioned as the predecessor of the present castle in the feudal register of the Counts of Limburg-Styrum.