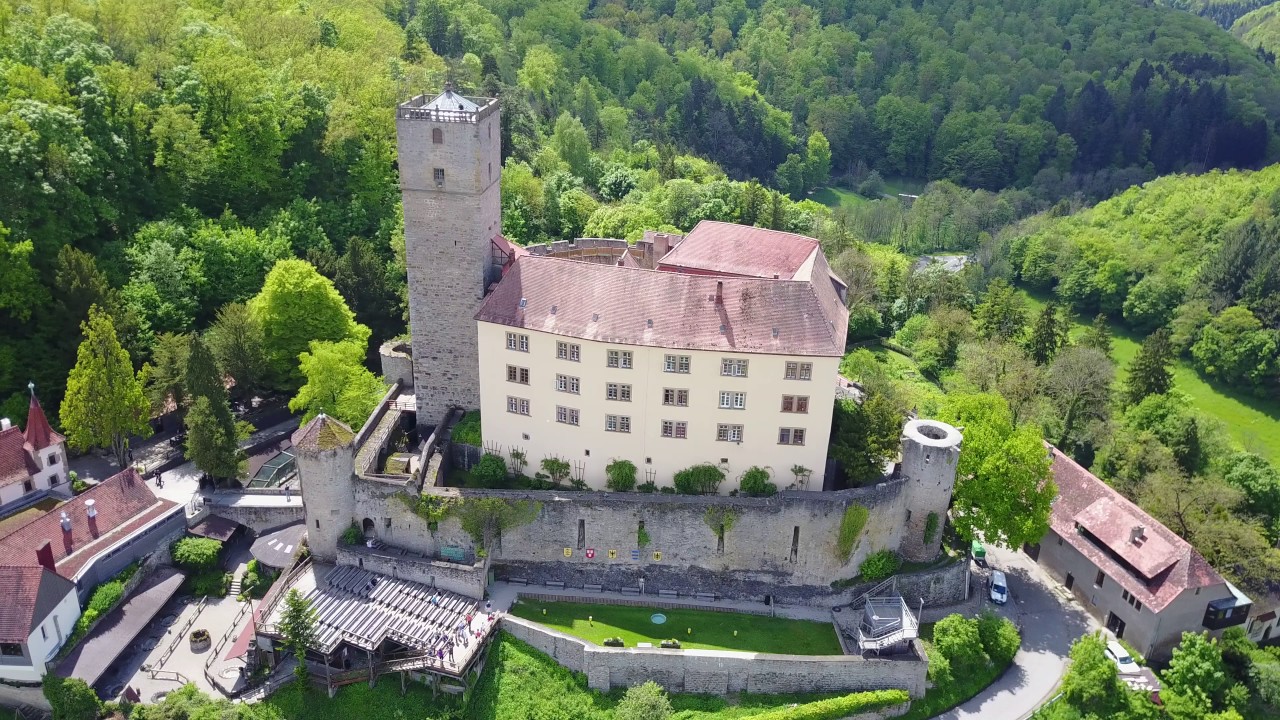 The Castle Guttenberg is a late medieval castle over the Neckar Mühlbach, a district of Hassmersheim in the Neckar-Odenwald-Kreis in Baden-Württemberg. The castle has never been destroyed and has been continuously inhabited for almost 800 years, since the middle of the 15th century by the line Gemmingen-Guttenberg of the Barons of Gemmingen. The complex includes the German Greifenwarte as well as a castle museum and a restaurant.

On the west of the castle through the Precastle road, there are buildings from the 15th to the 17th century. The long, two-storey quarry stone building from the 15th century is the principal building. The subsequent low construction, partly made up of trusses, directs the view to the gate with the two towers, the entrance gate to the castle in ancient times. The path at the castle Chapel is still passing through the valley. The Spitz arched, secured by a Wurferker gate, dates back to the second half of the 15th century and was closed by two wooden revolving wings. Also the opposite second gate, through which you reach the castle today, had its wings on the side of the castle. The castle behind its wall was therefore lockable for itself and did not serve the protection of the castle. The wall surrounding the castle was only opened in modern times because of the driveway on both sides.
On the way to the main gate of the castle impress the mighty Shield wall and the 40 m high donjon. They lie behind the kennel wall with their late Gothic circular bogenfries, which encloses the entire castle. In front of a non-visible, older kennel wall – probably from the 13th century – it was built with its five round towers in the second half of the 15th century, thus already among the Lords of Gemmingen. The shield wall of rubble stone masonry, a section in the old wall, renewed in the 14th century, was increased at different intervals.
The donjon comes from the second quarter of the 13th century in its basement of coarsely carved mogul blocks. From the weir over the shield wall you can reach the entrance floor via a short staircase. The room with an abort niche and the traces of a chimney was livable for a gate. The above Weir floor has all four side windows with lockable openings for a small gun. The two unused floors below the entrance floor had no other function than to raise the tower during the construction period. This dungeon also never served as a dungeon. The donjon with its high entrance was not a sanctuary in the defense case, but it was the observation place for the Castle guard. The two storeys above the cornice were set up in the late 15th century, after the passage of the castle to the Lords of Gemmingen.
The stone bridge leading to the main gate over the neck ditch, which carries the year 1572, originally ended a few meters in front of the gate and was lengthened by the drawbridge that had disappeared today. The little fortified main gate is an installation from the late 16th century into the outer wall of the 15th century. The second gate was added in the 15th century to the older kennel wall, which was still visible at this point. The narrow courtyard is bordered in the south by the Shield wall, in the east and west by the residential buildings.
Soon after 1449, a four-storey residential building was created behind the Western Wall. This building, preserved in its exterior walls, was modernized in the 16th century and received 1741 a baroque portal. In this state, the former residential building, in which the Castle Museum is now housed, is still present.
At the place of a smaller predecessor, presumably from the 14th century, the new eastern residential building was built in the 16th century. The masonry of the building, which was modernized in the Baroque period, comes partly from these old buildings. In the 18th century, a new wing was added to the building with the Baroque staircase of 1776. In the late 18th century also belongs the stone balustrade, which surrounds the roof of the donjon. Since that time, the Castle Lords used the donjon as a representative lookout tower with a view over the Neckar to the castle of Hornberg and the castle of Horneck. Constantly modernized, the medieval castle with its donjon from the Hohenstaufen period is still today a center of the widely branched family of the castle. 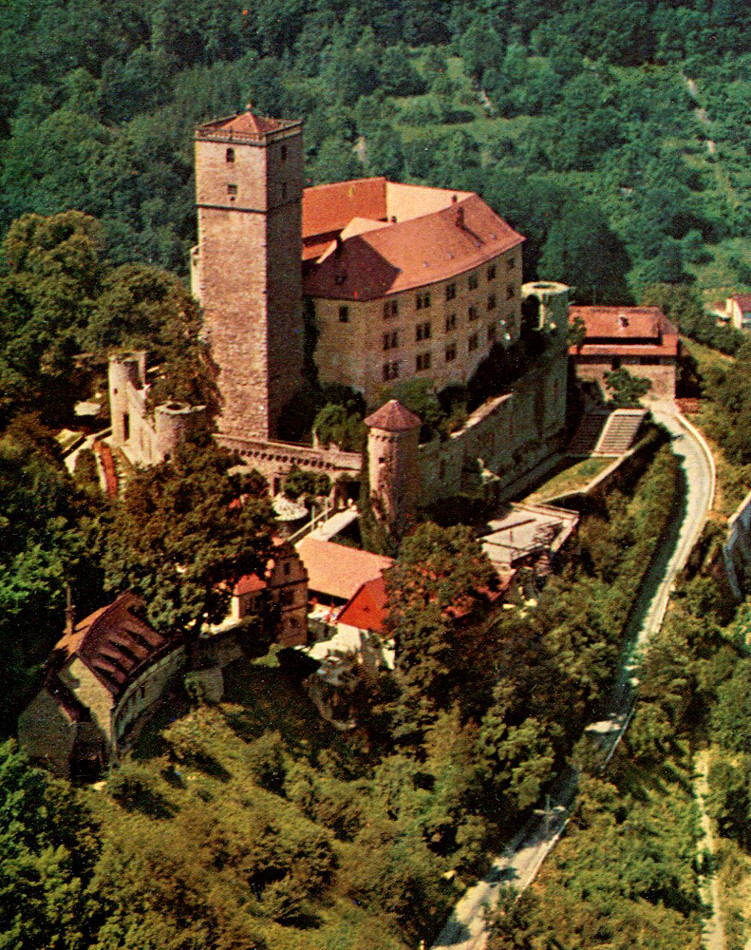 While the private rooms of the castle’s owners are located in the eastern residential building, the Castle Museum is housed in the west. Here the visitor is given explanations of the knights and medieval jurisdiction. He sees among many other exhibits the famous Guttenberger Wood Library of Carl von Hinterlang from the years around 1790 and the two late Gothic altar altarpiece, which stood for many centuries on the side altars of the castle chapel.
The donjon can be climbed during the opening hours of the museum and offers a wonderful view over the Neckar.
The castle Guttenberg is well known for the accommodation of the German Greifenwarte, which attracts many visitors with its flight demonstrations. The aviaries are situated in the kennel and in the former Castle Garden on the valley side of the castle lies the open-air area with the stage. Outside the castle, in front of the main gate, the Castle Tavern is run in a side building.