The Dresden Frauenkirche (German: Dresdner Frauenkirche, IPA: [ˈfʁaʊənˌkɪʁçə], Church of Our Lady) is a Lutheran church in Dresden, the capital of the German state of Saxony. An earlier church building was Roman Catholic until it became Protestant during the Reformation, and was replaced in the 18th century by a larger Baroque Lutheran building. It is considered an outstanding example of Protestant sacred architecture, featuring one of the largest domes in Europe. It now also serves as a symbol of reconciliation between former warring enemies.

Built in the 18th century, the church was destroyed in the bombing of Dresden during World War II. The remaining ruins were left for 50 years as a war memorial, following decisions of local East German leaders. The church was rebuilt after the reunification of Germany, starting in 1994. The reconstruction of its exterior was completed in 2004, and the interior in 2005. The church was reconsecrated on 30 October 2005 with festive services lasting through the Protestant observance of Reformation Day on 31 October. The surrounding Neumarkt square with its many valuable baroque buildings was also reconstructed in 2004. 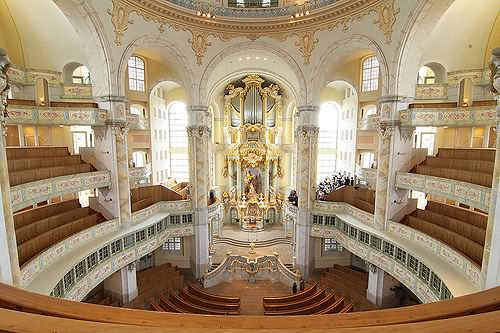 The Frauenkirche is often called a cathedral, but it is not the seat of a bishop; the church of the Landesbischof of the Evangelical-Lutheran Church of Saxony is the Church of the Cross. Once a month, an Anglican Evensong is held in English, by clergy from St. George’s Anglican Church, Berlin.