The Schloss Adolfsburg, also Adolphsburg, is a moated castle in the Hundemtal at the entrance of the village of Kirchhundem in North Rhine-Westphalia, Germany.

Schloss Adolfsburg leads it name back to the builder Johann Adolf von Fürstenberg, who built it in the 1670s. It is a Baroque water castle, which was intended for the client mainly as a recreational and old-age seat. Johann Adolf von Fürstenberg, a scion of the family, which had been part of the offices of Bilstein and Waldenburg since the 16th century, belonged to the spiritual state. He was a member of the chapter of Münster as well as canon and provost to the Holy Cross in Hildesheim. It is believed that he entrusted the Capuchin brother and architect Ambrosius von Oelde with the planning of the Adolfsburg.
Two chimneys in the Knight’s Hall and an alabaster bust of Johann Adolf von Fürstenberg are works of the sculptor Johann Mauritz Groeninger. Presumably the former baroque equipment of the knight Eels also goes back to the designs of groeningers. 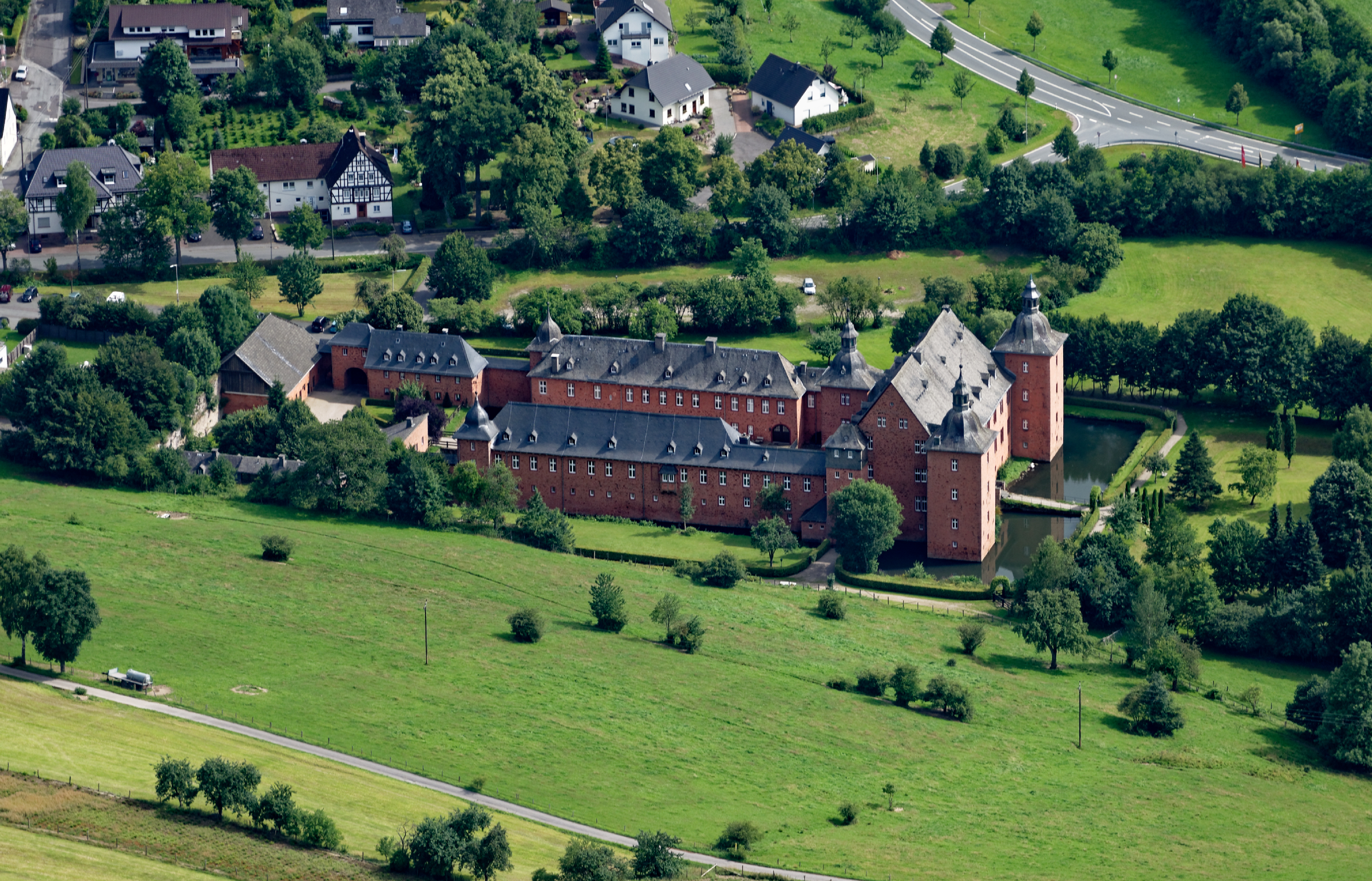 By Diploma of 20 February 1676, Emperor Leopold I raised the castle to the Noble Manor. Johann Adolf von Fürstenberg operated in and around the top-dog intensive land acquisition and Areable thus his possession there.
After Johann Adolf, who from 1679 until his death 1704 had his permanent residence in Schloss Adolfsburg, there were two more generations of the family of Fürstenberg, namely Clemens Lothar (1725 – 1791) with his family from 1758 until the end of the 1780s and the 1766 there was born Friedrich Leopold from 1819 until his death 1835.

Later generations of the family of Fürstenberg took their headquarters in Schloss Herd rings near Arnsberg. For this reason, the Adolfsburg only fulfilled the function of a hunting lodge. In order to bring the building back to continuous use, it was rented out to the missionaries of the Holy Family in 1919, who built their first mission school on German soil. 1940 came to the closure of the school by the National Socialist Party. During the Second World War, evacuated Adolfsburg were housed. In addition, parts of the collection of the Düsseldorf City Museum were deposited here for safety reasons. It was only 1946 that the missionary school was able to resume its operation with ten students at first. Since the order and the school were drafted into the 1956 monastery and high School of Maria Queen in Altenhundem, Schloss Adolfsburg was empty for several decades and was threatened by decay.
After years of intensive efforts to preserve the building, the middle of the 1980s was able to find an investor who was ready to restore the castle and to use it appropriately. On 7 March 1985 the Adolfsburg was listed as a monument in the list of monuments of the municipality of Kirchhundem.