Brandenstein is a district of Möckern in the district of Jerichower Land in Saxony-Anhalt.
Brandenstein is very rural and quiet. Surrounded mainly by forest, the landscape opens only north to the Fiener Bruch. To get to the small town of Möckern, you have to travel 25 km over various side roads in southwest or south direction. 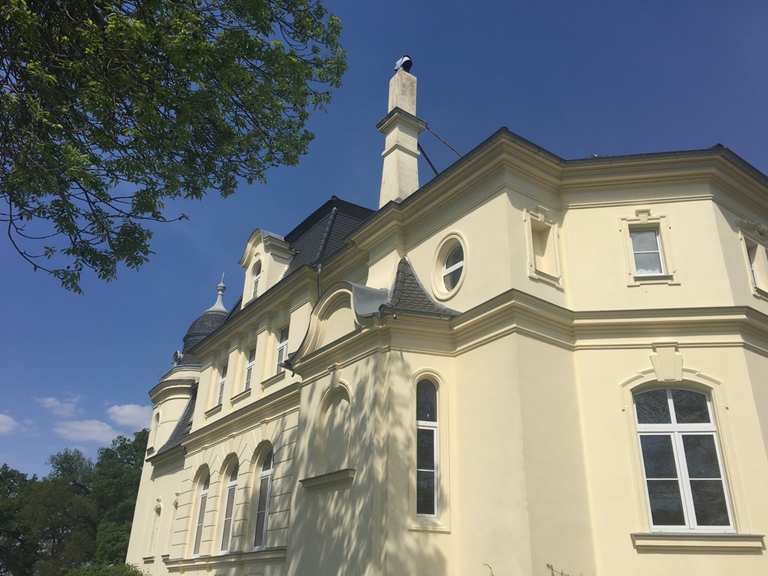 The small town, surrounded by forest, meadow and field, is located in the 25,063 hectare and very wooded landscape conservation area (LSG) Möckern-Magedeburgerforth. The northern edge of the LSG is just a few hundred meters north of here. The area extends in a southerly direction to the approximately 18 km (as the crow flies) south-west town Möckern. The entire area of the local LSG is part of the Burg-Ziesar Vorflming and belongs to the Fläming.
The western foothills of Vorläming reach a height of around 60 meters in the surroundings of Brandenstein. The glacial ridge, which runs from southeast to northwest, is about five kilometers west of the village its end at Hohenseeden. At the western edge of this place, the terrain falls abruptly into the glacial valley of the Elbe. From there to the other end of the Fläming in the southeast, there are over 100 km to the river Dahme in Brandenburg.
–
Von Brandenstein is known to have been mentioned in 1362 as “Ghezerik” and in 1459 as “Jeserigk” and in this period was in the possession of a family of Krussow. The history of Brandenstein is closely linked to the von Arnim family. In 1507 Lippold I von Arnim decided to sell his possessions in Zehdenick in Brandenburg to found a new family empire in the Archdiocese of Magdeburg. In addition to the goods in Hohenseeden, Krüssau and Theeßen he acquired on 29 May 1507, the estate Brandenstein as a fief.
After 1680, the territorial rule of the archbishopric was transferred to the Brandenburg duchy of Magdeburg, the place was assigned to the new Jerichower Gesamtkreis. This was, now under Prussian rule, in 1785 divided into two districts. Brandenstein came to the district Jerichow II. From 1807 belonged to the place, during the Westphalian intermediate rule in Magdeburg for Kurmark and after the end of the wars of liberation to the district Jerichow II of the administrative district Magdeburg of the Prussian province of Saxony. 1928, the previously independent estate districts were dissolved and incorporated. This also affected Brandenstein, who came to Krüssau. The von Arnim family has remained the lord of the estate in Brandenstein until the present day, where it mainly deals with forestry. Only in the years from 1945 to 1992 was the estate, after its expropriation by the Soviet occupying power, in foreign hands. The manor Brandenstein served during this time as a state orphanage. In the wake of the GDR administrative reform in 1952 it was renamed the circle in county Genthin. In 1994, the district Genthin was merged with the district castle to the new district Jerichower country.
In 1910 Brandenstein had 117 inhabitants. In 1939 both merged places had 351, 1964 453 inhabitants.
In 1992, Bernd von Arnim bought back the manor house Brandenstein and the 1250 hectare Brandensteiner Forst from the district. In the mansion, which was extensively renovated, he set up the forestry administration, which has since been one of the largest employers in the region. In 2007, the family celebrated in the village with great public participation “500 years Arnims in Brandenstein”.
Until the incorporation on 1 January 2010, the village was a district of the municipality Krüssau, today also a district of the city Möckern.