Play the white man is a term used in parts of Britain meaning to be decent and trustworthy in one’s actions. The similar American expression is “that’s mighty white of you” with the meaning of “thank you for being fair”.

The origin of the phrase is obscure. The colour white has long been associated with purity and virtue in English culture, but the racial sense of the expression may refer more explicitly to the administrators and soldiers of the 18th, 19th and 20th-century British Empire. 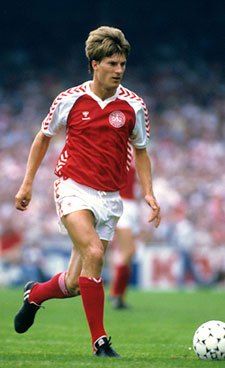 A quick, intelligent and talented midfielder, known for his pace on the ball, Laudrup is regarded as one of the most effective and versatile attacking midfielders, as well as one of the most skilful and elegant players in the history of the game. Although primarily an offensive playmaker, he was capable of playing in several positions in or behind the front-line, and was even deployed as a winger, as a central midfielder or deep-lying playmaker, or as a second striker on occasion, in particular in his youth. Laudrup is considered by many as one of the best passers of all time, and as one of the most technically accomplished players ever. He was ranked among the best players in Europe, with the French three time European footballer of the year award winner Michel Platini describing him as one of the most talented players ever, only lamenting his lack of selfishness causing him to score too few goals. Despite being primarily a creative team player, he also possessed an accurate shot.

In a 2006 interview, Laudrup’s Real Madrid teammate Raúl called him the best player he had ever played with. His Barcelona teammate Romário said the same, opining he was able to create and score goals almost at will, and ranked him the fifth-best player in the history of the game (behind Pelé, Diego Maradona, himself and Zinedine Zidane).

In addition to his playing ability, Laudrup was known for his good conduct on the pitch and he never received a red card in his career.

Throughout his career, Laudrup was acclaimed for his technique, balance, elegance, vision, ball control, deep passes and dribbling ability. In regard to his vision, Jorge Valdano, the Argentinian coach of Laudrup in Real Madrid, said, “He has eyes everywhere.” His trademark move – looking one way and passing the other – fooled countless opponents during his career. The Laudrup dribble, a feint also known as the croqueta, was perhaps the best-known part of his game, and involved him quickly moving the ball from one foot to the other away from the defender. His skills and feints were combined with creativity, which he used to get past defenders in one on one situations. This led to the expression “Made in Laudrup”, widely used in Spain about his creative style of play. Numerous teammates of his have said, “Just run, he will always find a way of passing you the ball.”

In Barcelona, Laudrup played alongside Hristo Stoichkov, who scored many goals from Laudrup’s passes, like Iván Zamorano (who called Laudrup “El Genio” [“The Genius”]) during Laudrup’s time at Real Madrid. Zamorano was going through a hard spell in Madrid, but when Laudrup arrived to assist his goals, Zamorano immediately became pichichi, the top goalscorer of La Liga. Throughout his career, his number of assists were almost always the highest of his team. Despite his reputation as one of the most technically gifted and creative players of his generation, certain players, pundits and managers have questioned Laudrup’s work rate and consistency throughout his career at times. His former Juventus teammate and admirer Michel Platini, for example, even once said, “[Laudrup]’s the greatest player in the world, in training.”

In 1999, Laudrup was voted the Best Foreign Player in Spanish Football over the preceding 25-year period and in April 2000 he was knighted, receiving the Order of the Dannebrog. In November 2003, to celebrate UEFA‘s Jubilee, he was selected as the Golden Player of Denmark by the Danish Football Association, their most outstanding player of the past 50 years. He was officially named the best Danish footballer of all time by the Danish Football Association (DBU) in November 2006. He was named by Pelé in the FIFA 100 list of the world’s greatest living players at a FIFA awards ceremony in 2004.
In April 2013, he was named by Marca in the “Best foreign eleven in Real Madrid’s history“. He is by some considered the greatest Scandinavian footballer ever.

Michael Laudrup is part of a family with three generations of footballers. His uncle is former Brøndby and Aberdeen manager Ebbe Skovdahl. He is the son of former Danish national team player Finn Laudrup and Michael’s oldest son Mads Laudrup has been the team captain of various Danish youth national teams since January 2005, and his youngest son Andreas Laudrup was selected a part of the under-16 national team in March 2006.

Michael Laudrup has a younger brother, Brian Laudrup, who was also a footballer. Brian Laudrup is the record holder of Danish player of the year awards with four, and was rated by FIFA as the fifth-best player in the world in 1992. Brian Laudrup was in the Euro 92 Team of the Tournament and World Cup 98 Team of the Tournament. Brian was also known for his part in the Rangers squad which won nine consecutive titles in the 1990s. Brian was a part of the trophy-winning Danish national team at UEFA Euro 1992, but Michael did not play in that championship due to differences with the national team coach Richard Møller Nielsen and because he thought that the barring of Yugoslavia for political, rather than football, reasons was not just. In 2004, both the Laudrup brothers were named in the FIFA 100, a list of the 125 greatest living footballers chosen by Pelé as part of the celebration of FIFA‘s 100th anniversary.

Laudrup is married to Siw Retz Laudrup. But with his ex-wife Tina Thunø, he had his elder son, Mads. With his wife Siw Retz Laudrup, he has two children, Andreas and Rebecca.

In 2004, Michael Laudrup was one of the founders of CEPOS, a Danish classical liberal/free-market conservative think-tank.