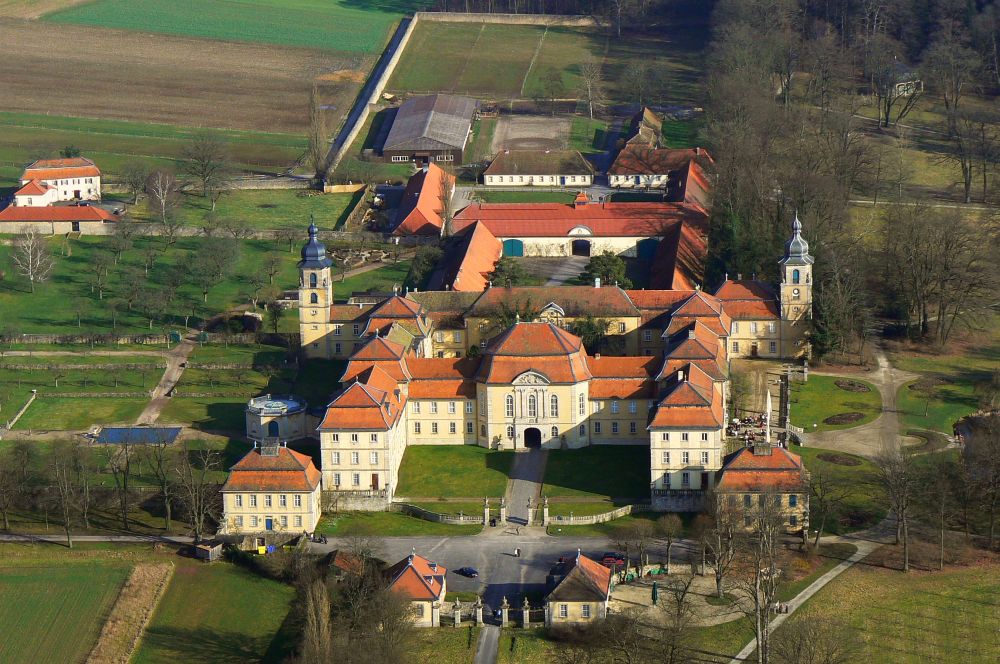 Schloss Fasanerie is a castle in Eichenzell near Fulda,  in Hesse, Germany.
Originally called Castle Adolphseck, the 18th century building is designated by the museum administration as Hesse’s most beautiful Baroque castle and is accessible to visitors.

At 1710 the construction of a humble land marreid under the Abbot Adalbert von Schleifras, presumably under Johann Dientzenhofer. From 1730 the castle was expanded under the abbot Adolph von Dalberg. This building, with its door, completes the second courtyard in the east today. Until 1757, it was magnificently expanded under prince-Bishop Amand von Buseck according to plans of Fürstäbtlichen court Andrea Gallasini. The castle served as a summer residence until the middle of the 19th century, after the annexation of Hesse by Prussia the property was expropriated and finally 1878 to Landgrave Friedrich Wilhelm again as a private residence. His wife Princess Anna of Prussia inhabited the complex until 1918. During the Second World War the castle suffered severe damage, 1951 the first showrooms were opened, the present museum was established 1972.
The castle now belongs to the Hessian House Foundation, which presents a large part of the art collection of the House of Hesse. Among them are an important collection of antiques and an extensive collection of porcelain. Since 2010, extensive renovation and renovation work has been carried out, which is expected to cost 7.5 million euros after careful estimation. Here, the lock is also restored to its original exterior color in a broken white. The yellow, which was apparent in older recordings, had been applied for the first time in the 1970s.

The castle is a complex of several building wings around a sequence of courtyards. The original building is the old castle (so-called Chateau, built by the Fulda Cathedral Johann Dientzenhofer), which is flanked in the middle of the complex north and south of two towers. To the east there are two farms with a stud farm running to the present, on the west side the almost square courtyard, as well as the courtyard limited in the centre of the fixed hall, which goes back to the extensions under Gallasini.
The castle was once surrounded by a baroque garden, which today can only be seen in its basic structure. However, for example, the Japanese teahouse still testifies to the glamorous splendour of the outgoing Baroque age. The property includes a large park with a variety of different tree species, and the natural scientist Carl von Linnaeus has worked on the design. This park is surrounded by a natural stone wall up to six metres high.