Burg Adendorf is a castle on the southern edge of Adendorf, a district of Wachtberg in North Rhine-Westphalia, Germany. Nearby are the castle Munchausen and the castle Gudenau.
Although the name suggests otherwise, Adendorf is not a castle, but a water castle, which is why the name Schloss Adendorf is also used for the plant. It is listed as a historical monument and is one of the best preserved water castle buildings in the Rhein-Sieg district.
The plant was first mentioned in 1337 and developed over the years from a two-leaf angular construction to a closed four-wing system, which after its conversion to a castle has hardly been changed and thus its appearance of the 17th century. Century has largely preserved. Since 1826, it is the property of the Barons of Loë, who, by arrangement, offer guided tours for groups.

Adendorf Castle is a two-part complex consisting of a castellated mansion and a forecourt south-east of it, which stand on a common island with a rectangular shape.

The wide moat surrounding the island is framed by a wall and pond-like around the mansion. It is fed by the mill creek. In addition to extensive forest and agricultural areas, the estate includes a landscaped castle park with mature trees. The remains of a formal garden, which can still be recognized in its basic concept, are integrated into it. It is located outside the moat north of the castle building.

The main building is a four-winged plaster construction whose wings are grouped around a nearly square courtyard. The floor plan goes back to a 14th century castle.
The two and a half brick floors of the building rise above a high basement made of quarry stone and are completed by steep pitched roofs with small dormers and schist cover. The design of the building is reminiscent of Dutch models, but perhaps also Italian villas in the style of Mannerism served the lords of the castle as a model, because sons of the von der Leyen family spent several years studying in northern Italian cities.
The building has rectangular windows with natural stone walls and Hausteinbänder as cornices. On the north ceiling is a massive, three-storey round tower with slate-roofed conical roof. Like the stable of the outer bailey, it has small, round windows on the ground floor, while the two upper storeys have transverse windows. The tower is still from the medieval plant. In it was formerly a courtroom and the dungeon.
The remainder of the manor house is occupied by polygonal turrets that rest on console-like projections in the form of overturned cones. It`s steep, octagonal helmets are slated. The tower corners and window surrounds consist of Haustein.
The eight-axle main facade of the building is located on the southeast side and points to the outer bailey. In its fifth axis, the rusticated portal is a bit lower than the ground floor. A double-flighted staircase with a curved shape leads up to it. It is crowned by a flat triangular gable whose gable triangle shows the coat of arms of the von der Leyen family. Behind the portal is a gatehouse with two groined vaults separated by arches.
The gate hall leads the visitor to the courtyard in the style of the Italian Renaissance. Above the archway, on the courtyard side, is the alliance coat of arms of the Leyen and Quadt families. Many windows facing the courtyard are crowned by volute gables.
The volute gable of a door in the northwest wing shows the year 1659.
In addition to a wooden staircase from the late Middle Ages in the great hall, a Renaissance chimney with numerous coats of arms can be found on valuable interior fittings. He came to Adendorf around 1900 from Konradsheim Castle, which was also owned by the von Loë family, and displays the coats of arms of the following noble families: Waldbott, Schall, Bernsau, Haeß, Wachtendonk, Loë, Schinck and Nesselrode. 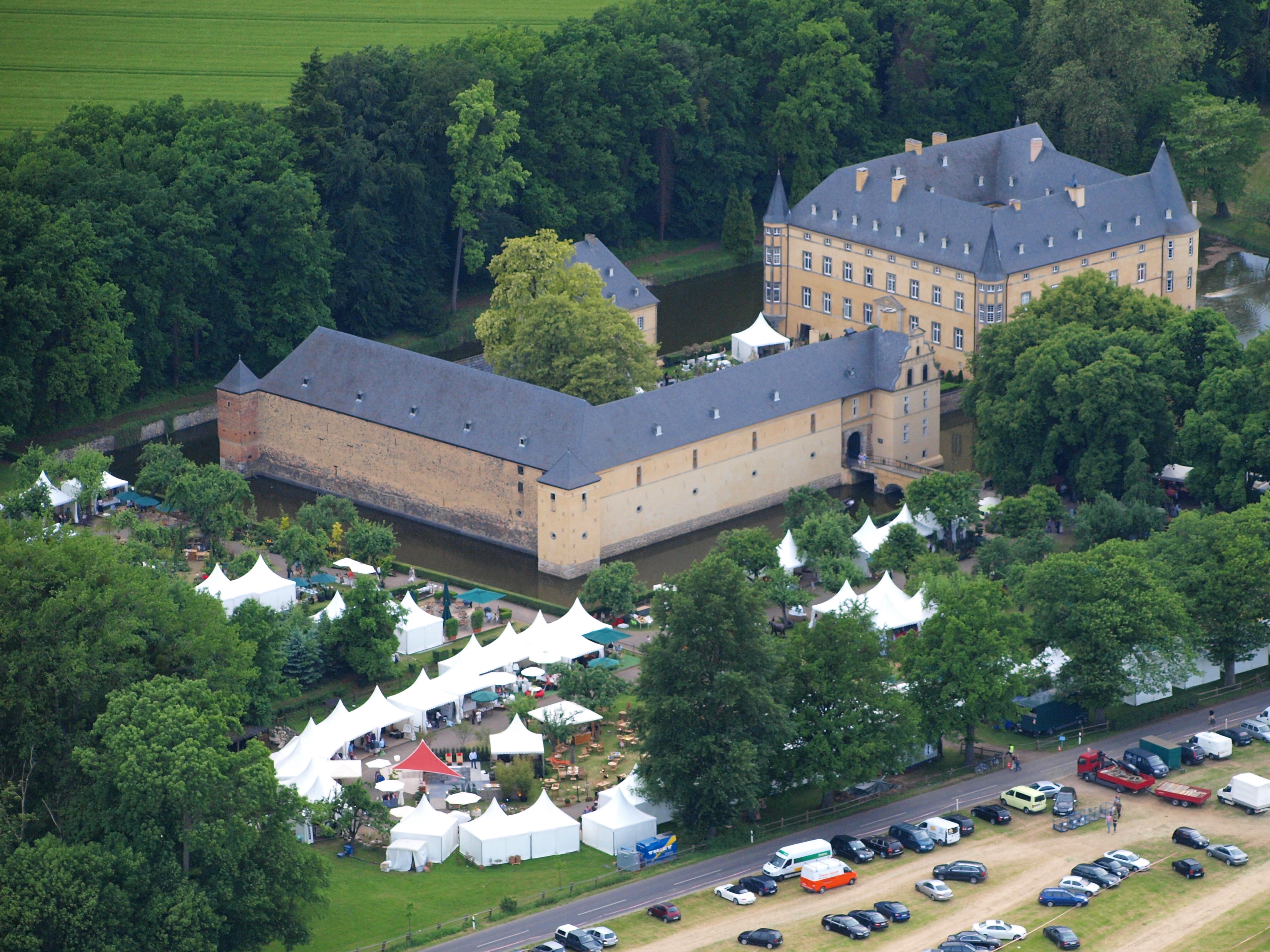 The municipality was formed 1969 as a merger of 13 now incorporated villages. The town-hall is in the village of Berkum, approximately in the center of the area. The Rodderberg mountain is in the east of the Wachtberg district.

The municipality is named after another volcanic mountain, the Wachtberg, (extinct for 25 million years, now with a height of 258 m) that is situated near the centre of the municipality.