The “Wasserburg” Castle Metternich (Merle Castle) was built at the latest in the 13th century. In 1316, for the first time, a gender was mentioned that bore the name Metternich and used as a coat of arms the lion.
Metternich is a village in the municipality Weilerswist in the district of Euskirchen in the extreme south of North Rhine-Westphalia and is located on the southwestern slope of the Ville.

The castle went to fief by the Archbishop of Cologne, was on record in 1348 on the occasion of an inheritance between four brothers and remained until 1692 in this family. In 1692, the last Baron von und zu Metternich, who lived there, sold the castle and the estate to the Privy Councilor and State Secretary Franz Wilhelm von Schönheim. 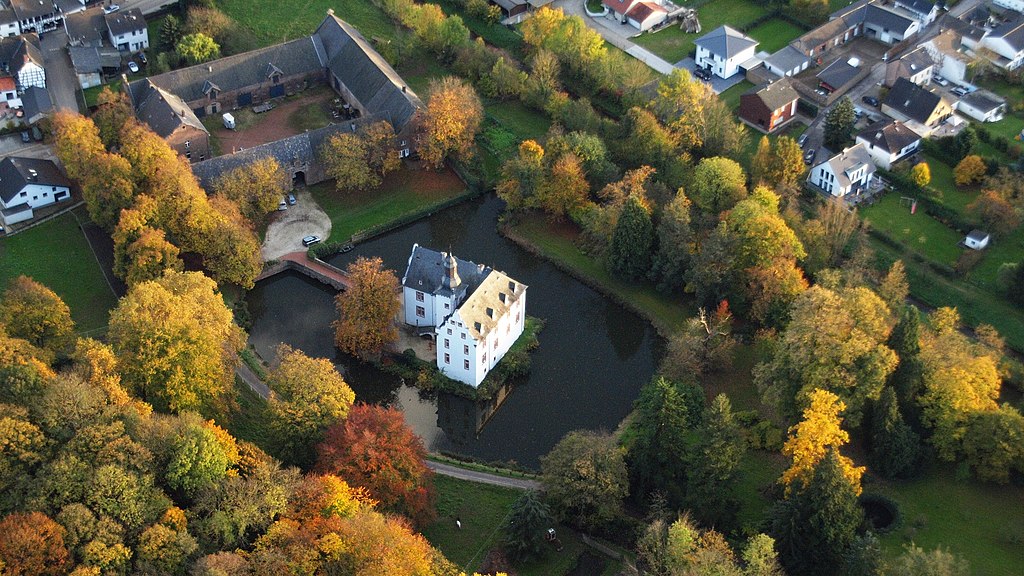 After the death of the last Schoenheim of Metternich, canon Johann Arnold von Schönheim inherited his cousins, the art-loving Cologne suffragan bishop and diocese administrator Clemens August von Merle and his brother Josef Clemens von Merle. On the latter, the plant of the landscape park in 1802 goes back to the castle (court gardener Josef Clemens Wehye). The later royal court gardener Lenné received his first training there, the landscaped park is still preserved at the castle, on the Villehang but mostly become forest. About the important Rhenish-French jurist Heinrich Gottfried Wilhelm Daniels, the translator of the Code civil into German and later the first president of the Cologne Appellhof, who bought the estate of the Cologne noble family from and to Pütz in 1811, the manor came after his death by sale the major a. D. Karl Friedrich von Müller and his wife Helene b. Krupp from Essen, whose son bought it in 1879 Franz Freiherr von Schorlemer-Overhagen, he rebuilt the mansard and the manor. He sold Metternich in 1895 to the royal chamberlain Edmund Freiherr Spies von Büllesheim, whose family lives in the castle to this day. While the mansion of Castle Metternich could be extensively renovated after very severe war damage and incipient decay, nothing is left of the original bailey. The present four-wing manor was completely rebuilt in 1885, only the large sandstone gate was taken over from the previous buildings. Nothing has survived of the decoration and the collection of paintings of Bishop Merle, only a plan of hanging. The forecourt ditches are mostly leveled, but the mansion is still surrounded by a large pond, which keeps the pile under the foundations constantly under water. In the west and south, however, the castle is still protected by three water hazards, including the Swist. At the beginning of the 19th century, the social contract of Friedrich Krupp zu Essen was closed at Metternich Castle.