Bushmeat, wildmeat, or game meat is meat from non-domesticated mammals, reptiles, amphibians and birds hunted for food in tropical forests. Commercial harvesting and the trade of wildlife is considered a threat to biodiversity.

Bushmeat also provides a route for a number of serious tropical diseases to spread to humans from their animal hosts [HIV?]. Bushmeat is used for sustenance in remote areas, while in major towns and cities in bushmeat eating societies it is treated as a delicacy. 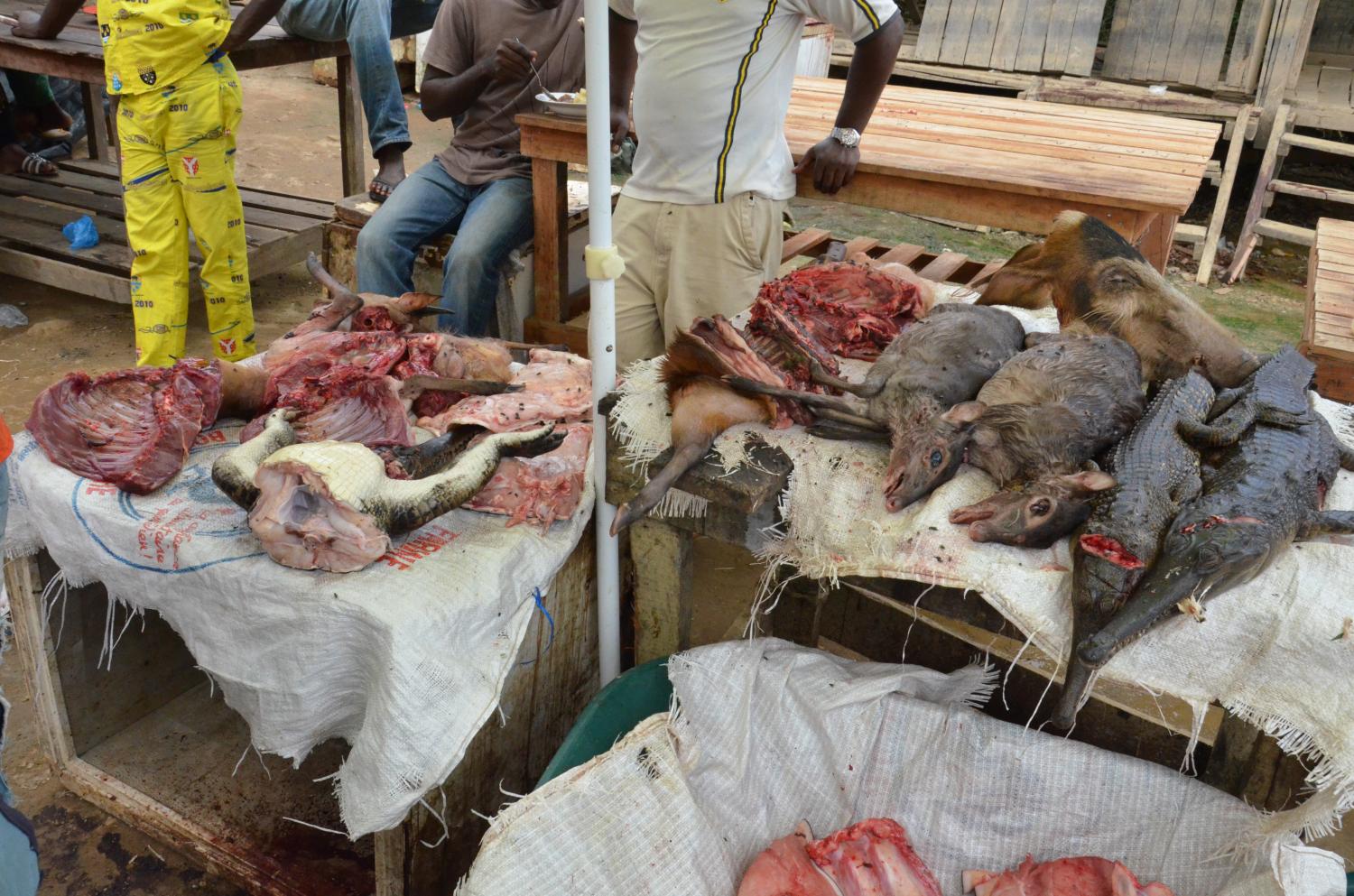 Today the term bushmeat is commonly used for meat of terrestrial wild or feral mammals, killed for sustenance or commercial purposes throughout the humid tropics of the Americas, Asia, and Africa. In West Africa (primarily Ghana, Ivory Coast, and Nigeria), Achatina achatina, a giant African snail, is also gathered, sold, eaten, and monitored as part of the bushmeat trade. To reflect the global nature of hunting of wild animals, Resolution 2.64 of the IUCN General Assembly in Amman in October 2000 referred to wild meat rather than bushmeat. A more worldwide term for terrestrial wild animals is game. The term bushmeat crisis is sometimes used to describe unsustainable hunting of often endangered wild mammals in West and Central Africa and the humid tropics, depending on interpretation. African hunting predates recorded history; by the 21st century, it had become an international issue. The volume of the bushmeat trade in West and Central Africa was estimated at 1-5 million tonnes per year at the turn of the century.  According to the Center for International Forestry Research (CIFOR) in 2014, approximately 5 million tonnes were still being consumed per year in the Congo Basin.

For the people of this region, bushmeat represents a primary source of animal protein in the diet, making it a significant commercial industry. According to a 1994 study in Gabon, annual sales were estimated at US$50 million. The study found that bushmeat accounted for more than half of meat sold in local markets, with primates representing 20% of the total bushmeat. 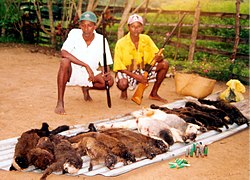 Endangered species, including lemurs from Madagascar are killed for bushmeat despite this being illegal. 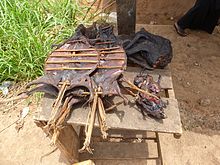 Bushmeat is often smoked prior to consumption.

Logging concessions operated by companies in African forests have been closely linked to the bushmeat trade. Because they provide roads, trucks and other access to remote forests, they are the primary means for the transportation of hunters and meat between forests and urban centres. Some, including the Congolaise Industrielle du Bois (CIB) in the Republic of Congo, have partnered with governments and international conservation organizations to regulate the bushmeat trade within the concessions where they operate. Numerous solutions are needed; because each country has different circumstances, traditions and laws, no one solution will work in every location.

In the case of Ghana, international over-exploitation of African fishing grounds has increased demand for bushmeat. Both EU-subsidized fleets and local commercial fleets have depleted fish stocks, leaving local people to supplement their diets with animals hunted from nature reserves. Over 30 years of data link sharp declines in both mammal populations and the biomass of 41 wildlife species with a decreased supply of fish.

In the case of Liberia in West Africa, bushmeat is eaten widely and is considered a delicacy. A 2004 public opinion survey found that bushmeat ranked second behind fish among residents of the capital Monrovia as a preferred source of protein. Of households where bushmeat was served, 80% of residents said they cooked it “once in a while”, while 13% cooked it once a week and 7% cooked bushmeat daily. The survey was conducted during the last civil war, and bushmeat consumption is now believed to be far higher.

Role in spread of diseases

The transmission of highly variable retrovirus chains causes zoonotic diseases. Outbreaks of the Ebola virus in the Congo Basin and in Gabon in the 1990s have been associated with the butchering of apes and consumption of their meat. Bushmeat hunters in Central Africa infected with the human T-lymphotropic virus were closely exposed to wild primates.

Results of research on wild chimpanzees in Cameroon indicate that they are naturally infected with the simian foamy virus and constitute a reservoir of HIV-1, a precursor of the acquired immunodeficiency syndrome (AIDS) in humans. There are several distinct strains of HIV, indicating that this cross-species transfer has occurred several times. Researchers have shown that HIV originated from a similar virus in primates called simian immunodeficiency virus (SIV); it is likely that HIV was initially transferred to humans after having come into contact with infected bushmeat.

The Ebola virus, for which the primary host is suspected to be fruit bats, has been linked to bushmeat. Between the first recorded outbreak in 1976 and the largest in 2014, the virus has transferred from animals to humans only 30 times, despite large numbers of bats being killed and sold each year. Bats drop partially eaten fruits and pulp, then land mammals such as gorillas and duikers feed on these fallen fruits. This chain of events forms a possible indirect means of transmission from the natural host to animal populations.

Although primates and other species may be intermediates, evidence suggests people primarily contract the virus from bats. Since most people buy smoked bushmeat, hunters and people preparing the food have the highest risk of infection. Hunters usually shoot, net, scavenge or catapult their prey, and butcher the bats without gloves, getting bites or scratches and coming in contact with their blood.

In 2014, the suspected index case for the Ebola outbreak in West Africa is a two-year-old child in Guéckédou in south-eastern Guinea, who was the child of a family that hunted two species of fruit bat, Hypsignathus monstrosus and Epomops franqueti.

Some researchers suggested the case was caused by zoonotic transmission through the child playing with an insectivorous bat from a colony of Angolan free-tailed bats near the village.

Despite health organisations warning about risks of bushmeat, surveys pre-dating the 2014 outbreak indicate that people who eat bushmeat are usually unaware of the risks and view it as healthy food. Because of bushmeat’s role as a protein source in Western Africa, it is traditionally associated with good nutrition, and efforts to outlaw the sale and consumption of bushmeat have been impossible to enforce and have met with suspicion from rural communities. In one study in Ghana, none of the bushmeat hunters knew about Ghana’s hunting laws, suggesting that bans may not be enforceable.

The UN Food and Agriculture Organization estimates that between 30 and 80 percent of protein intake in rural households in Central Africa comes from wild meat. However, as human populations grow, the interactions between humans and wildlife will increase, making possible zoonotic transmission of diseases from animal hosts more likely.

One major Nigerian newspaper published a report about the widespread view that eating dog meat was a healthy alternative to bush meat. Dog meat was implicated in a June 2015 Liberian outbreak of Ebola, where three villagers who had tested positive for the disease had shared a meal of dog meat.

Animals used as bushmeat may also carry other diseases such as smallpox, chicken pox, tuberculosis, measles, rubella, rabies, yellow fever and yaws. African squirrels (Heliosciurus, Funisciurus) have been implicated as reservoirs of the monkeypox virus in the Democratic Republic of the Congo. The bubonic plague bacteria can transfer to humans when handling or eating North American prairie dogs.

In many instances, contracting the diseases mentioned above often occurs due to the cutting of the meat, when animal blood and other fluids may touch the people cutting it, thereby infecting them. Another path of infection is that some of the meat may not be completely cooked. This often occurs due to the type of heat source employed; meat hung over open fires. Improper preparation of any infected animal may be fatal. 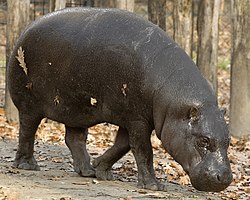 Pygmy hippos are among the species illegally hunted for food in Liberia. The World Conservation Union estimates that there are fewer than 3,000 pygmy hippos remaining in the wild.

The consumption of bushmeat threatens a wide range of species, including species that are endangered and threatened with extinction. For example, a range of endangered species are hunted for bushmeat in Liberia.

Species hunted for food in Liberia include elephants, pygmy hippopotamus, chimpanzees, duikers, and other monkeys. Forest rangers in Liberia say that bushmeat poachers will kill any forest animal they encounter.

A gorilla in the DR Congo, 2008. The use of buckshot has helped bushmeat hunters target gorillas by allowing them to more easily kill the dominant male silverback.

The great apes of Central and West Africa—gorillas and chimpanzees—are nearly ubiquitously sold as bushmeat throughout the region, and a study from 1995 suggests that the off-take is unsustainable. With the exception of a 1995 report from Cameroon, where gorillas were considered a target species for hunters, Central and West African hunters do not appear to target them. Historically, poachers have favored hunting chimpanzees because they flee when one is shot. Gorillas, however, only became easy targets when buckshot ammunition became available, allowing the hunters to more easily kill the dominant male silverback whose role it is to defend his troop.

Generally, great apes constitute a minor portion of the bushmeat trade. Although a 1996 study indicated that approximately 1.94% of animal carcasses sold and consumed in Brazzaville in the Republic of the Congo belonged to great apes, it accounted for 2.23% of the biomass of the meat sold, which is significant for ape populations relative to their ecosystem. Furthermore, these numbers may not have accurately represented the extent of the problem for the following reasons:

During the time interval between a study from 1981 to 1983 and another study between 1998–2002 in Gabon, ape population density fell 56%, despite the country retaining nearly 80% of its original forest cover. This decline was primarily associated with the transformation of the bushmeat trade from subsistence level to unregulated, commercial hunting, facilitated by transportation infrastructure intended for logging purposes. Unsustainable hunting practices along with habitat loss makes the extinction of these endangered primates more likely.