Ursula Hedwig Meta Haverbeck-Wetzel (born 8 November 1928) is a German author from Vlotho, Germany. Since 2004, she has also been the subject of lawsuits due to her “Holocaust” denial which in Germany is against the law.

Her husband was Werner Georg Haverbeck (de), who during the National Socialist period was temporarily engaged in the national leadership of the National Socialist Party, founder and director in 1933 of the German Imperial Federation of Nation and Homeland (de), as well as writer and publisher, historian, folklorist and parson of The Christian Community. From 1982 he was also on the Scientific Advisory Board of the Ecological-Democratic Party (ÖDP) and party member.

In November 2015, at the age of 87, she was sentenced to ten months’ imprisonment for Holocaust denial. Several additional convictions in the fall of 2016 led to further such sentences. She has still never spent a day in prison, because she is still appealing all sentences .

Born at Winterscheid (today part of Gilserberg) in Hesse, Ursula Haverbeck-Wetzel, by her own account, lived in Sweden for four years as a homeland displaced person (Heimatvertriebene) from East Prussia and studied pedagogy, philosophy and linguistics, including two years in Scotland. For over fifty years, Haverbeck-Wetzel worked in the political shadow of her husband. After her husband’s death in 1999, she took over many of his functions including chair of the international adult education establishment Heimvolkshochschule Collegium Humanum in Vlotho, North Rhine-Westphalia, which they both founded in 1963. The Collegium Humanum was first active in the German environmental movement and from the early 1980s openly turned to the right-wing extremism movement; the establishment was subsequently banned by the German Federal Ministry of the Interior (Bundesministerium des Innern) in 2008.

From 1983 until 1989, Haverbeck-Wetzel was also president of the World Union for Protection of Life (Section Germany), and disclosed in this non-governmental position her opposition towards the Western system and the Allied occupation of the Federal Republic of Germany.

She was temporarily a member of the Ecological Democratic Party (ÖDP). In 1989, at the instigation of the ÖDP regional associations Bremen and North Rhine-Westphalia, she was excluded from the party, amongst other reasons because she attempted to organize a right-wing coalition of the ÖDP, NPD (National Democratic Party of Germany), and other groups.

In 1992, Haverbeck-Wetzel became first chairperson of the newly founded Memorial Sites Association (German: Verein Gedächtnisstätte e.V.), remaining in that position until 2003. The registered association was established in May 1992 with the statute to build a dignified remembrance for the German civilian victims of World War II by bombing, abduction, expulsion and detention centres, to end “the unjustified unilateral nature of the view of history and struggle to overcome the [negatives of the] past” (German: um “die ungerechtfertigte Einseitigkeit der Geschichtsbetrachtung und Vergangenheitsbewältigung” zu beenden).

She is a friend of Gudrun Burwitz, Heinrich Himmler’s daughter.

Well before Germany’s reunification in 1990, Haverbeck-Wetzel cultivated connections to right-wing political groups like the NPD (National Democratic Party of Germany) with the aim of a major national collective movement in Germany. This orientation intensified in the years following. It was probably via this path that around 2000 she became acquainted with the Neo-nazi lawyer Horst Mahler. From this she became active as member and deputy director of the “Society for the Rehabilitation of Those Persecuted for Refutation of the Holocaust” (German Verein zur Rehabilitierung der wegen Bestreitens des Holocaust Verfolgten (de)), which was founded in Vlotho on 9 November 2003, the anniversary of Kristallnacht. Chaired by the Swiss Holocaust denier Bernhard Schaub. Additionally, almost all well-known Holocaust deniers, including Ernst Zündel (Canada), Robert Faurisson (France), Germar Rudolf, Jürgen Graf, Gerd Honsik, Wilhelm Stäglich, Fredrick Toben (Australia), Andres Studer, Hans-Dietrich Sander, Manfred Roeder, Frank Rennicke and Anneliese Remer were also involved in its establishment. The organization was subsequently banned in May 2008 by the German Federal Ministry of the Interior (Bundesministerium des Innern) on the grounds of being hostile to the constitution of Germany. 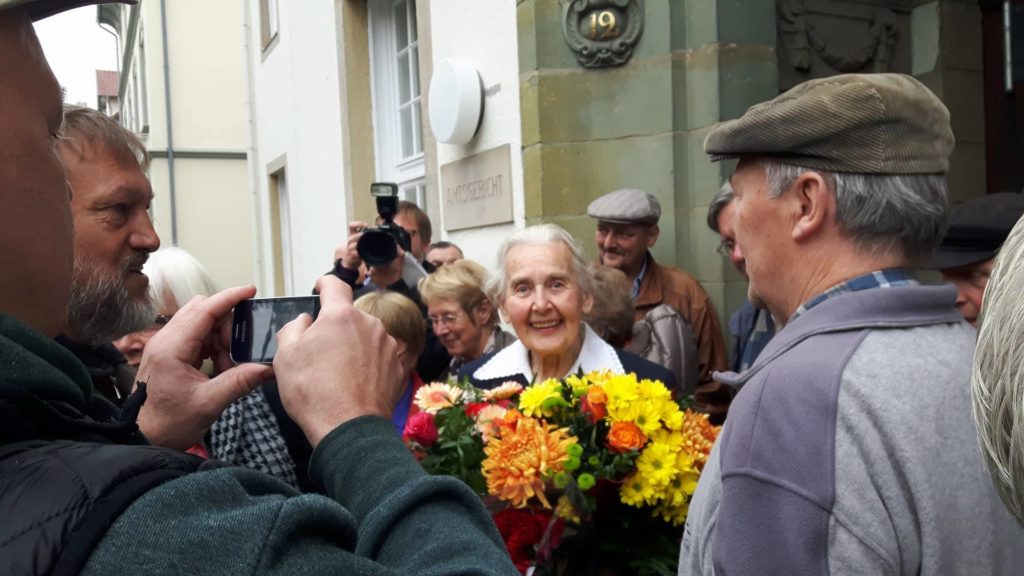 In June 2004, the district court of Bad Oeynhausen sentenced Haverbeck to a €5,400 fine (180 days at €30 each) for sedition. In the house journal of the Collegium Humanum, the Voice of Conscience (Stimme des Gewissens), she had introduced a form of denial of the Holocaust, together with the editor of the magazine, Ernst-Otto Cohrs. The two incriminated publication issues were subsequently confiscated by the German authorities. In a subsequent issue of the Voice of Conscience it was again claimed that the mass destruction of the Jews was “a myth”. Packaged in a citation by the Russian newspaper Russkiy Vestnik (the Russian Messenger) who had published in Russia a special revisionist analysis issue of Jürgen Graf‘s work, with the special Russkiy Vestnik issue later cited favourably in Moscow’s newspaper Pravda by Valentin Prussakov, it was alleged that the number of Jewish victims of National Socialism did not amount to six million, but only about 500,000. On 10 March 2005, the court found a second case against Haverbeck-Wetzel and Cohrs. However, at the request of the Bielefeld Public Prosecutors Office the case was closed since “it was immaterial compared to another”.

Another article by Haverbeck-Wetzel in the Voice of Conscience (November/December 2005) posited a thesis that Adolf Hitler was “just not to be understood from the believed Holocaust or his alleged war obsession, but only by a divine mission in the world-historical context.” This triggered a renewed process for sedition, and in June 2007 another fine of 40 days at €30 euros each by the Dortmund Regional Court. Altogether a total fine of €6,000 (200 days at €30 each) was formed.

In June 2009, the District Court of Bad Oeynhausen found Haverbeck-Wetzel guilty of offending Charlotte Knobloch, president of the Central Council of Jews in Germany, who had earlier publicly advocated censorship of the Collegium Humanum Holocaust-deniers tools. According to the 1 July 2009 newspaper article in Mindener Tageblatt (de), Haverbeck-Wetzel wrote in her open letter response for the attention of Knobloch, among other things, Knobloch should not “interfere in German domestic affairs”, if Knobloch does not like it in Germany, then she could “return to her origin in Inner Asia“, and: “You do not have to live in Germany – in this evil land, where, as you say, six million of you were gassed.” Her open letter also contained hostility such as “Prepare yourself for the day of truth. It is near and unstoppable.”, as well as “I warn you.”…”If you continue as before, then a new pogrom could result, which would be horrific.” Knobloch subsequently filed a criminal complaint, and Haverbeck-Wetzel was sentenced to a fine of 2,700 euro.

In November 2014, Haverbeck-Wetzel lodged a police complaint against the Central Council of Jews in Germany. She accused the council of “persecution of innocent people”. The investigation was abandoned in December 2014. The Bielefeld Public Prosecutors Office eventually examined proceedings against Haverbeck-Wetzel for false accusation.

In the ARD television broadcast series Panorama (German TV series) (de) produced by NDR in March 2015, and despite proceedings prohibiting, Haverbeck-Wetzel again denied the mass destruction of the Jews and discussed her views. She described “this Holocaust” as “the biggest and most persistent lie in history”. Haverbeck-Wetzel published a video on YouTube protesting against the trial of Oskar Gröning, the so-called “Accountant of Auschwitz”, and distributed leaflets outside the court which were reported to feature Holocaust denial.

Haverbeck-Wetzel became the subject of a new investigation initiated in June 2015 by the Bielefeld Public Prosecutors Office, in connection with a publication in the journal The Voice of the Empire (Die Stimme des Reiches), prompting Haverbeck-Wetzel’s home as well as that of three other accused persons to be searched by the State Criminal Police Office of Lower Saxony (Landeskriminalamt Niedersachsen) for evidence. In November, after being found guilty, she was sentenced to ten months in prison. In the Hamburg court, she insisted the status of Auschwitz as a place of death is “not historically proven” and is “only a belief”.

In September 2016, Haverbeck-Wetzel was sentenced to ten months imprisonment for sedition, without the option for parole, but remained free until an appeal is heard concerning the earlier case. She had written to Detmold‘s mayor, Rainer Heller the previous February insisting Auschwitz was no more than a labor camp and those who survived were only “alleged witnesses” following the trial of former Auschwitz SS guard Reinhold Hanning. In October, she was sentenced to 11 months in Bad Oeynhausen for incitement to hate. In court again, the next month, Haverbeck-Wetzel was sentenced in Verden to 2​1⁄2 years in jail for sedition after making her usual claims in Voice of the Reich (Stimme des Reiches).