The Period of Osmund

It was merchants from Lübeck who, in the Middle Ages, began to interest the kings of Sweden in the export of iron on a large scale. It was also at that time that German mine owners and merchants acquired the rights to run their own operations in Sweden’s mining areas and trading communities.

Mining and foreign trade thereby paved the way for the integration of Sweden into the mainstream of European civilisation. The consequence was a new economic structure and the emergence of a broader society in the formerly agrarian Sweden.

The Swedish iron exports during the Middle Ages comprised so-called osmunds—a standardised format of high-grade forged iron with a weight of just 3 hectograms.The osmund was an accepted object of barter both in Sweden and abroad and was also used as a form of payment with its value being determined by the Crown.

In the 14th century, about half of Sweden’s iron production was exported, mainly to Lübeck and Danzig.The entire annual production at this time has been estimated at 2,000 tonnes, less than a third of the production from the German forges.

Since the cogs (trading vessels) from Lübeck were not able to enter Lake Mälar, Stockholm was established as a transhipment centre, customs station and port of shipment for iron and copper exports from Närke, Västmanland and Dalarna.

In the 1420’s the Scandinavian king, Erik of Pommern, granted preference to Swedish seamen and merchants over their counterparts from Germany and barred Öresund to the cogs fiom Lübeck. This was devastating for Swedish iron exports and led to peasant miners fiom Dalarna and Västmanland – together with merchants in Stockholm, all under the leadership of the peasant miner Engelbrekt – breaking out of the union with Denmark and Norway.

Lübeck, which helped Gustav Vasa gain power – this in exchange for the sole rights to trade in Sweden – saw itself defeated by the united forces of the Swedish and Danish kings. The trading monopolies enjoyed by other Hanse cities would also later be abolished following the expansion of Dutch and English shipping in the North Sea and the Baltic.

The price of Swedish osmund iron started to decline around the mid-14th century and continued to fall during the 15th century.The reasons were to be found on both the producers’ and consumers’ side. In Europe, the more blast furnace technology was used the more iron production increased, thereby putting pressure on Swedish products. Even though the price fell, Swedish exports of osmund  iron to Danzig increased during the 16th century. Here, Swedish iron was used as a basis for the manufacture of a more workable forging iron, which was turned into long bars – known at the time as bar iron – by water-powered iron hammers. This was then sold on under the designation, ‘bar iron from Danzig’, mainly to Holland and England.

More than 90 per cent of the steel that Sweden imports comes from other European countries. 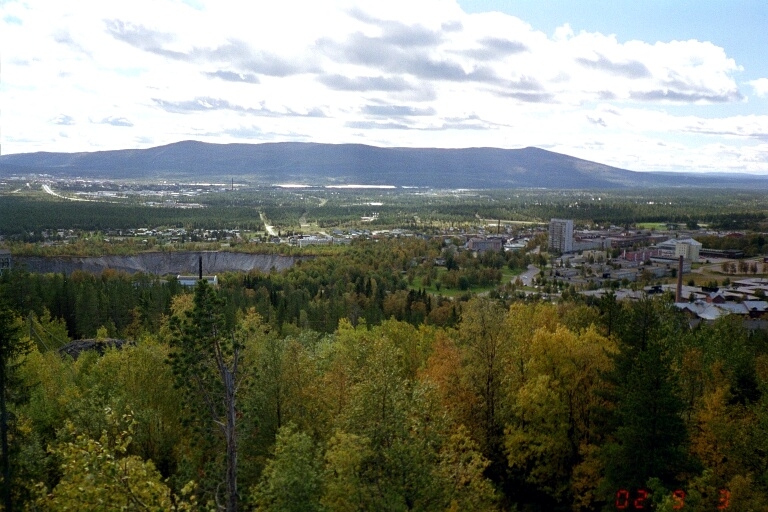 The Malmberget mine (Swedish: Malmbergsgruvan) is one of the largest iron ore mines in Sweden. The mine is located in Malmberget in Norrbotten County, Lapland.

In 2009 the mine produced 4.3 million tonnes of iron. It is one of the largest underground mines for iron ore in the world.

The new main level is located at 1250 meter, while the deepest point is 1390 meter below ground.

Kiirunavaara (Northern Sami: Gironvárri or Kierunavaara) is a mountain in Kiruna, Sweden that contains one of the largest and richest bodies of iron ore in the world. The presence of iron in the area was known already in the mid-17th century, but at this early time communication lines to this northerly region were quite insufficient to permit any major exploitation. Only with the construction of a railway, the Iron Ore Line and the ports of Narvik and Luleå at the end of the 19th century did commercial mining become a realistic proposition. The Swedish mining company LKAB (Luossavaara-Kiirunavaara Aktiebolag) has been mining the mountain since the beginning of the 20th century.

The mining area around Kiruna and Malmberget and the iron port and steelworks at Luleå made Norrbotten County one of the first, and most prominent, regions of heavy industry in Sweden, and the wider region has remained at the forefront of mining and steel smelting and alloying technology.

Luossavaara (Northern Sami: Luossavárri) is a mountain in Kiruna, Sweden. It is the site of a now-inactive iron ore mine formerly operated by the Swedish mining company LKAB. Today it has a ski lift and slope, as well as a hiking path called Midnattsolstigen (the Midnight Sun Trail).

In Bergslagen mining and metallurgic industry have been important since the Middle Ages. The region is to be distinguished from Malmfälten (“the Ore Fields”), the mining district of northernmost Sweden centered at the towns of Kiruna and Malmberget, that has been of greater importance during the 20th century.

Bergslagen covers part of the provinces of Västmanland, Dalarna (the southern part), and Värmland (the eastern part). Typical towns in the area include Nora, Fagersta, Sala, Kristinehamn, Filipstad, Ludvika and Hedemora. Also parts of northern Östergötland, around Finspång, as well as southern Närke can be included, then often referring to South Bergslagen. A wider definition of the area can include parts of Gästrikland (Hofors) and Uppland (the former iron manufacturing district centred on Dannemora) as well.

The conflict of interests between iron exports from Bergslagen and territorial conflicts at Denmark‘s southern border was a chief reason behind the Engelbrekt rebellion in 1434 and the following strifes that ultimately resulted in the dissolution of the Kalmar Union in 1523.

The region was an industrial powerhouse from the 17th century, up to the Steel crisis during the 1970s.

The area is very rich in minerals. Mining has been focused on iron ore for centuries but other ores has been mined as well. Most mines are now closed, but in the 1970s many mines were still in operation. The earliest signs of iron making dates back to 400 BC while industrial scale activities dates back to the 17th century.

At Långban, where iron and manganese has been mined, 270 mineral species has been reported to date. Many of these minerals are unique to the Långban deposit, and 67 minerals were first found at this site.

Riddarhyttan is a locality in Skinnskatteberg Municipality, Västmanland County, Sweden, with 431 inhabitants in 2010. It has an old iron mining tradition, which can be followed back to the last centuries before Christ, the last mine was closed down in 1979.

Riddarhyttan is, along with Skinnskatteberg, one of only two urban areas or localities (more than 200 inhabitants) in the Skinnskatteberg Municipality in the western part of Västmanland County, on the border to Örebro County. It is located in the north of the historical province of Västmanland. The area of the locality, as defined by Statistics Sweden, is 1.56 km2.

The Swedish national road 68 is running through Riddarhyttan and the lake Lien is located next to it. It lies in the middle of the historically mining district Bergslagen. It is about 30 km to Fagersta, 35 km to Lindesberg and 70 km to Västerås.

When the last ice age in Bergslagen came to an end about 9,500 years ago, Riddarhyttan was located on the border between land and sea. That resulted in kettles, glacial erratics and other specific landforms. When the ice was melting, iron was released from the bedrock into the groundwater and became exposed iron oxide (ochre). That gave rise to a red-colour soil in some parts of Riddarhyttan, especially in the area called Röda Jorden (red earth).

People started to extract iron from the red earth in the Riddarhyttan area sometime between 700 BC and 400 BC, which makes it the oldest area with ironworks in the Bergslagen region. Remains of several primitive blast furnaces have been found and the age have been established by carbon dating. The iron-making was carried on until about the birth of Christ.

The locality Riddarhyttan dates back to the Middle Ages.  Hälsingegruvan and Munkhyttan was mentioned as early as 1420. It was the State that first commenced mining in the area but private persons, or Bergsmän, were granted to use the mines later on. In 1611, Thomas Hammarsmed was granted the right to erect a forge and an iron blast-furnace.