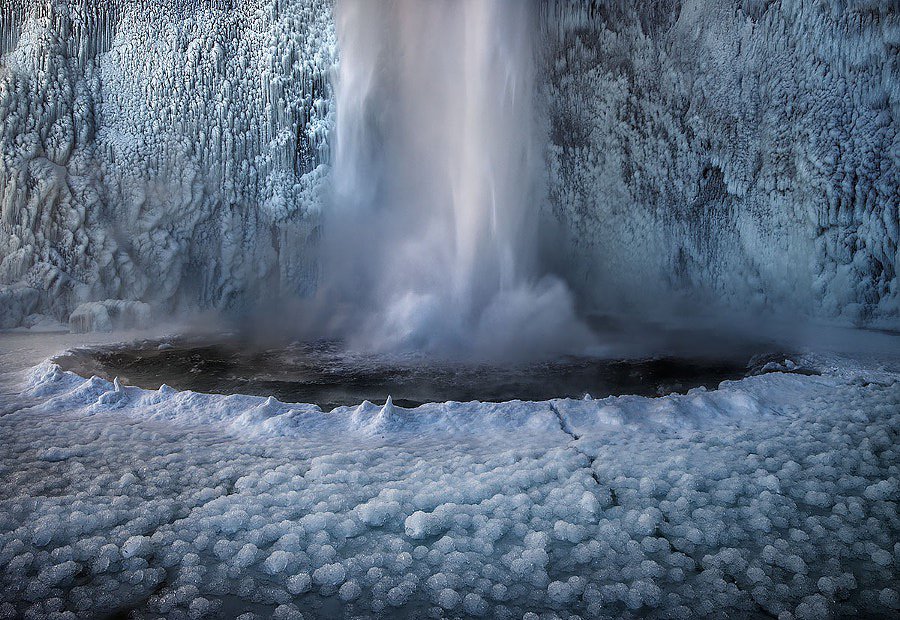 Skógafoss (pronounced [ˈskou.aˌfɔs]) is a waterfall situated on the Skógá River in the south of Iceland at the cliffs of the former coastline. After the coastline had receded seaward (it is now at a distance of about 5 kilometres (3.1 miles) from Skógar), the former sea cliffs remained, parallel to the coast over hundreds of kilometres, creating together with some mountains a clear border between the coastal lowlands and the Highlands of Iceland.

The Skógafoss is one of the biggest waterfalls in the country with a width of 15 metres (49 feet) and a drop of 60 m (200 ft). Due to the amount of spray the waterfall consistently produces, a single or double rainbow is normally visible on sunny days. According to legend, the first Viking settler in the area, Þrasi Þórólfsson, buried a treasure in a cave behind the waterfall. The legend continues that locals found the chest years later, but were only able to grasp the ring on the side of the chest before it disappeared again. The ring was allegedly given to the local church. The old church door ring is now in the Skógar museum.

At the eastern side of the waterfall, a hiking and trekking trail leads up to the pass Fimmvörðuháls between the glaciers Eyjafjallajökull and Mýrdalsjökull. It goes down to Þórsmörk on the other side and continues as the Laugavegur trail to Landmannalaugar.