Nepeta cataria, commonly known as catnip, catswort, and catmint, is a species of the genus Nepeta in the family Lamiaceae, native to southern and eastern Europe, the Middle East, central Asia, and parts of China. It is widely naturalized in northern Europe, New Zealand, and North America. The common name catmint can also refer to the genus as a whole. The names catnip and catmint are derived from the intense attraction most cats have towards them. 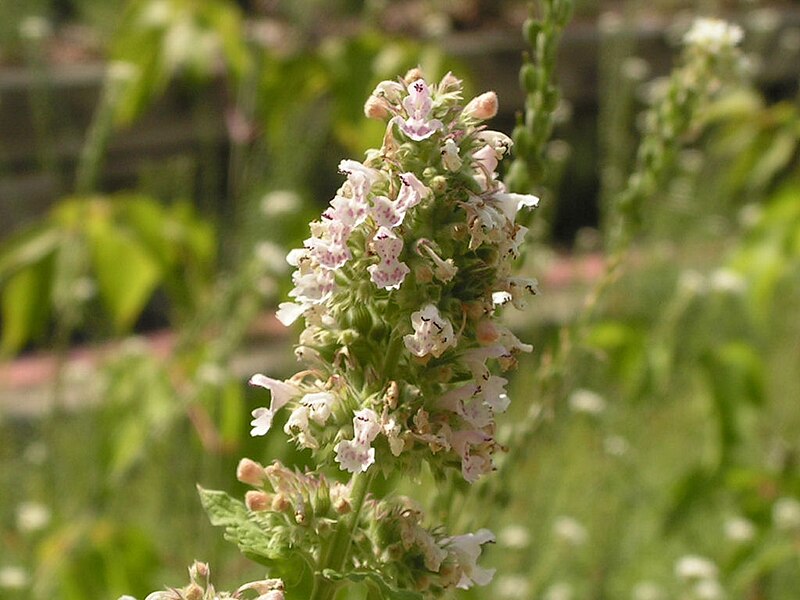 Catnip contains the feline attractant nepetalactone. Nepeta cataria (and some other species within the genus Nepeta) are known for their behavioral effects on the cat family, not only on domestic cats but also other species of cats. Several tests showed that leopards, cougars, servals, and lynxes often reacted strongly to catnip in a manner similar to domestic cats and while lions and tigers can react strongly as well, they do not react as consistently.

With domestic cats, N. cataria is used as a recreational substance for pet cats’ enjoyment, and catnip and catnip-laced products designed for use with domesticated cats are available to consumers. Common behaviors cats display when they sense the bruised leaves or stems of catnip are rubbing on the plant, rolling on the ground, pawing at it, licking it, and chewing it. Consuming much of the plant is followed by drooling, sleepiness, anxiety, leaping about and purring. Some growl, meow, scratch or bite at the hand holding it. The main response period after exposure is generally between five and fifteen minutes, after which olfactory fatigue usually sets in.

About 33% of cats are not affected by catnip. The behavior is hereditary; an early 1962 pedigree analysis of 26 cats in a Siamese breeding colony, suggested that the catnip response was caused by a Mendelian dominant gene but a 2011 pedigree analysis of 210 cats in two breeding colonies (taking into account measurement error by repeated testing) showed no evidence for Mendelian patterns of inheritance and demonstrated heritabilities of h2 = 0.51–0.89 for catnip response behavior, indicating a polygenic liability threshold model. Other plants that also have this effect on cats include valerian (Valeriana officinalis) root, silver vine (Actinidia polygama) and Tatarian honeysuckle (Lonicera tatarica) wood. It has been shown that many cats who do not respond to catnip do respond to one or more of these three alternatives.