Assens Shipyard A/S is a Danish shipyard. The shipyard, which was established in ca. 1850, is located in Assens.
Until 1914 was the size of the ships launched in Assens, 3-masted schooners. Then it was smaller ships, including the fishingboats and special vessels.
Today, the shipyard builds up many different ship sizes and types. 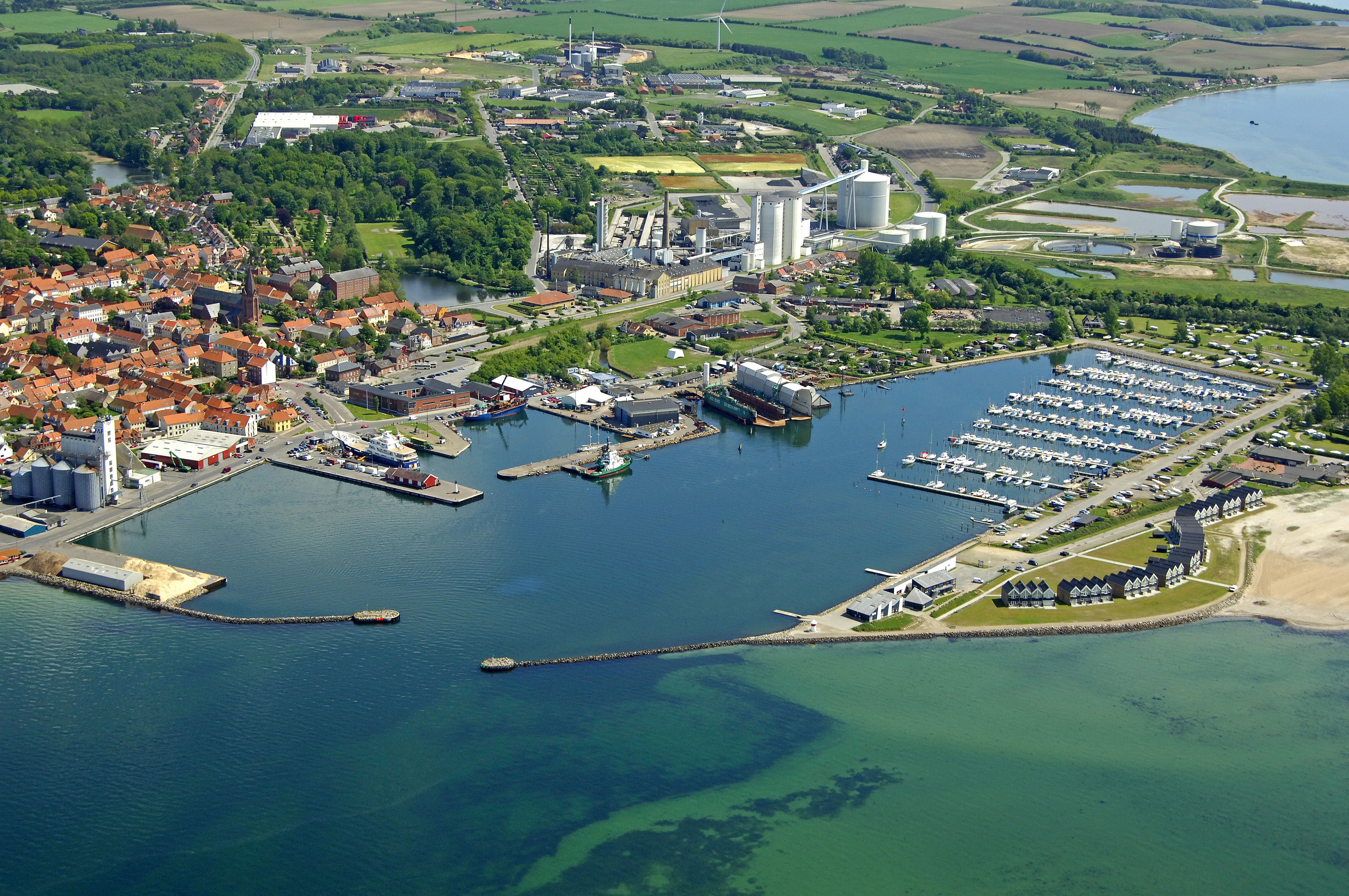 The yard has two floating docks.

This dock can be fully covered.
It is possible to heat the dock for special tasks. 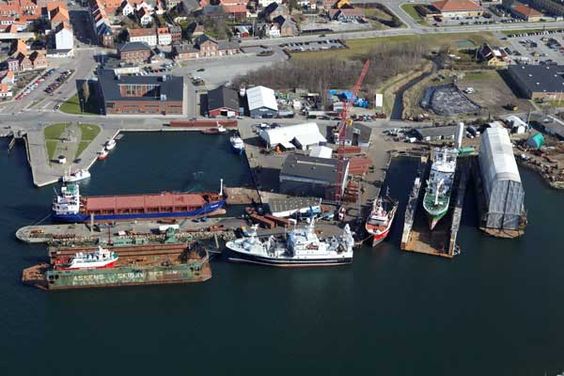 Assens Shipyard with 3 floating docks (above). 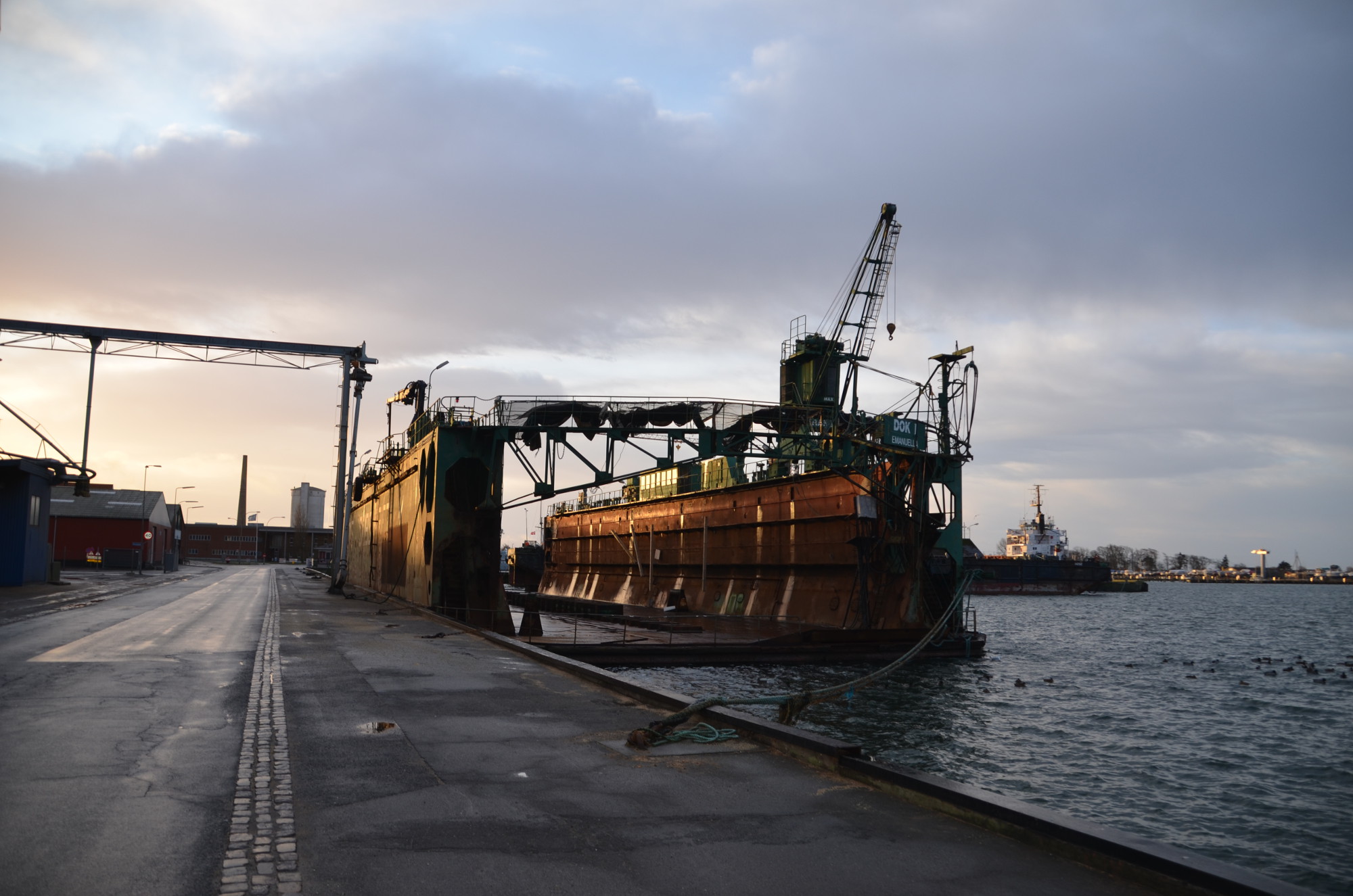 Assens (Danish: [ˈasn̩s]) is a town with a population of 5,956 (1 January 2014) on the west coast of the island of Funen on the eastern side of the Little Belt in central Denmark.
By road, Assens is located 41.2 kilometres (25.6 mi) southwest of Odense, 34 kilometres (21 mi) northwest of Faaborg, and 33.34 kilometres (20.72 mi) southeast of Middelfart. Assens is the municipal seat of Assens Municipality in Region of Southern Denmark.
It was the birthplace of sculptor Jens Adolf Jerichau who married the well-known portraitest Elisabeth Jerichau-Baumann; both artists’ works are exhibited at the local art museum, Vestfyns Kunstmuseum.

Assens is located on the site of an old ferry landing linking Funen and the south of Jutland. A bay provided a natural harbour while the Little Belt encouraged trade and transport. It probably became a market town in the 13th century. The ferry, which probably originated in the Middle Ages, became particularly significant in the 16th century with sizeable cattle exports. The town was hard hit by the Swedish Wars in the 17th century, causing a reduction in trade. It nevertheless continued to be the main ferry link between Jutland and Funen.

Prosperity returned at the end of the 18th century, increasing in the 19th century after a new harbour was completed in 1822. However the railway to Middelfart in 1865 provided considerable competition but the town suffered above all from the discontinuation of the ferry service after Southern Jutland was lost to the Germans in 1864.

At the end of the 19th century, there were few industries in Assens, the main source of income still being trade and crafts. In 1884, however, the railway to Tommerup linked Assens to Odense and in 1885, the harbour was extended with a new dock. A sugar factory was established, providing over 300 jobs by the end of the century. There was also a marked increase in population.

With reunification after the First World War, the ferry to Southern Jutland was reopened and ran until 1972. The sugar factory remained the main source of employment but a number of smaller metal foundries and food companies were established. Like most of Funen’s other towns, Assens remained in the shadow of Odense, recording only modest growth. Its population grew only slightly, from around 4,600 in 1901 to 5,800 in 2004.

Assens Station (above), Assens Church (below)

Today the town still has a small shipyard, a few metallurgical and chemical factories and the Vestfyen brewery. The sugar factory was closed in 2006. In 2007, the public sector benefited from Assens position as the seat of the new Assens Municipality.
Companies headquartered in Assens Municipality include the Carl Hansen & Søn furniture manufacturer in Aarup.

Assens Church (Vor Frue Kirke) is the second largest church building on the island of Funen. Built in the 15th century on the site of a former Romanesque church, the red-brick building was comprehensively restored in the 19th century. It bears the influence of north German Gothic architecture. The tower with its octagonal base and spire is 48 m (157 ft) in height. The altarpiece and pulpit are from the 17th century. 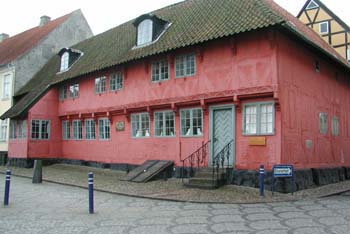 Willemoesgården, one of the oldest houses in the town, was the birthplace of Peter Willemoes (1783–1808) who became a celebrity after heroic action in the Battle of Copenhagen. The building is now a museum with exhibits on the history of the town and its seafaring heritage.

Assens Marina with 600 berths including a quay for visitors is located next to the local camping facility and sports centre with shops and a restaurant. It is open from May until the end of August.