The castle of Neuhaus is an important building of the Weser Renaissance. It is located in an island-like location at the confluence of Lippe, Alme and Pader (rivers) in the southeast corner of Westphalian Bay. 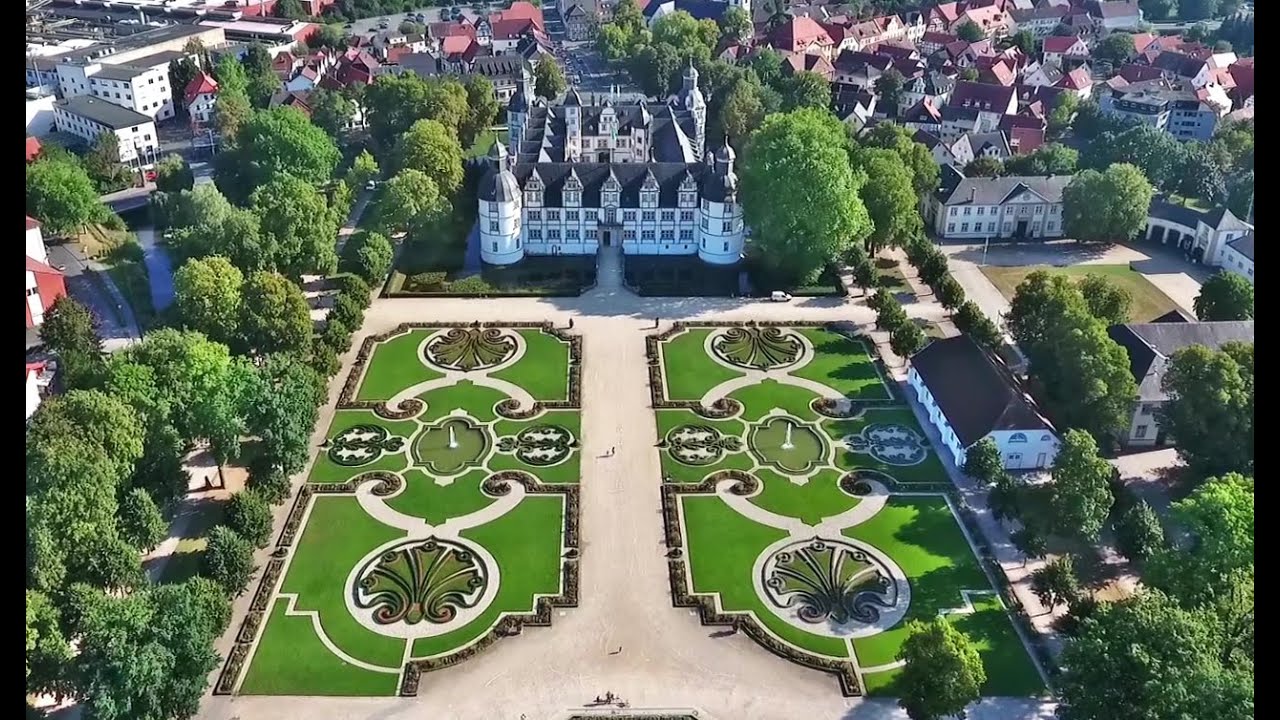 The first mention of the town of Neuhaus dates from the year 1016 and is to be taken from the Vita “Meinwerci” by abbot Konrad von Abdinghof. 1036 is the documentary mention. Local caretaker Michael Pavlicic reports in the Chronicle of the St. Henricus Brotherhood from the year 2013 on the episcopal main patio Nyenhus with the works of Elesen, Ascha, Burch and Thune.
In the year 1257, the Paderborn bishops built a fixed house in a protected location about four kilometres northwest of the city of Paderborn. Due to disputes with the city’s citizenship, Bishop Heinrich von Spiegel in the year 1370 finally moved the episcopal residence to Neuhaus, from where until the annexation of the Kingdom of Prussia 1802 the Prince Bishopric of Paderborn was ruled. The oldest surviving component of today’s four leaf plant, the house mirror, is named after him. Every other component of the castle is also given its name by the respective client.
From 1524 to 1526, during the reign of Erich von Braunschweig-Grubenhagens, Baumeister, Jörg Unkair, built the House of Brunswick which forms the present-day front.
In 1534, Hermann von Wied and the building of the House of Cologne connected the two previously separate buildings.
Between 1548 and 1560 the house Kerssenbrock was created under Rembert by Kerssenbrock.
In 1590, Dietrich von Fürstenberg extended the building to the four–wing plant that still exists today. The size of the castle was almost doubled, and the four round towers were also built in this section.
1736, under the Wittelsbach Clemens August, the Baroque garden was completed. At the castle, the grenadiers of the Paderborn Infantry Regiment served as guard.
During the seven Years ‘ War from 1756 to 1763 the castle was damaged.
After the peace of Lunéville annexed Prussia the Prince-Bishopric 1802 as compensation for left-Rhine area losses, although the state-law basis for this was done with the Reich deputations the closing date only a year later, 1803. From now on the castle is no longer a residence.
After this annexation and a short interplay in the “French Time”, in which the castle belonged from 1807 to 1813 to the Kingdom of Westphalia, it was used militarily. Afterwards the garrison of the following cavalry units was established: cuirassier-Regiment “von Driesen” (West Westfälisches) No. 4 First Eskadron (6 October 1820 to 1833), Hussar Regiment “Emperor Nicholas II of Russia” (1. West westfälisches) No. 8 (1851 to 1919), 15. Cavalry Regiment (1921 to 1945) (cf. also Officer–riding school in Paderborn).

As a result of the Second World War, the castle area was now within the British occupation zone and was confiscated by the British Rhine Army.
Only on July 19, 1964, after the municipality “Neuhaus” 1957 was renamed to “Schloss Neuhaus” on the occasion of the seven centuries Castle Jubilee and the British had officially returned the castle on 19 August 1959 to the authority of the federal government, the Municipality to buy the castle with the adjacent area from the administrative responsible Federal asset management at the price of 72,737 DM. 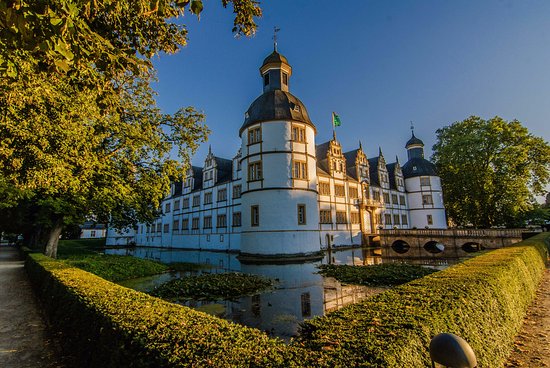 A lying stone figure falls on the roof ridge of the west gable of the House of Fürstenberg. Its origin is based on a legend, which is reproduced here in a short version:
Prince-Bishop Ferdinand von Fürstenberg (1626 – 1683) had invited to a hunt, including a nearby young relative a gentleman of Spiegel, who was known as a good shooter, but that day had no hunting luck and was very upset about it.
When the hunting party returned to the castle, a roofer working with repairs interrupted his work to see the arrival of the hunting party.
The angry hunter aimed at the roofer – only to show what a good shooter he was – and hit him deadly.
The Bishop’s command to take the offender escaped him to the horse. After years he visited Neuhaus again because he believed the bishop had forgotten the murder. However, he was arrested, sentenced to death, and executed on the Wewelsburg.
A memorial was placed at the scene of the murdered craftsman.
The ballad Kurt von Spiegel von Annette von Droste–Hülshoff is based on this story.

1967, the newly founded Realschool moved into the castle building with initially 32 students, today almost 800 students are taught by 43 teachers. In 1972 the gymnasium Schloss Neuhaus was founded there, but it was only for one school year in the castle and then temporarily outside the castle grounds. 1974 Finally, it could refer to the newly built school centre in the rear of the Chateau Park, which it shared with the neighbouring secondary school Heinrich. As on 1 January 1975 the municipality of Schloss Neuhaus was incorporated into the city of Paderborn, with this date the possession of the castle grounds and the support of the three schools passed into the hands of the city of Paderborn.
1994 the City of Paderborn at the Garden show of the state of North Rhine-Westphalia, which created around the castle of the castle and Auenpark, which has been used since 1995 for annual series of events, the castle summer.
The princely dining room of the castle (incorrectly referred to as “Mirror Hall” in Paderborn jargon) is today the “good parlour” of the city of Paderborn and is used for representative events and marriages. 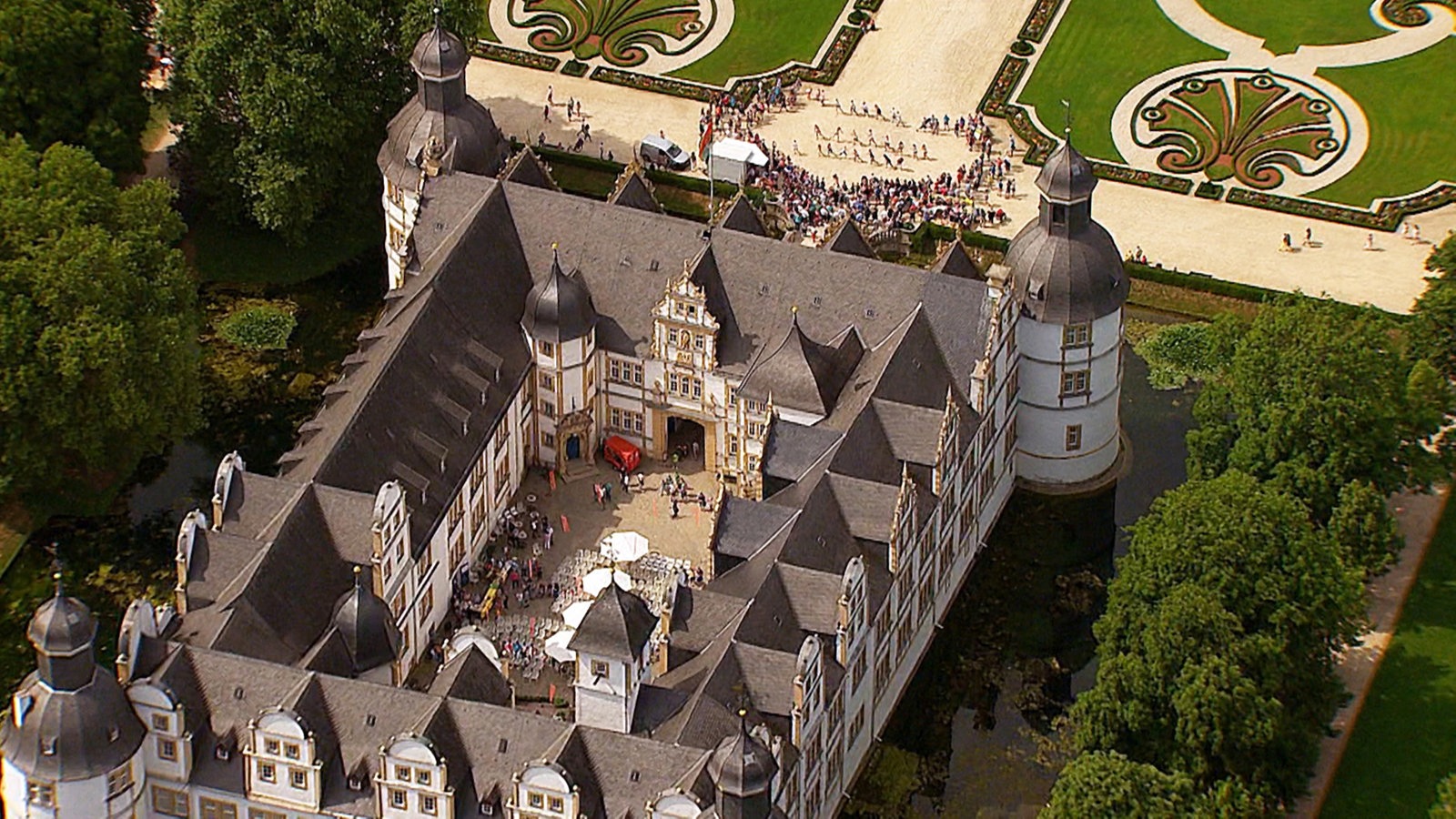 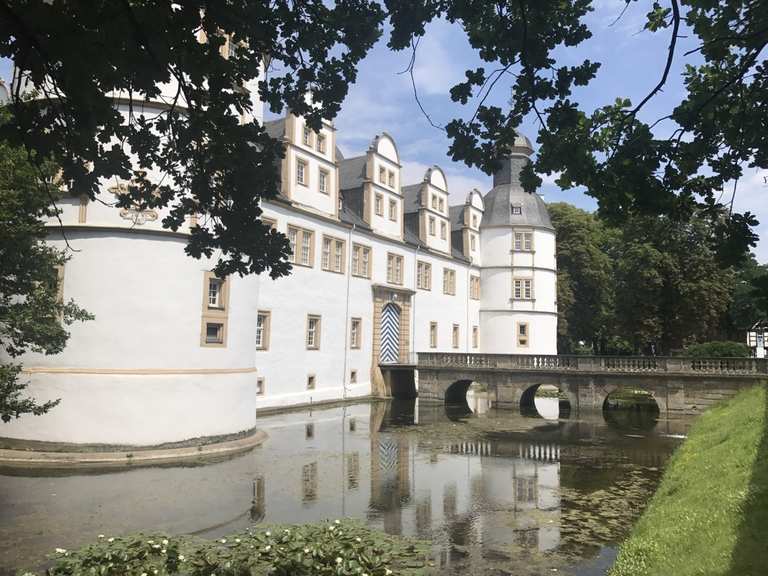 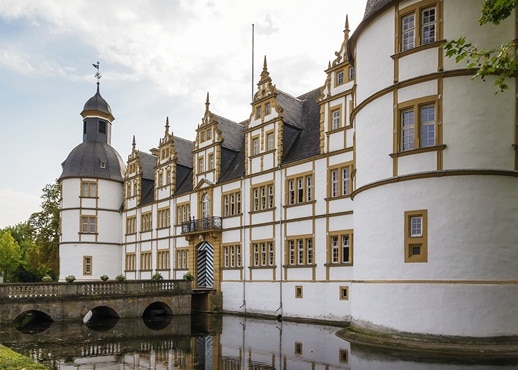