The Kermode bear (Ursus americanus kermodei), also known as the “spirit bear” (particularly in British Columbia), is a rare subspecies of the American black bear living in the Central and North Coast regions of British Columbia, Canada. It is the official provincial mammal of British Columbia. While most Kermode bears are black, there are between 100 and 500 fully white individuals. The white variant is most common on three islands in British Columbia (Gribbell, Princess Royal, and Roderick), where 10–20% of bears are white. Kermode bears hold a prominent place in the oral traditions of the indigenous peoples of the area. They have also been featured in a National Geographic documentary. The Kermode bear was named after Frank Kermode, former director of the Royal B.C. Museum, who researched the subspecies and was a colleague of William Hornaday, the zoologist who described it. A common mispronunciation of Kermode as /kərˈmoʊdiː/ kər-MOH-dee differs from the actual pronunciation of the Kermode surname, which originates on the Isle of Man and is properly pronounced /ˈkɜːrmoʊd/ KUR-mohd, which is the usual way to pronounce Kermode bear. In the Isle of Man the name is pronounced /kərˈmoʊd/ kur-MOHD.

White Kermode bears are not albinos as they still have pigmented skin and eyes.

Rather, a single, non-synonymous nucleotide substitution in the MC1R gene causes melanin to not be produced. This mutant gene is recessive, so Kermode bears with two copies of this mutant, nonfunctional gene appear white, while bears with one copy or no copies appear black. It is possible for two black bears to mate and produce a white cub if both of these black bears are heterozygous, carrying one copy of the mutant MC1R gene, and both mutant genes are inherited by the cub. Additional genetic studies found that white Kermode bears breed more with white Kermode bears, and black Kermode bears breed more with black Kermode bears, in a phenomenon known as positive assortative mating. One hypothesis is that this happens because young bears imprint on their mother’s fur color.

Kermode bears are omnivorous for most of the year, subsisting mainly on herbage and berries except during autumn salmon migrations, when they become obligate predators. During the day, white bears are 35% more successful than black bears in capturing salmon. Scientists have also found that salmon evade large, black models about twice as frequently as they evade large white models, giving white bears an advantage in salmon hunting. On some islands, white Kermode bears have more marine derived nutrients in their fur, indicating that white Kermode bears eat more salmon than the black Kermode bears.

The U. a. kermodei subspecies ranges from Princess Royal Island to Prince Rupert, British Columbia, on the coast, and inland toward Hazelton, British Columbia. It is known in the Tsimshianic languages as moksgm’ol. In the February 2006 Speech from the Throne by the Government of British Columbia, the Lieutenant Governor announced the government’s intention to designate the Kermode, or spirit bear, as British Columbia’s official animal. It was adopted as such in April of that year. A male Kermode bear can reach 225 kilograms (496 lb) or more, females are much smaller with a maximum weight of 135 kg (298 lb). Straight up, it stands 180 cm (71 in) tall.

Fewer than 400 Kermode bears are estimated to exist in the coast area that stretches from Southeast Alaska southwards to the northern tip of Vancouver Island; about 120 inhabit the large Princess and Prince Royal Island. The largest concentration of the white bears inhabits 80-square-mile (210 km2) Gribbell Island, in the territory of the Gitga’ata people.

The bear’s habitat is potentially under threat from the Enbridge Northern Gateway Pipelines, whose planned route passes near the Great Bear Rainforest. Native groups including the Gitga’at have opposed the pipeline. 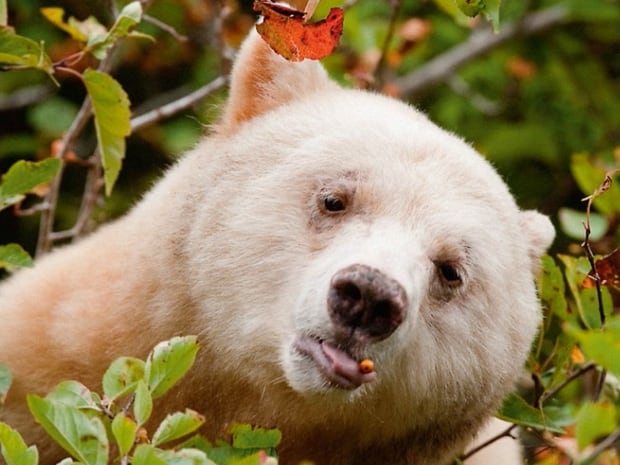 Although the Kermode bear is not listed as an endangered species, there have been considerable conservation efforts to maintain the rare subspecies population, due to the bear’s cultural significance. The main threats to the bear include habitat destruction due to oil pipelines and trophy hunting of black bears.

The majority of the Kermode bears’ protein intake is from salmon during the Fall season. Pipeline spills could cause damage to salmon populations by polluting ecosystems.

This would not only affect the bears but the entire ecosystem as salmon are a keystone species and are important to the nutrient intake of both aqueous and terrestrial environments. The salmon contribute nutrients to water during spawning and contribute to the land with decomposition of their carcasses when predators, such as bears, scatter them throughout the forest. Until November 26, 2016 the greatest pipeline threat to the Great Bear Rainforest had been the Enbridge Northern Gateway Pipelines, but Canadian Prime Minister Justin Trudeau shut the project down after the First Nations took the Canadian government to court and won. Trudeau instead approved two different pipelines, the Kinder Morgan Trans Mountain Expansion Project and another Enbridge Pipeline, that have been deemed not to affect the British Columbia Coast or the Great Bear Rainforest.

In 2012 the Coastal First Nations banned trophy hunting of all bears in their territories of the Great Bear Rainforest, however, the British Columbia government did not do the same. On November 30, 2017, after much public pressure to end the practice, the government of British Columbia banned the trophy hunting of grizzles in the Great Bear Rainforest, but the hunting of black bears remains legal. Black bears are the parent species of Kermode bears and each one killed could be carrying the rare recessive gene that allows Kermode bears to be genetically produced; therefore, the continued hunting of black bears is a threat to the Kermode bear population. Additional concerns in regards to hunting are caused by the under staffing of wildlife officers who enforce the hunting bans as this could allow for illegal killings by poachers. Grizzly bears also pose a threat to Kermode bear populations because of the decline of natural resources, especially salmon populations that are becoming subject to climate change and over fishing. Using non-invasive hair-line traps scientists have been tracking the movement of Grizzles across the Coasts and Rainforest. They have found Grizzles are moving into Black bear and Kermode bear salmon feeding grounds more often. This disrupts the feeding of Kermode and Black bears as they often retreat once Grizzles arrive.

One of the most successful means of conservation for the Spirit bears has come in the form of the Spirit Bear Lodge, a form of ecotourism. The lodge has stimulated the economy of the Klemtu Indian Reserve and has provided education and awareness about British Columbia bears. The lodge provides visitors from all around the world the opportunity to participate in bear sightseeing. Hunting has brought challenges to the lodge however as dead bear carcasses have been spotted and disturbed observers; hunting also makes the bears more cautious making it harder to spot them. However, because the ecotourism has brought about much more economic and environmental benefit than hunting, ecotourism may prevail and cause a complete ban on bear trophy hunting in British Columbia.

In October 2012, it was announced that a Kermode bear would be housed at the British Columbia Wildlife Park in Kamloops, BC, believed to be the only such recessive gene from a subspecies bear in captivity. The yearling cub was found abandoned in northwestern British Columbia on the side of Terrace Mountain near Terrace. After two unsuccessful attempts to rehabilitate and release him back into the wild, the cub, now nicknamed ‘Clover’ by handlers, was sent to the park when conservation officers decided that he was not a candidate for relocation. The park has plans to create a custom home for the bear, who has escaped from his temporary enclosure once already. Animal rights group Lifeforce believes that the bear is healthy enough to survive on his own and that he should be relocated and released back into the wild. Provincial government wildlife officials have maintained its position against attempting a long-distance relocation, stating that the risks outweigh the possible benefits, and as of October 2015, the bear remained in captivity.