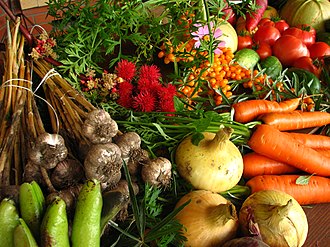 The Danish consumers are the most pro-organic consumers in the world. In fact Denmark has the world’s highest organic share and the most well-developed organic market.

The Export of Danish organic food by country

The development of the EU organic label was develop based on Denmark’s organic food policy and the rules behind the Danish organic food label which at the moment holds the highest rate of recognition among its users in the world respectively 98% and 90% trust the label. The current EU organic label is meant to signal to the consumer that at least 95% of the ingredients used in the processed organic food is from organic origin and 5% considered an acceptable error margin.

All EU countries are subject to the same rules for converting a conventional farm into an organic one. However, in Denmark the whole farm must be converted, whereas in other EU countries it is possible only to convert part of the production.

In particular politicians and the mass media drove the development forward in this period. Danish parliament adopts the world’s first comprehensive legislation on organic farming in 1987, inspired by the story in the media about lobsters dying as a result of oxygen depletion in Danish costal waters (environmental concern).

The organised sale of organic milk was initiated by the organic farmers themselves in 1988 through the establishment of organic dairy circles.

The inspection and certification system

Denmark is exceptional in having an official set of regulations and a single unique symbol for organic products, and also in that the State undertakes inspections. In general Danes have great confidence in the state as a serious and neutral body of inspection and labelling.

The “Ø” label is an inspection label launched in 1990. The regulations associated with the Ø label are based on EU legislation – although Danish rules still apply.

Fundamentally the red Ø label signifies that the Danish authorities have carried out a control on the farms and work places that produce, process, package or label the goods in Denmark.  The red Ø-label shows that the latest preparation of the organic product has taken place in a Danish company under inspection of the public authorities. Therefore, the logo can be seen both on foods of Danish origin and on imported foods processed or packaged and labelled in Denmark.

Maintaining confidence in organic production is dependent on adherence to and strengthening of the Ø-label. The production standards on which the symbol is based must satisfy the standards of both consumers and organic producers as to respect for the environment, health, livestock, welfare etc.

Approximately 94 percent of the Danish consumers are familiar with the “Ø”-label. Intensive marketing has created awareness and established great confidence in the label in Denmark.  A study shows that 85 percent of the consumers do not trust foreign organic products without the Ø-label. The more distant the product is, the less confidence the consumers had.

Regarding the EU organic logo, it is the long-term objective of the Danish authorities to support the implementation of the EU label.

Certificates and correct labeling are of the highest priority

In the EU food safety is considered a cornerstone of the food law and in this perspective current standards remain less organized in many other parts of the World. In Denmark food safety is both well organized and a top priority. In particular, food safety is an important aspect to Danish consumers even though food scandals are a very rare phenomenon in Denmark.

Traceability systems are implemented for all food categories and The Danish Veterinary and Food Administration (DVFA) carries out a wide range of controls regarding food safety and food hygiene. The DVFA’s main purpose is to ensure the safety and high quality of food, to advise on healthy eating habits and to protect the consumers against misleading marketing of food. Naturally, organic food has the highest traceability and control in order to ensure that the consumer always buys a healthy sustainable product. However, Danish governmental legislation is strict when it comes to all kinds of foods, wherefore several different certificates and precise labeling is required on all products.

Below are listed the most important labels and their meaning:

The Danish Veterinary and Food Administration’s Keyhole label is a Nordic food label that can help the consumers identify healthier food products within a product group. Foods labelled with the keyhole symbol contain less fat, sugars and salt and more dietary fibre than food products of the same type not carrying the symbol.

The red Ø logo shows that the latest preparation of the product has taken place in a Danish company inspected by the public authorities. Therefore, the logo can be seen on both foods that originate from Danish organic farms and on imported foods that are processed, packed or labeled in Denmark.

The Organic EU logo shows that the organic product is produced and controlled according to the standards in the European legislation (2092/91). It is voluntary to use the Ø logo and mandatory to use the EU logo. The green “Euro-leaf” replaced the old logo in 2010, (which consisted of a blue and green circle with white stars and a corn crop).

NO GMO food in Denmark

What are GM foods?

The key areas of controversy

The key areas of controversy related to GM food are: risk of harm from GM food, whether GM food should be labeled, the role of government regulators, the effect of GM crops on the environment, the impact of GM crops for farmers, including farmers in developing countries, the role of GM crops in feeding the growing world population, and GM crops as part of the industrial agriculture system. Some advocacy groups such as Greenpeace and the World Wildlife Fund have concerns that risks of GM food have not been adequately identified and managed, and have questioned the objectivity of regulatory authorities. Opponents of food derived from GMOs are concerned about the safety of the food itself and wish for GMOs to be banned or at least labeled on the food packages of foods they are in.

No GMO in Danish stores

In Denmark and several other European countries it is required that GM foods should be tested and marked. There are only a few foods with genetically engineered parts that are allowed in Denmark and the other EU countries. These are products of soybean and some corn for animal feed.  No supermarket chains have GM products on the shelves in Denmark today and Smagsriget does not support GM foods in any way. That is why we want you to buy organic food so that you as a consumer can be absolutely certain that you get tasteful, non-pesticide, healthy and GMO free products.

Furthermore, there are currently NO fields with GMO’s in Denmark or the rest of the EU according to The Danish Veterinary and Food Administration.

If you want to reduce the amount of pesticide residue you consume via the food you eat, it would be a good start to begin eating Danish produce as much as possible.

A new report from the national food institute, DTU Førevareinstituttet, shows that Danish fruit and vegetables contain far less pesticide than goods from abroad – in the EU and beyond.