Copenhagen City Hall (Danish: Københavns Rådhus) is the headquarters of the municipal council as well as the Lord mayor of the Copenhagen Municipality, Denmark. The building is situated on City Hall Square in central Copenhagen.

The current building was inaugurated in 1905. It was designed by the architect Martin Nyrop in the National Romantic style but with inspiration from the Siena City Hall. It is dominated by its richly ornamented front, the gilded statue of Absalon just above the balcony and the tall, slim clock tower. The latter is at 105.6 metres one of the tallest buildings in the generally low city of Copenhagen. 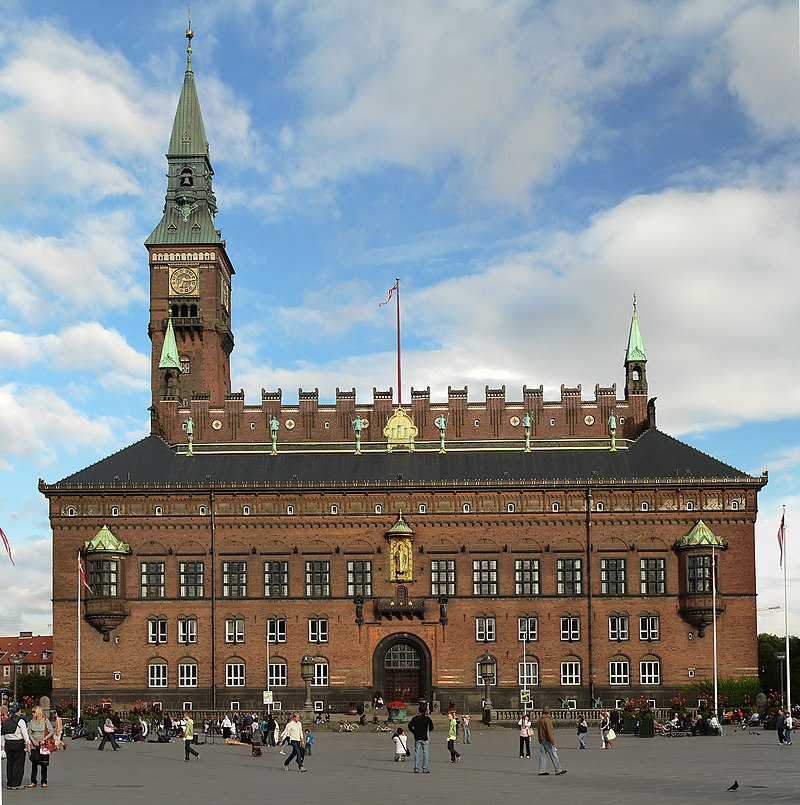 The current city hall was designed by architect Martin Nyrop and the design for the building was inspired by the city hall of Siena, Italy. Construction began in 1892 and the hall was opened on September 12, 1905.

Before the city hall moved to its present location, it was situated at Gammeltorv/Nytorv. The first city hall was in use from about 1479 until it burned down in the great Copenhagen fire of 1728.

The second city hall was built in 1728 and was designed by J.C. Ernst and J.C. Krieger. It burned down in the Copenhagen fire of 1795.

It was not until 1815 that a new city hall, designed by C.F.Hansen, was erected on Nytorv. It was intended to house both the city hall and a court. Today it is still in use as the city court of Copenhagen.

In 2007, the National Bank of Denmark issued a 20 DKK commemorative coin of the tower. 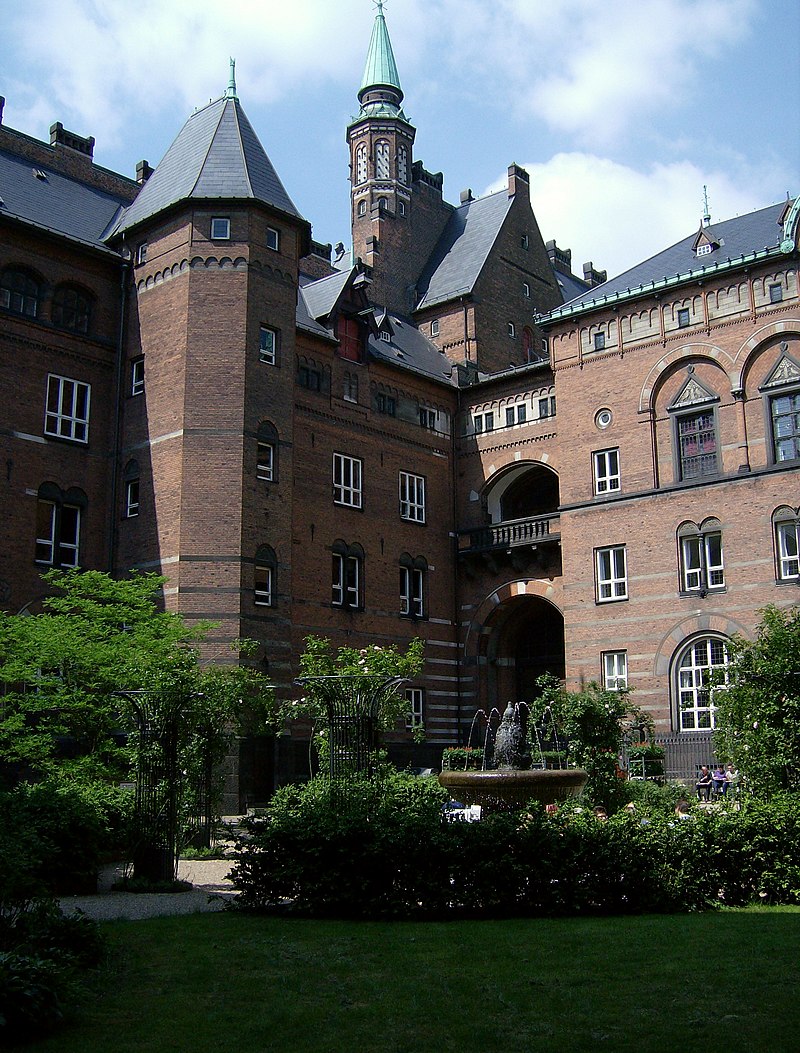 View from the tower. You could properly see Sweden in good weather.

The State Prison in Vridsløselille

Copenhagen Central Fire Station (Danish: Københavns Hovedbrandstation) is the headquarters of Copenhagen Fire Department and located on H.C. Andersens Boulevard just behind Copenhagen City Hall and opposite Tivoli Gardens. It was designed by Ludvig Fenger and inaugurated in 1892.

In the middle of the 19th century, the fire station in the former St. Nicolai’s Church had become outdated. It was therefore decided to construct a new purpose-built central fire station on the former grounds of the city’s Western Rampart. The Bastioned Fortifications until now enclosing Copenhagen had recently been disbanded and the vacant land was now used for a number of large public building projects.

The recently instituted post of City Architect held by Ludvig Fenger was put in charge of the project.

Construction began in 1889 and the new Central Fire Station was inaugurated on 30 April 1892. At that time, the City Hall had still not been built and the new premises therefore had an unhindered view of the haymarket which was located where the City Hall Square is today. The tower of the building was also used in training with life nets and use of tall fire ladders. 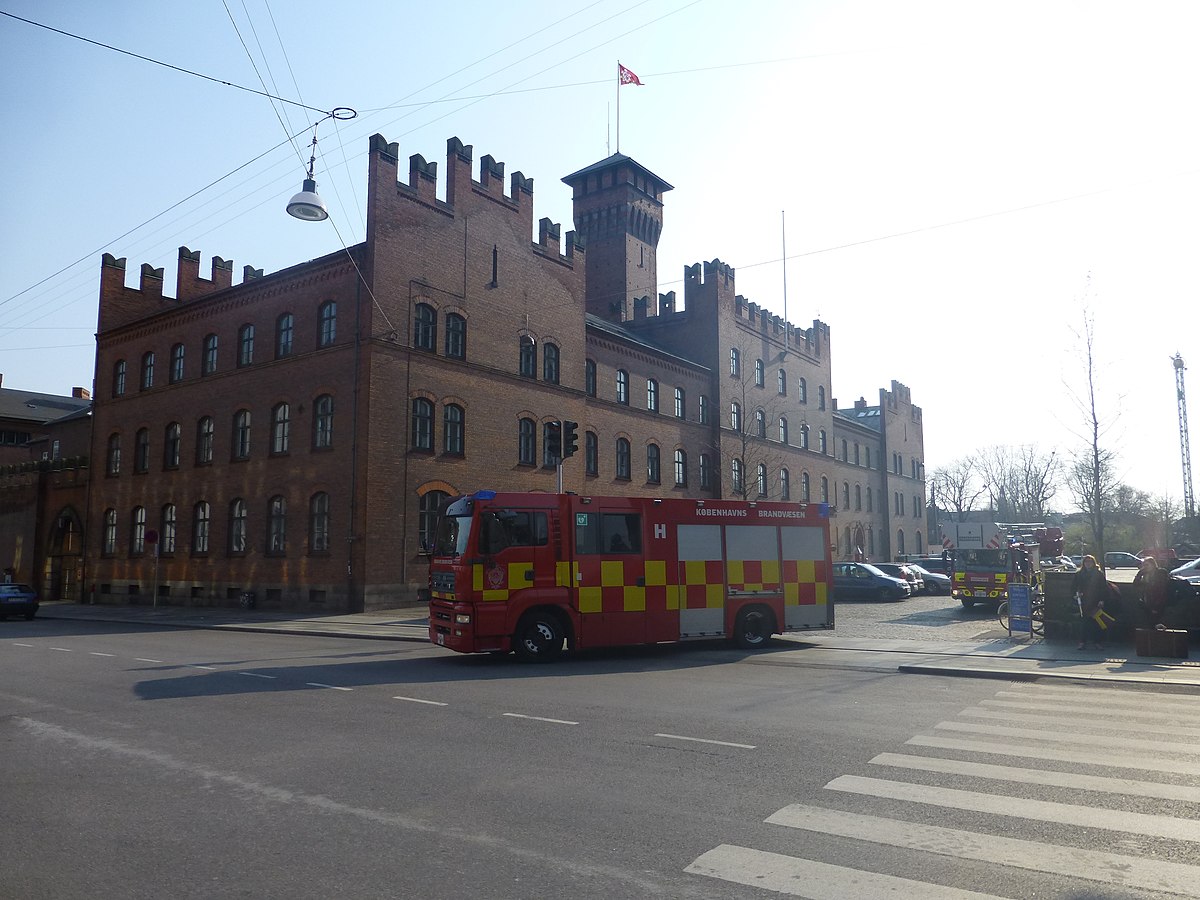 The Central Fire Station is built to a Historicist design. With its crenellated gables, ogival gates and tower, the main source of inspiration is Medieval North Italian castle architecture.

The fire station houses the alarm central for the entire Greater Copenhagen area. It also contains most of the administrative functions of the Copenhagen Fire Department.

The Lur Blowers (Danish: Lirblæserne) is a monument located next to City Hall in Copenhagen, Denmark, consisting of a bronze sculpture of two lur players mounted on top of a tall terracotta column. The monument was a gift to the City of Copenhagen from the Carlsberg Foundation and New Carlsberg Foundation on the occasion of the centenary of the birth of Carlsberg founder J. C. Jacobsen.

The monument stands 20 metres (66 ft) tall. The sculpture at the top of the column consists of two male figures standing very close together, wearing capes and helmets, each holding a raised lur. The compactness of the composition is a result of a design change late in the process, since the original design featured only a single lur blower. The decision to change the design was based on the fact that lurs are always tuned in pairs. The two lurs are inverted, as is seen with the Brudevælte Lurs.

The column is made of red brick and bears the inscription “J.C. JACOBSEN•CARLSBERG 1811•2•SEPTEMBER•1911”. The two columns of St. Mark and St. Thomas on the Piazzetta di San Marco were a source of inspiration. 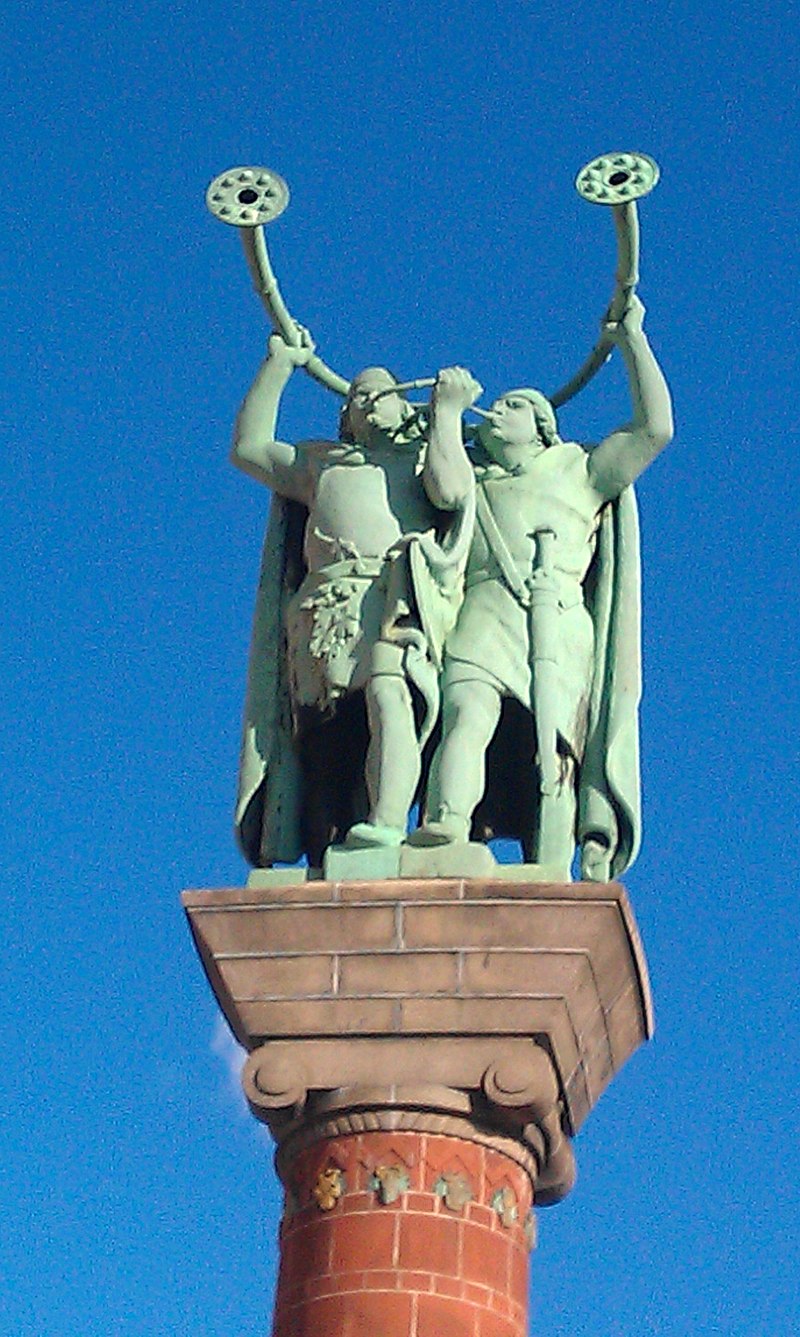 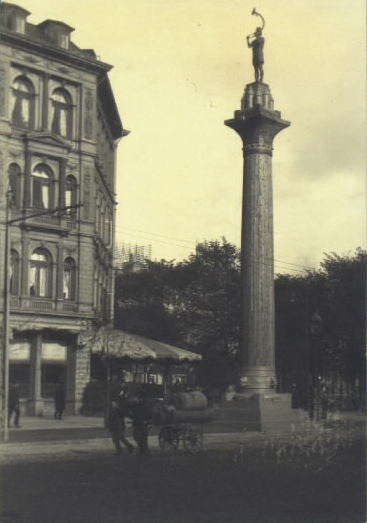 A monument featuring a lur blower on the new City Hall Square was first proposed by Lorenz Frølich about 1890. Martin Nyrop adopted the idea and originally envisioned two columns flanking the entrance to City Hall Square from Vesterbrogade, each topped by a Heimdallr figure with Gjallarhorn.

A mock-up of one column was installed in front of the Central Hotel in 1901. It consisted of a wooden column designed by Nyrop and a plaster model of the Heimdallr figure designed by Anders Bundgaard.

Carlsberg’s victory column seen in an illustration from Illustreret Tidende 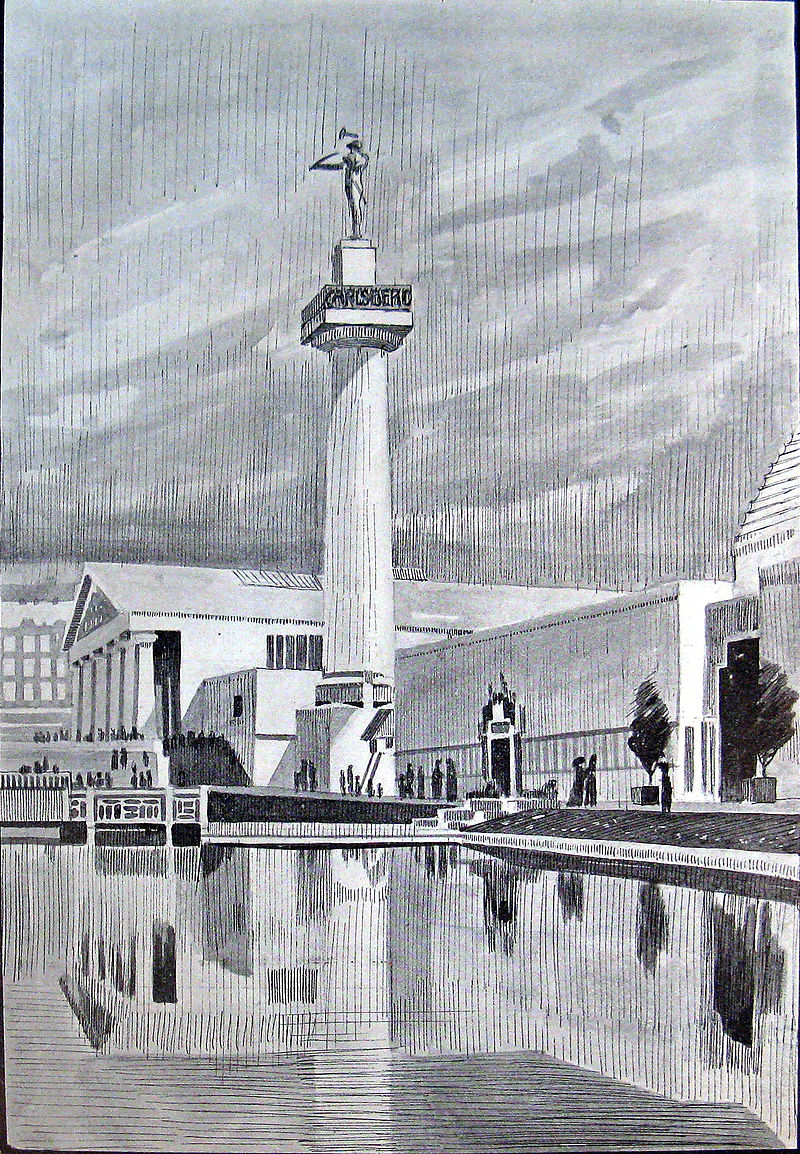 At the 1909 Danish National Exhibition in Aarhus, Carlsberg participated both with a display in the Industry Hall and a victory column. The latter revived the idea of a column carrying a sculpture of a lur blower. The victory column was designed by Anton Rosen, the leading architect of the exhibition, who also designed a triumphal arch for Tuborg on an adjacent site. Both structures were built in white-painted wood.

The Carlsberg Foundation and New Carlsberg Foundation later decided to donate a permanent lur-blower monument to the City of Copenhagen to mark the centenary of the birth of J. C. Jacobsen on 2 September 1911. The project was moved to the small plaza next to the City Hall. Rosen designed the column, and the sculptor Siegfried Wagner was charged with the design of the sculpture group. The monument was inaugurated in 1914. 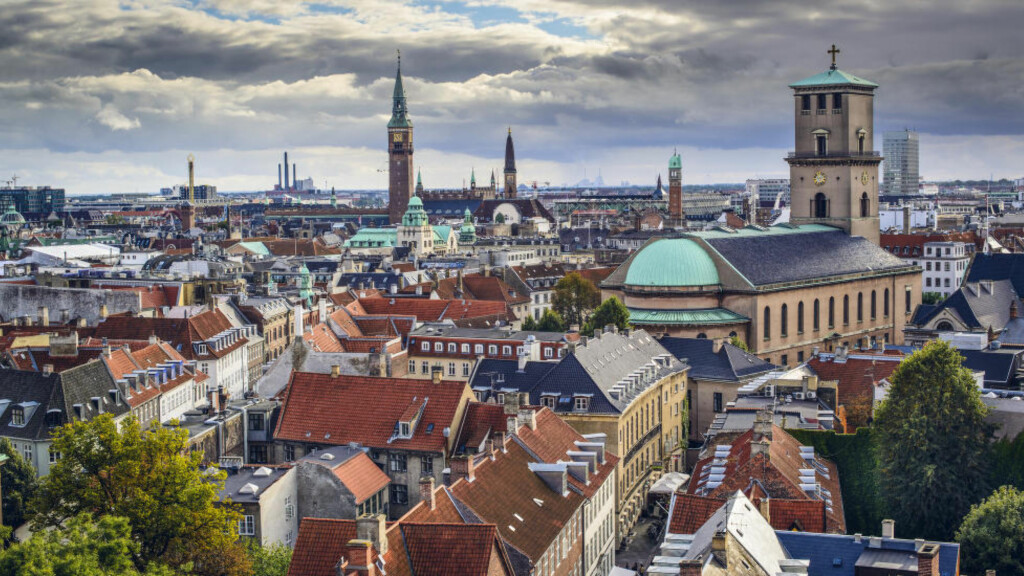