The group of seven men aged between 37 and 47 were described as ‘predatory and cynical’ by a judge after being convicted on Friday following a five-month trial, at Oxford Crown Court.

The court heard how the gang would often abuse girls aged between 13 and 15 in a ‘s wagon’ with licence plate ending ‘SHG’. 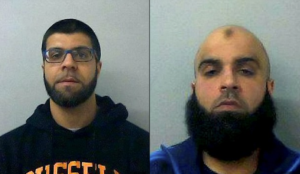