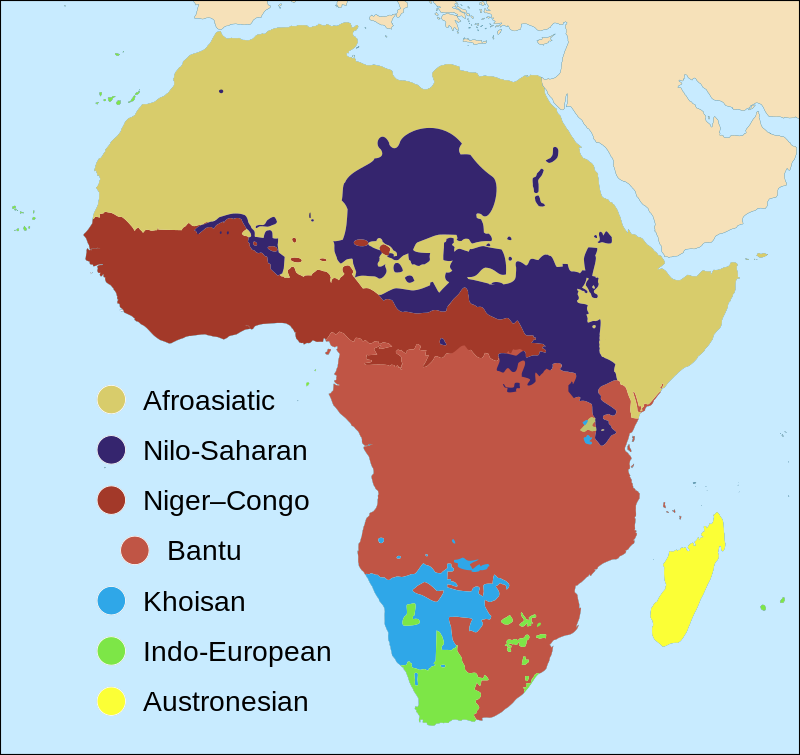 The languages of Africa are divided into six major language families:

There are several other small families and language isolates, as well as languages that have yet to be classified. In addition, Africa has a wide variety of sign languages, many of which are language isolates (see below).

The total number of languages natively spoken in Africa is variously estimated (depending on the delineation of language vs. dialect) at between 1,250 and 2,100, and by some counts at “over 3,000”, Nigeria alone has over 500 languages (according to the count of SIL Ethnologue), one of the greatest concentrations of linguistic diversity in the world. However, “One of the notable differences between Africa and most other linguistic areas is its relative uniformity. With few exceptions, all of Africa’s languages have been gathered into four major phyla.”

Around a hundred languages are widely used for inter-ethnic communication. Arabic, Somali, Berber, Amharic, Oromo, Igbo, Swahili, Hausa, Manding, Fulani and Yoruba are spoken by tens of millions of people. Twelve dialect clusters (which may group up to a hundred linguistic varieties) are spoken by 75 percent, and fifteen by 85 percent, of Africans as a first or additional language. Although many mid-sized languages are used on the radio, in newspapers and in primary-school education, and some of the larger ones are considered national languages, only a few are official at the national level. The African Union declared 2006 the “Year of African Languages”.

English, French and Portuguese are important languages in Africa. About 130 million, 115 million and 30 million Africans, respectively, speak them as either native or secondary languages. Portuguese has become the national language of Angola.

Through (among other factors) sheer demographic weight, Africans are increasingly taking ownership of these three world languages and having an ever-greater influence on their development and growth.

Quite often, only one term is used for both animal and meat; the word nama or nyama for animal/meat is particularly widespread in otherwise widely divergent African languages.

The following is a table displaying the number of speakers of given languages within Africa: