A killifish is any of various oviparous (egg-laying) cyprinodontiform fish (including families Aplocheilidae, Cyprinodontidae, Fundulidae, Profundulidae and Valenciidae). Altogether, there are some 1270 different species of killifish, the biggest family being Rivulidae, containing more than 320 species. Because of living in ephemeral waters, the eggs of most killifish can survive periods of partial dehydration. Many of the species rely on such a diapause, since the eggs would not survive more than a few weeks if entirely submerged in water. Like seeds, the eggs can be sent by mail without water. The adults of some species, such as Kryptolebias marmoratus, can additionally survive out of the water for several weeks. Most killies are small fish, from one to two inches (2.5 to 5 cm), with the largest species growing to just under six inches (15 cm).

The word killifish is of uncertain origin, but is likely to have come from the Dutch kil for a kill (small stream). Although killifish is sometimes used as an English equivalent to the taxonomical term Cyprinodontidae, some species belonging to that family have their own common names, such as the pupfish and the mummichog. 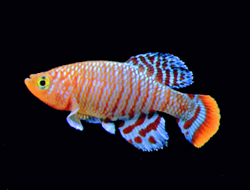 Thanks to the genetic diversity of the species, killifish in the Eastern US have evolved within a relatively short period of time (50–60 years) resistance against levels of dioxins, PCBs, mercury, and other industrial chemicals up to 8,000 times higher than the lethal dose. Sequencing the genomes of the adapted individuals showed a common set of mutations among the pollution-tolerant fish, many of which helping to deactivate or turn off a molecular pathway responsible for a large part of the cellular damage caused by the chemicals.

Killifish were found to fare relatively well in the wake of the Deepwater Horizon oil spill.