Schloss Bensberg, in the district of Bensberg in Bergisch Gladbach, Germany (North Rhine-Westphalia) is a hunting lodge built in the early 18th century and now used as a hotel.

Johann Wilhelm II (popularly: “Jan Wellem”) reigned as Duke of Jülich and Berg from 1679 to 1716. Johann Wilhelm followed his father Philipp Wilhelm as 18th elector of the Palatinate. In the autumn season he moved from his residence in the Düsseldorf castle (picture further down) to the hunt at Bensberg. The neighboring King’s forest was his favorite hunting ground. Jan Wellems second wife Anna Maria Luisa de ‘ Medici, daughter of the Grand Duke of Tuscany, raved about the view of the old Bensberg castle on the hilly surroundings, which she reminded of Tuscany.
Probably his wife, Jan Wavem 1703 appointed the Count Matteo D ‘ Alberti with the construction of a new castle in the Baroque style. Until 1711, the Venetian master builder created a magnificent hunting lodge on the model of Schönbrunn Palace. The central axis of the building complex is exactly aligned to the Cologne Cathedral. For interior design, the elector engaged renowned contemporary artists such as Antonio Bellucci, Giovanni Antonio Pellegrini, Jan Weenix and Domenico Zanetti. When Goethe 1774 visited the castle, his companion Johann Georg Jacobi wrote in his diary: “Castle and village lie on a high mountain, from which one sees many miles full of forests, fields and pagans, in the distance a stretch of the Rhine and the famous seven mountains. […] I believe that the gods will drink their nectar on a silver cloud and overlook half the earth! ”
Goethe himself wrote in the 14th book in Poetry and Truth: “It is more clear to me a ride to the hunting castle Bensberg, which was located on the right side of the Rhine, enjoying the most glorious view. What delighted me there above all dimensions were the wall decorations by Weenix… ”
Jan Wavem no longer experienced the completion of his representative mountain hunting castle. When he died in 1716, the decline of the princely castle was already marked. The following rulers resided more in the Palatinate than in the Duchy of Berg and rarely visited the castle.

At the beginning of the Coalition Wars, 1792 was fought between the French Revolutionary Army and the Austrian regiments at the Battle of Jemappes against the resistance of the castle Countess Helena Theresa Moureaux, in January 1793 in the Castle Bensberg a field hospital was set up, which had to record the injured in the following years. It was under the command of the city commander of Cologne. Time and again it was difficult to bring the necessary furnishings, straw for the storage of the injured and firewood. Also, there were always bottlenecks with the food. Moreover, the hygienic conditions were extremely poor. In March 1793, for the first time, typhus broke out, which demanded numerous victims. So that the plague could not spread further, the corpses were created in the fastest way with carts down into the milk borntal and verscharrte them there in large mass graves. Similarly, the French 1813 also set up a hospital in Bensberg Castle. Typhoid also broke out, which in turn led to many deaths, which were likewise buried in the milk borntal near the imperial tombs. With the Imperial cemetery and the French cemetery, the dead soldiers were erected memorials in the milk borntal.

From 1840 to 1918 the castle served as a Prussian cadet institution. After the First World War, a barracks was set up for occupying troops. After that, the castle, which is now heavily refurbished, had no adequate use from 1922. Parts of the huge building were used for a long time by the municipal administration Bensberg and the Evangelical Church. In the meantime, up to 41 homeless families were accommodated here. From 1935 to 1945, the “Nazis” established a national political educational institution (official abbreviation: NPEA, also called NAPOLA) there. After 1945, it was first used by American, English and from 1946 by Belgian occupying forces. In the period from 1965 to 1997 it served as the seat of the Belgian gymnasium Koninklijk Athene Bensberg. 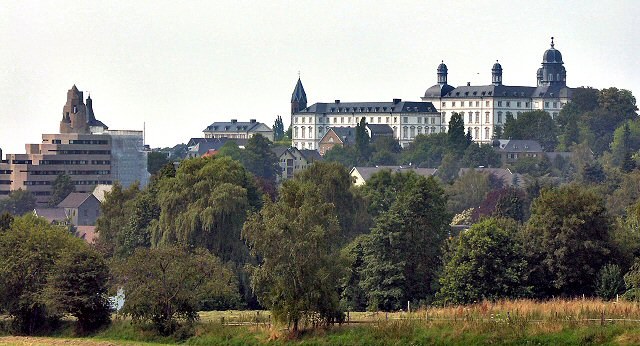 In the year 1997, the former princely hunting lodge for 75 million euros was completely restored and converted into a five-star Grandhotel. The owner is the Aachen Munich life Insurance Company, operator the group Althoff Hotels. It is one of the leading hotels of the world and has 120 rooms. The complex includes three restaurants (including the three-star restaurant Vendôme under the direction of Joachim Wissler), a beauty and health club as well as a jeweller.
There are also major events taking place in the Schloss Bensberg, from 2002 to 2005, for example the annual awards ceremony for the Grimme Online award. At the 2006 FIFA World Cup, Schloss Bensberg was the headquarters of the South Korean national team. In addition to the “Festival of Master Chefs” and the 2009-year-old classic car event Schloss Bensberg classics, the Christmas market at Schloss Bensberg attracts thousands of visitors annually for the third Advent. 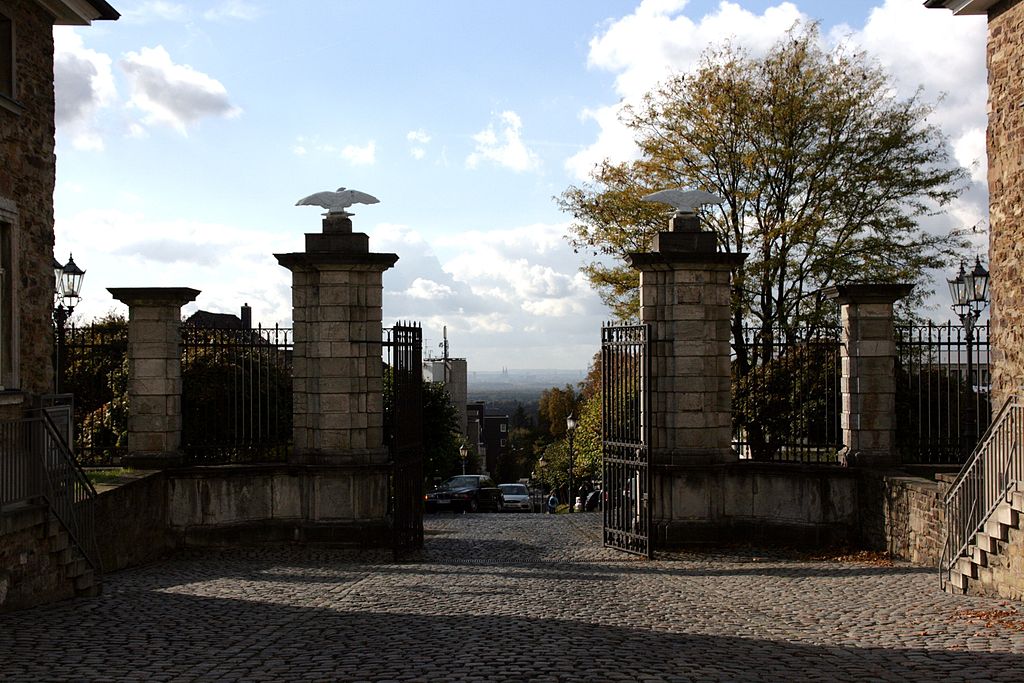 The hunting scenes of Jan Weenix are now in the old Pinakothek in Munich. Silk wallpapers and other paintings are now in the Schloss Augustusburg in Brühl.

The old castle tower is the last remaining structure of the old palace of Düsseldorf which was destroyed by fire in 1882. Today the tower houses the Rhine Maritime Museum.