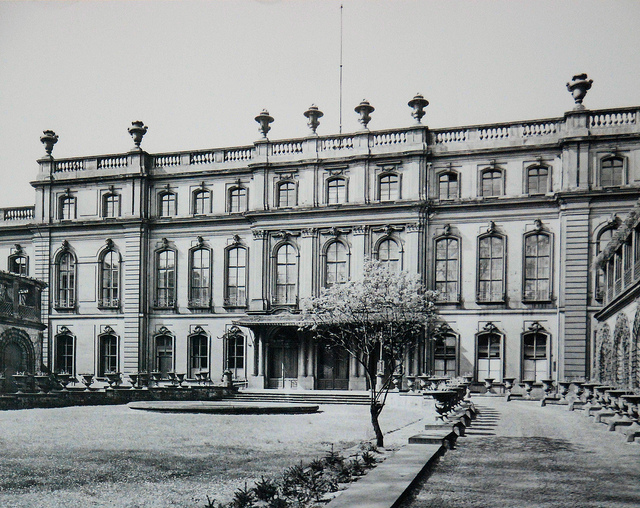 The Prinz-Albrecht-Palais was a Rococo city palace in the historic Friedrichstadt suburb of Berlin, Germany. It was located on Wilhelmstrasse 102 in the present-day Kreuzberg district, in the vicinity of Potsdamer Platz.

The building was erected in 1737–39 in the course of the city development of the boggy grounds in southern Friedrichstadt at the behest of King Frederick William I of Prussia, it was to serve as a residence for the French Baron François Mathieu Vernezobre de Laurieux (1690–1748). The well-off baron and his family had left Paris after the collapse of John Law‘s Mississippi Company in 1720 and befriended with the king. The three-storey building had a courtyard open to the street, two economic wings on the left and right of the entrance, as well as extended gardens in the rear, stretching up to the Berlin Customs Wall in the west. When the King ordered Vernezobre to marry his daughter to Friedrich Wilhelm Quirin von Forcade de Biaix, who she rejected, the marriage was only averted when he agreed to undertake the construction of a prestigious city residence for the King in the Husarenstraße, later renamed Wilhelmstrasse in honor of the King, who died in 1740.

Vernezobre’s heirs had to sell the premises in 1760, and in 1772 they were acquired by the royal House of Hohenzollern as a summer residence of King Frederick William’s daughter Princess Anna Amalia, the youngest sister of Frederick the Great. Upon her death in 1787 it served in 1796 as a quarantine station for the then spectacular smallpox vaccination of the Prussian Crown Prince Friedrich Wilhelm. Occupied by Napoleon‘s troops after the 1806 Battle of Jena-Auerstedt and temporarily used as a depository, the building decayed and fell into disrepair afterwards.

The last chapter in the Palais’ history began after the Machtergreifung in 1933. In May, the headquarters of the newly established Gestapo secret police moved into a neighbouring building around the corner on Prinz-Albrecht-Strasse. When in 1934 the Sicherheitsdienst intelligence agency of the Reichsführer SS Heinrich Himmler took control over the Gestapo, Sicherheitsdienst chief Reinhard Heydrich moved from Munich to the Berlin Prinz-Albrecht-Palais. In 1935 also the neighbouring buildings at 101 Wilhelmstrasse and 103/104 Wilhelmstrasse were taken over and integrated into the large complex, which in 1939 became the main administrative seat of the SS-Reichssicherheitshauptamt (RSHA).

The Palais and the adjacent buildings were destroyed during the Battle of Berlin in a RAF air attack on 23 November 1944. Seized by the Soviet Military Administration in Germany after the war, the realty was incorporated into the American sector of Allied-occupied Berlin. The ruins were cleared in 1955, but the site was left vacant. In 1961 Prince Louis Ferdinand of Prussia, head of the House of Hohenzollern, officially renounced all claims to the realty.