Bückeburg is a town in Lower Saxony, Germany, on the border with North Rhine Westphalia. It is located in the district of Schaumburg close to the northern slopes of the Weserbergland ridge. Population: 21,030. 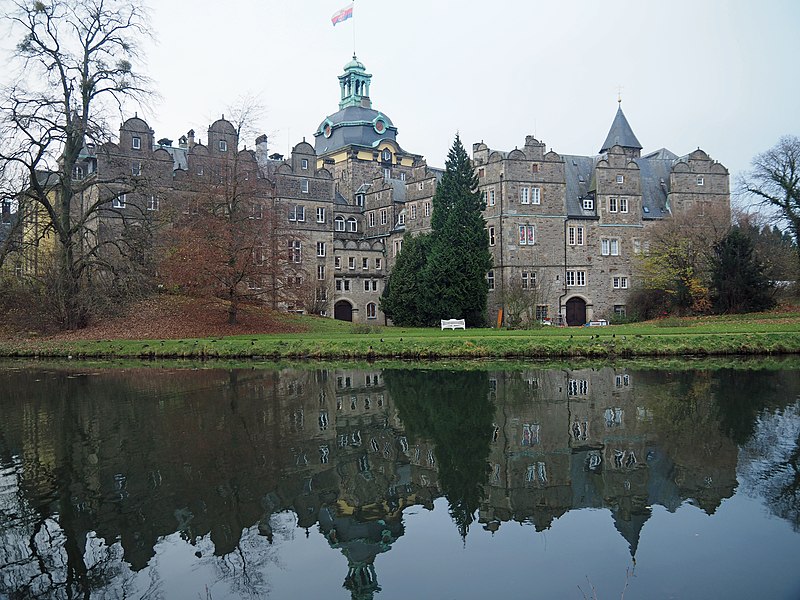 The founding of the Bückeburg as the forerunner of the castle can be traced back to the year 1304, when it was first mentioned in documentary form. At the beginning of the 14th century, Count Adolf VI of Schauenburg and Holstein-Pinneberg built the Bückeburg Water Castle to monitor the important trade route from here. The designation took place after the old Bückeburg, which had already fallen by 1181, in the nearby upper churches, the castle of the Counts of Bukkigaus. Initially, the fortifications consisted only of a defence tower and commercial buildings, before which a small settlement developed over time.
In 1365, the small village of Bukkiborg received the stains justice, and by 1396 Otto I of Schaumburg appointed a clergyman to his newly built chapel. 1492 the castle had only 13 rooms, but developed to 1527 under Johann IV to a fortified complex with ditches, ramparts and bastions.
From 1560 Otto IV of Schaumburg in just four years had the original water Castle remodeled into a representative four-wing castle in the style of the Weser renaissance. In addition, some of the building material of the old plant was integrated into the new structure. Heinrich Schrader and Jacob Kölling were responsible as master builder. West and north wings were connected by the so-called trumpet-gang, a courtyard-located open Gallery.

Otto’s son Ernst von Holstein-Schaumburg, who reigned from 1601 to 1622 and was Prince of 1619, made Bückeburg 1607 his residence. He lent her city rights, created new roads, erected fortifications and buildings; Including the town church with the early Baroque façade of 1615. At the Market square he left the outer castle portal with a flanking administration building, the still existing princely Hofkammer, and the ball house build. The garden, which was created under his father, turned seriously into a typical, quite representative Renaissance garden. 1622 was built as the last of the great Marstall. The Castle Chapel received an early Baroque wooden decoration and was painted completely in the Mannerist style. The filigree wooden decoration of the castle chapel was made by the two Hildesheim sculptors Ebbert the younger and Jonas Wulff.
One day after the death of Ernst, foreign mercenaries stood in the city and the calamity of the Thirty Years ‘ War raged, which is why it was only from 1695 again to construction activities. After 1640 with Otto V. The Counts of Holstein-Schaumburg were extinct in the male line, the castle and parts of the county Schaumburg came to Count Philipp, who founded the line Schaumburg-Lippe. This left the walls of the castle chapel of his reformed faith completely white over whitewash, which is why the art historically most significant fresco paintings disappeared for centuries under the painting. 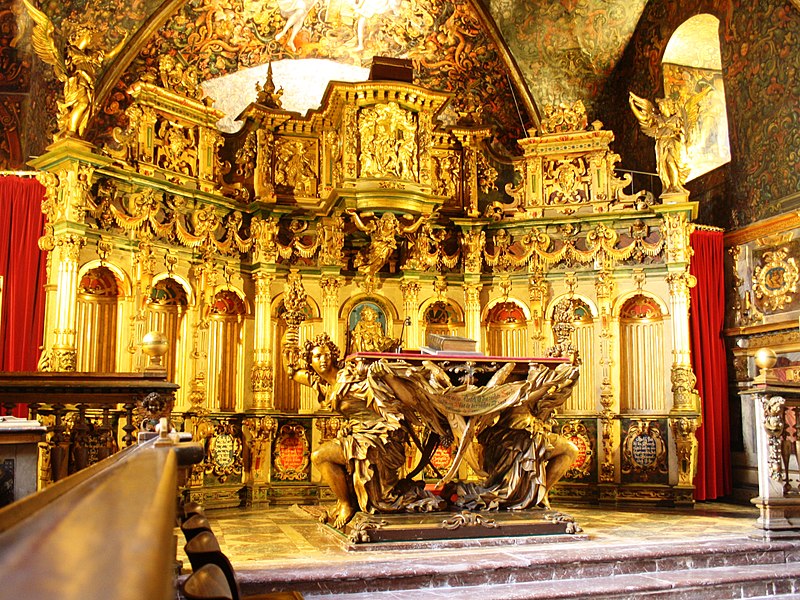 From 1728 to 1748, Albrecht Wolfgang reigned in Schaumburg-Lippe in Schaumburg. During this time, several visits of Voltaire were held in Bückeburg, who received the first inspiration for his famous novel Candide (the castle of the Baron Thunder-ten-Tronckh in Westphalia). 1732 burned in a few hours the North and south wing of the main building, but were rebuilt within a year under confiscation of a fire tax. At the same time, the inner moat was filled with the debris, thus increasing the small space within the wall.
Although Albrecht-Wolfgang had a more generous structure with a further wing cultivation, the revenue of the tax allowed only the reconstruction of the destroyed east and south wing. The new style, now baroque, still shapes the exterior appearance of the castle. The count also had a baroque garden instead of the Renaissance garden, but the garden splendor remained only until 1748.
From 1748 to 1777, Wilhelm reigned in Schaumburg-Lippe, who, as a military strategist, also had his father’s Castle garden equipped with ramparts and ditches, after the garden sculptures were previously spent in the garden of the castle tree. Under his successor Philipp Ernst (1777 – 1787) The castle garden was transformed into a park with a large fruit nursery. His wife Juliane had a part of the garden turned into an English landscape garden. From 1820, large ponds were created in the south of the castle in the so-called Hofwiesen, in which carp were kept until the 1990s. These ponds are now a valuable biotope for amphibians and waterfowl. 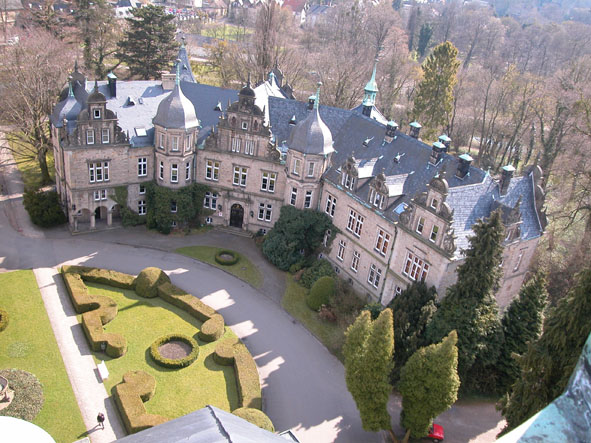 Only from 1860 under Prince Adolf Georg were the castle rooms renovated; Among them the Golden Hall – formerly the White Chamber – which, in the period from 1863 to 1867, was equipped with, among other things, the red silk wallpapers preserved to this day. The castle chapel was also restored from 1879 to 1885. When installing the large organ, the pulpit wall, which had been attached directly to the rear wall, had to be placed almost three metres into the room. Also the 1648 over whitewashed fresco paintings were completely uncovered and one gets a deep insight into the stylistic language of Mannerism today.
Major changes took place from 1893 to 1896, when the tower was given a new wing extension. This cultivation corresponds to the plans which Albrecht Wolfgang had already 1732, namely to move the tower by means of a cultivation in the middle of the castle. The large ballroom occupies the main part of the cultivation (9 meters high, 12 meters wide and almost 24 meters long.) In the basement, a modern kitchen was fitted with the latest technology, which 250 people could supply. At the same time, the office building and the old kitchen were demolished under Otto IV. The castle Atrium received with two semi-circular cavalier houses an almost closed building with a corresponding formal garden.
1911 to 1915, Prince Adolf built a mausoleum at the edge of the Castle Park as a burial place of the princely house. The architect was the Berlin Professor Paul Otto August Baumgarten. The largest gold mosaic dome in Europe with an area of 500 m² is located 25 metres above sea level. This enormous building with its own park is still the burial of the princely family.

The Bückeburg castle has been inhabited throughout since its construction; Originally from the Counts to Holstein-Schaumburg and from 1640 to the members of the Count’s, later princely family to Schaumburg-Lippe. Today Alexander Prinz lives in Schaumburg-Lippe in the castle.
Since 1925 individual rooms have been visited, including the Castle Chapel, the Golden Hall and the large ballroom. Since May 2004, the Marstall is home to the riding school Bückeburg, which shows and cultivates the equestrianism of the European epochs of the 11th to 17th century. Schloss Bückeburg is also the venue for various festivals and exhibitions, for example the “Country Game”, which takes place every year in early summer, the “Christmas Magic”, which is held during the first two Advent weekends each year within the castle And in the surroundings takes place and which according to its own information about 70,000 people visit each year, as well as the medieval market “mediaeval fantasy Spectaculum” in July. Great interest in the audience is also found in classic car rallies, into which the castle is included as a station. For some time, civil marriages in the Baroque music hall are possible, and the castle chapel can now be used by couples of different Christian denominations. The ballroom and other rooms can be rented for private events.
On January 21, 2011, the completed 1:60 precision model of the castle was installed in the marble Hall. A café-restaurant is located in the rooms of the historic kitchen. The guest can get an authentic insight into the former grand Kitchen by using old menus, photos and also original room furnishings.
In the east wing of the castle complex is the Lower Saxon State archive Bückeburg.
The freely accessible Castle Park has a size of over 80 hectares and surrounds the castle from all sides. You can find some of the world’s rarer tree species, such as Süntel beech, swamp cypresses or a mammoth tree almost 25 meters high behind the mausoleum.
In the autumn the master classes of the International Music Academy for Soloists will be held in the Bückeburg Castle. 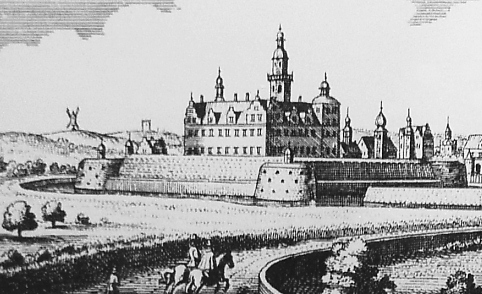 In the town of Obihiro on the island of Hokkaido in Japan there is an original replica of the castle Bückeburg, which was commissioned by a Japanese investor 1989. It is part of the amusement park ‘ Fortune Kingdom ‘, which has already been closed. The course is based on the fairy tales of the Brothers Grimm and includes besides the castle Bückeburg also numerous other German sights, such as a copy of the Bremen City musicians or the monument of the Brothers Grimm in Hanau.
At the opening of the new building on July 01, 1989, alongside Japan’s Prince Tomohito, Philipp Ernst had travelled to Schaumburg-Lippe as well as Bückeburgs then mayor Helmut Preul and the Schaumburg fairytale Singers.