MBANDAKA, Congo (AP) — For 25 years, Patrick Matondo has earned a living buying and selling monkeys, bats and other animals popularly known as bush meat along the Congo River. Standing on the riverbank in Mbandaka, a city affected by the deadly new outbreak of the Ebola virus, the father of five said that for the first time he’s worried he won’t be able to support his family.

“Since Ebola was declared, business has decreased by almost half. It’s really, really bad,” the 47-year-old said, hanging his head. 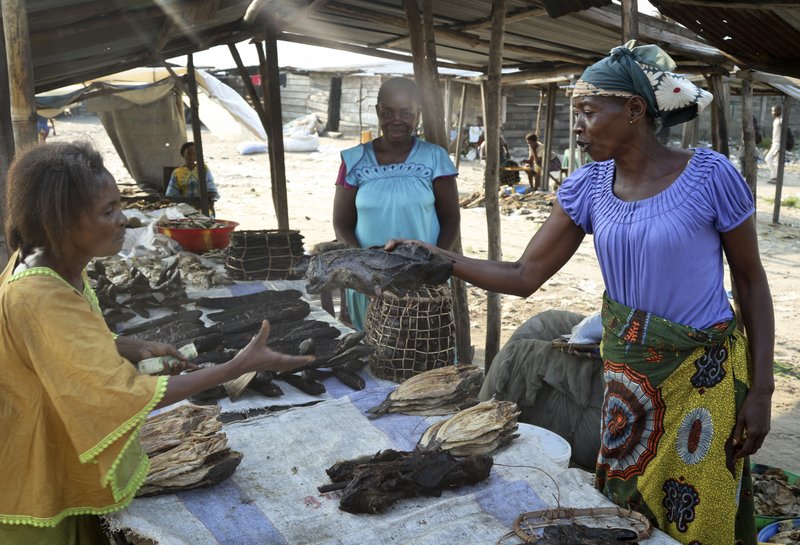 The virus, which spreads through bodily fluids of those infected, has been known to jump from animals such as monkeys and bats to humans. In the West Africa outbreak four years ago that killed more than 11,000 people, it was widely suspected that the epidemic began when a 2-year-old boy in Guinea was infected by a bat.

“Meat is very important for people here. It’s one of the biggest industries in Mbandaka,” said Matondo, a leader in the city’s bush meat association.

Smuggled Bushmeat Is Ebola’s Back Door to America

Less than three miles from Yankee Stadium, the colorful storefronts of African markets lining the Grand Concourse are some of the first signs of a bustling Bronx community that includes immigrants from those West African nations hit hardest by the recent and unprecedented outbreak of the Ebola virus.

We are here today looking for bushmeat, the butchered harvest of African wildlife, and an ethnic delicacy in West African expatriate communities all over the world. A turbaned woman smiles vividly when we enter one small market with canned goods displayed in its window, but the light in her eyes immediately dims when we ask about bushmeat. Shrugging, looking away, she says she knows nothing about it and then, after a moment’s calculation, asks us to repeat the word, as if she didn’t understand what we had said.

In another narrow store, the heat and stench assault us as young children improvise hopscotch on the tile floor before the meat counter. They, too, curtly claim ignorance of bushmeat.

Back outside, the afternoon sun beats down while a man dressed in loose white garments and carrying groceries walks toward us, trailed by a young girl, his daughter. We ask if he eats bushmeat. “Sure,” he says.

Paa George Appiah is from Ghana, but has been living in New York for 10 years. A former GNC employee, he sidesteps questions about his current work status, but is cheery and candid when it comes to bushmeat. “Akarnte is the best, my favorite,” he tells us. Akarnte, he explains, is a type of “grass-cutter.” His brief curbside mimicry of buckteeth suggests a large rabbit, but the grass-cutter is in fact a large rodent, more commonly called a “cane rat” in the U.S. Cane rats are similar in appearance to a guinea pig, prized as a source of protein throughout Ghana and other parts of West Africa, and officially unavailable anywhere in the United States.

Bushmeat, which can range from bat to monkey to lion, including a number of endangered species, is beloved by many African-born Americans, despite the fact that it is illegal in the U.S. In the Bronx, the high price (up to $100 for six or seven pounds, Appiah tells us) attached to bushmeat (or viande de brousse, as it is known in the French-speaking world) indicates a luxury indulgence in the same way illegally imported caviar might for Russian émigrés in Brooklyn.