The Expulsion of Poles by Nazi Germany during World War II was a massive Nazi German operation consisting of the forced resettlement of over 1.7 million Poles from all territories of occupied Poland with the aim of their geopolitical Germanization (see Lebensraum) between 1939–1944.

Adolf Hitler had plans for the extensive colonisation of Polish territories directly opposite the pre-war borders of the Third Reich, making them part of his newly created Reichsgau Wartheland. Eventually his plans grew bigger to include the General Government in the process of ethnic cleansing and genocide. The region was to become a “purely German area” within 15–20 years, as explained by Hitler in March 1941. By that time the General Government was to be cleared of 15 million Polish nationals, and resettled by 4–5 million ethnic Germans.

Expulsion of Poles from villages in the Zamość Region by the SS in December 1942. 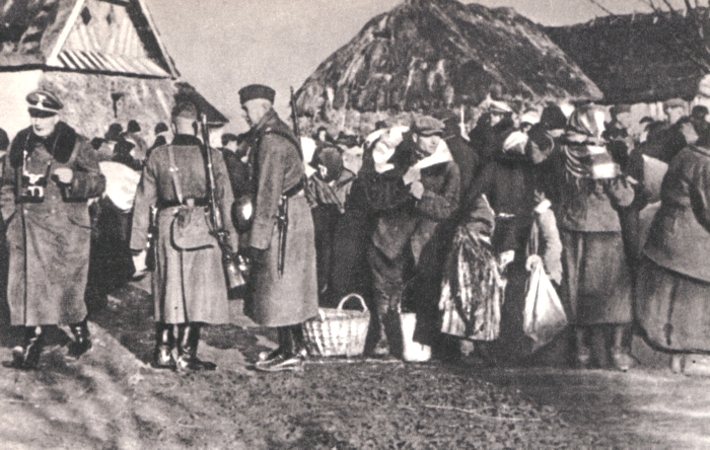 Expulsion from Reichsgau Wartheland. Poles are led to trains under German army escort, as part of the ethnic cleansing of western Poland annexed to the German Reich following the invasion. 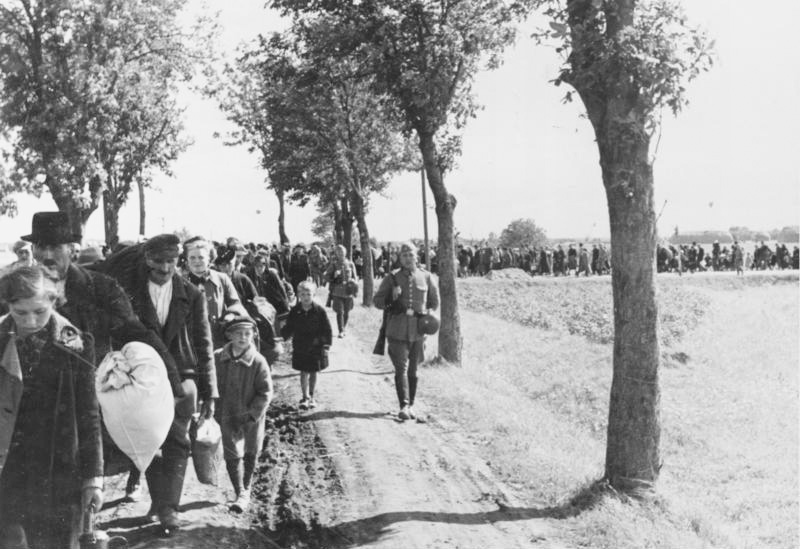 During the occupation of Poland following the German invasion of the country, Nazi expansionist policies were enacted upon its Polish population on an unprecedented scale. In accordance with Nazi ideology the Poles were considered Untermenschen, deemed for slavery and their further elimination, in order to make room for the Germans re-settled from across Europe. Furthermore, Hitler intended to extensively colonize all territories lying to the east of the Third Reich. These were worked out by the RSHA department of the SS in Generalplan Ost (GPO, “[the] General Plan for the East”), which foresaw the deportation of 45 million “non-Germanizable” people from Central & Eastern Europe to West Siberia; of whom 31 million were “racially undesirable”: including 100% of Jews, Poles (85%), Belorussians (75%) and Ukrainians (65%). Poland itself would have been cleared of all Polish people eventually, as 20 million or so were going to be expelled further east. The remaining 3 to 4 million Polish peasants believed to be the Polonized “descendants” of German colonists and migrants (Walddeutsche, Prussian settlers, etc.) – and therefore considered “racially valuable” – would be Germanized and dispersed among the ethnic German population living on formerly Polish soil.  The Nazi leadership hoped that through expulsions to Siberia, famine, mass executions and slave labour, the Polish nation would eventually be completely destroyed.  Experiments in mass sterilization in concentration camps may also have been intended for use on the populations.

The World War II expulsions took place within two specific political entities established by the Nazis, divided from each other by a closed border: one area outright annexed to the Reich in 1939–1941, and another called the General Government, a precursor to the further expansion of the German administrative settlement area. Eventually, as Adolf Hitler explained in March 1941, the General Government would be cleared of all Poles and the region turned into a “purely German area” within 15–20 years, and in place of 15 million Poles, 4–5 million Germans would live there. The area was to become “as German as the Rhineland“.

By 1945 one million German Volksdeutsche from several Eastern European countries and regions such as the Soviet Union, Bessarabia, Romania and the Baltic States had been successfully resettled into Poland during the action called “Heim ins Reich“. The deportation orders specifically required that enough Poles be removed to provide for every settler—that, for instance, if twenty German “master bakers” were sent, twenty Polish bakeries had to have their owners removed. The expulsions of Poles were conducted by two German organisations: the Hauptamt Volksdeutsche Mittelstelle and the Resettlement Department of the “Reich Commissioner for the Consolidation of Germandom” (RKFDV, Reichskomissar für die Festigung deutschen Volkstums), a title held by Heinrich Himmler. The new Germans were put in villages and towns already cleared of their native Polish inhabitants under the banner of Lebensraum. 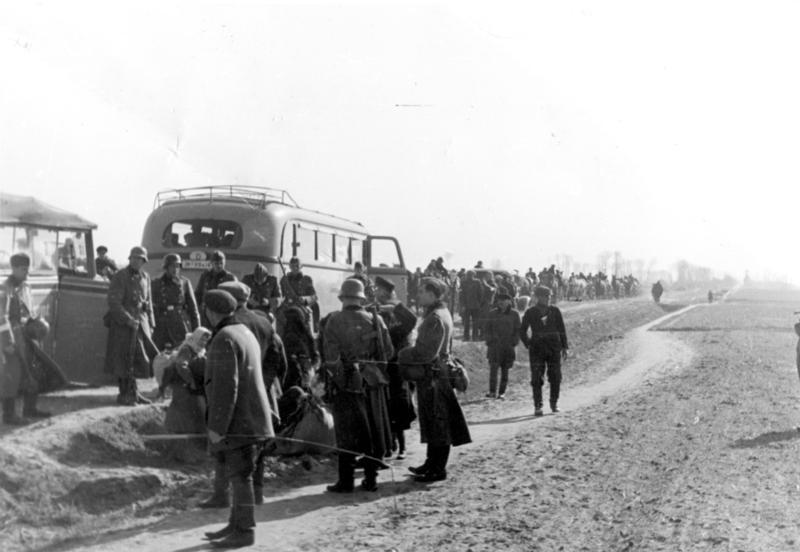 Germanization began with the classification of which people were “racially suitable”, as defined by the Nazi Volksliste.  About 1.7 million Poles were deemed Germanizable, including between one and two hundred thousand Polish children who were taken away from their parents.  For the remainder expulsion was carried out, often in cattle cars in freezing weather, causing the deaths of many, especially children.  They were carried out on short notice, often at night, and the people were allowed only a few belongings.  Ethnic Germans being resettled there were often given Polish homes with half-eaten meals on tables, and unmade beds, where small children had been sleeping at the time of their evictions.  Members of the Hitler Youth and the League of German Girls were assigned the task of overseeing the evictions to ensure that the Poles left behind most of their belongings for the use of the settlers.  This could also mean the separation of entire families, with able-bodied adults being sent to work in Germany while the rest were sent to the General Government.

Together with so-called “wild expulsions”, in four years of Nazi occupation 923,000 Poles were ethnically cleansed from the territories annexed by Germany into the Reich.  According to research conducted by Czesław Łuczak, the Germans expelled the following numbers of Poles from areas annexed into the Reich as well as all others in the period of 1939–1944: 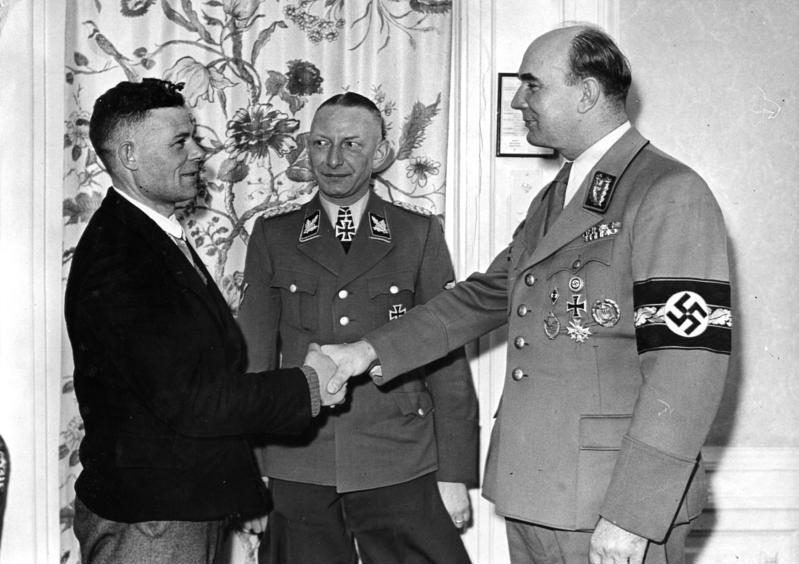 Expulsion of Poles from Czerniejewo in 1939. 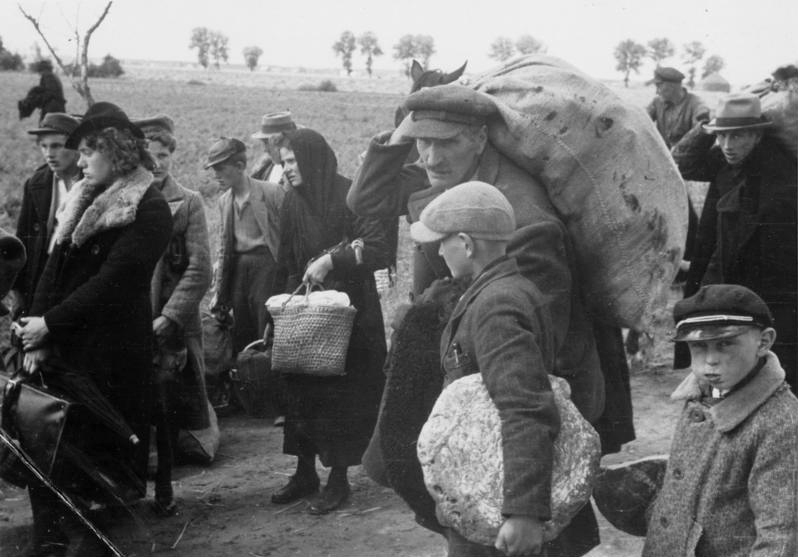 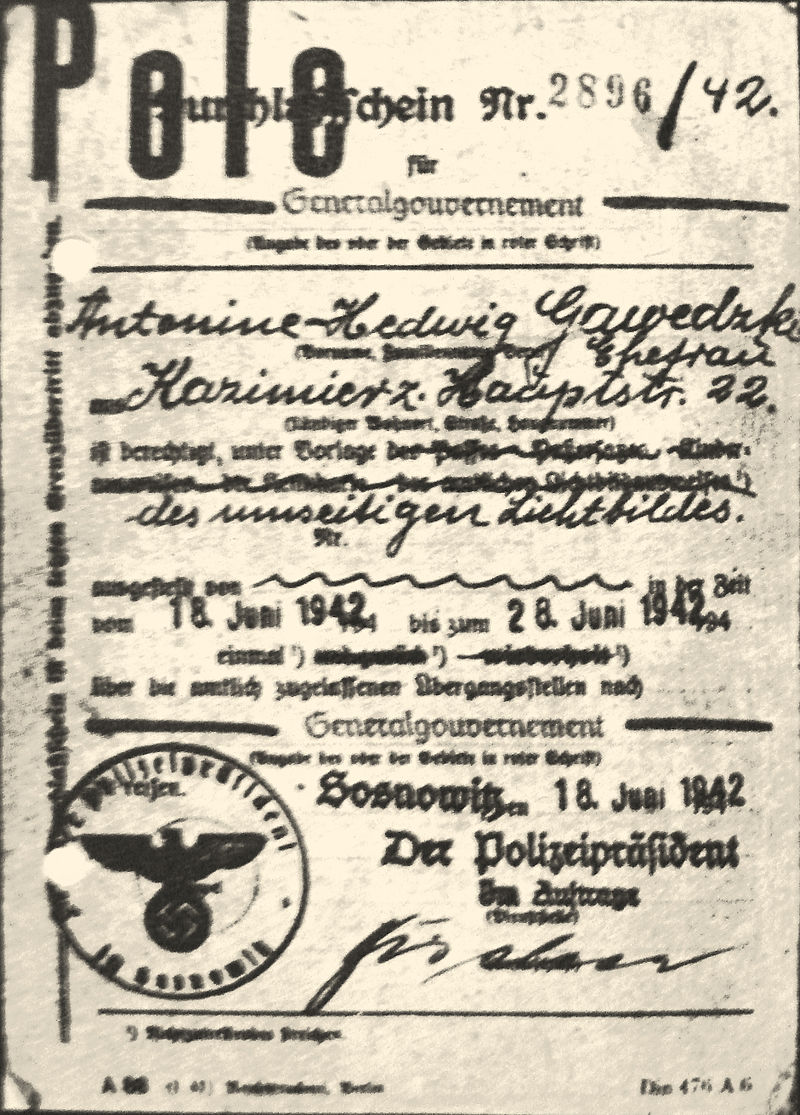 Action Saybusch, 24 September 1940. Expelled Poles await transport at a railway crossing (in this photo, some members of the 129 families deported from the village of Dolna Sól).

Between 1939 and 1940, Nazi expulsions from German-occupied Greater Poland (Wielkopolska) affected 680,000 Poles.  From the city of Poznań (Posen) in Reichsgau Wartheland alone, the Germans expelled 70,000 Poles to the General Government.

The deportations conducted under the leadership of SS-Obergruppenführer Wilhelm Koppe, were supervised by SS-Standartenführer Ernst Damzog, who was also in charge of the daily operation of the Chełmno extermination camp.  By 1945, half a million German Volksdeutsche from Eastern Europe, including the Soviet Union, Volhynia,  Bessarabia, Romania as well as the Baltic Germans, had been resettled into this area during the action called “Heim ins Reich“.

From 1939 to 1940 in German-occupied Pomerelia (named Danzig-West Prussia by the Germans), the expulsions affected 121,765 Poles.  A total of 130,000 Volksdeutsche were resettled there including 57,000 Germans from Eastern Europe, including Soviet Union, Bessarabia, Romania and the Baltic states.

In 1940 and 1941 the Germans evicted 17,000 Polish and Jewish residents from the western districts of the city of Oświęcim; from all places located directly adjacent to the Auschwitz Concentration Camp and also from the villages of Broszkowice, Babice, Brzezinka, Rajsko, Pławy, Harmęże, Bór, and Budy.  The expulsion of Polish civilians was a step towards establishing the “Camp Interest Zone” meant to isolate the camp from the outside world, and to expand economic activity designed to meet the needs of the SS. The ethnic German and Volksdeutsche settlers were being shipped in instead.

The years 1940 to 1944 marked the expulsion of 50,000 Poles from the Żywiec area including 18,000–20,000 Poles during the Action Saybusch operation conducted by the Wehrmacht and Ordnungspolizei in late 1940.  The first of these actions took place on 22 September 1940.  Aktion Saybusch lasted from September to December 1940, with some 3,200 Volksdeutsche brought in Heim ins Reich (Home into the Empire) from Romanian Bukovina. Until the end of the Second World War a third of the Polish population was expelled from this region out of a total of 50,000 inhabitants. Poles were forcibly removed from the region and replaced with about 4,000 Volksdeutsche settlers from Eastern Galicia and Volhynia who were given new latifundia.

The Łódź area was attached by the Germans to occupied Greater Poland (Wielkopolska), renamed Reichsgau Wartheland. The first expulsions from the city of Łódź (renamed Litzmannstadt) took place in 1939. The Nazis, helped by the local Volksdeutsche, expelled Polish families from the osiedle “Montwiłła” Mireckiego first.  Until 1940, all 5,000 residents of this subdivision were expelled. Between 1939 and 1945, from the entire Łódź area (“Regierungsbezirk Litzmannstadt”) including Łódź itself, Sieradz, Pabianice and other settlements,  444,000 persons of Polish ethnicity were expelled – almost 25% of its population.

Expulsions from the General Government

The territory of the German district called the General Government was the second main area of expulsions after the Reichsgau Wartheland. The entity itself was seen only as a temporary measure by the Germans, and served as a large concentration area for Poles to perform hard labour to further Germany’s industry and war effort. Eventually it was to be cleared of Poles as well.

116,000 Poles were expelled from the region of Zamość, as part of the Nazi plan to establish German colonies further east in the conquered territories. Zamość itself was to be renamed Himmlerstadt (“Himmler City”), later changed to Pflugstadt (Plough City), that was to symbolise the German “Plough” that was to “plough” the East. Additionally, almost 30,000 children were kidnapped by the German authorities from their parents in that area for their further Germanization.  The action led to a massive operation by the Polish underground resistance movement led primarily by the Armia Krajowa and Bataliony Chłopskie, known as the Zamość Uprising.

Among the expulsions from the metropolitan centres of Poland, the largest took place in its capital. In October 1940, 115,000 Poles were expelled from their homes in central Warsaw to make room for the Jewish Ghetto constructed by the authorities. After the failure of the Warsaw Uprising, half a million people were expelled from the city as punishment, with 35% of the buildings systematically leveled block by block.